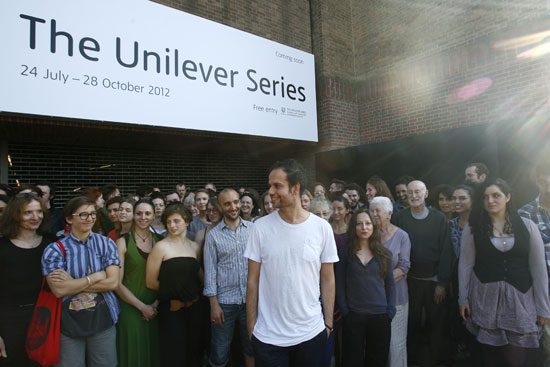 If you visit the Turbine Hall of Tate Modern, its grand concrete floor space will be speckled with visitors. As well as an art space, it has become a social space; somewhere to sit and lounge, to talk and take it all in. Many of the works produced for the Tate’s Turbine Hall commission, The Unilever Series, have considered and contributed to this setting, not least Olafur Eliasson’s famous The Weather Project, the sun that seemed to turn the hall into an indoor picnic space, or Carsten Höller’s Test Site, five stunning slides that made the hall a playground. Tino Sehgal’s new work, These Associations, takes this trend and runs with it.

Indeed, entering the Turbine Hall, there are four people running. Playing a game, chasing and challenging, dodging and sprinting. The rules are inscrutable, yet the game is familiar. More games appear. Each is populated by a small group of performers, not discernible from the museum visitors. The space seems full with people, dashing around, childlike in the gaping hall. The groups begin to conglomerate, joining up, amassing in the depths at the far end of the space. By now there must be sixty or more people in the hall. They generate a flurry of activity as they move in increasingly tight swarms and clusters. They slow to a walk.

A woman in a bright pink skirt catches my eye. She approaches, standing a little closer than I am comfortable with, and looking me in the eye, begins to talk. With a friendly tone she speaks of a wedding. She was meant to help set up, but having excused herself with work commitments, she turns up on the day to find that she does not belong as part of the impressive occasion. She smiles, perhaps expecting a response, then leaves. The lights in the hall dim, and the group re-form stationary in the dark.

They begin a whispered chant. “electric electric electricity” they stutter. The lights in the turbine hall flicker. The chant builds, and the words change. Quoting from Hannah Arendt’s The Human Condition (1958) the performers talk of a reclamation of a natural humanity; the impression given is far from Arendt’s original critique on modernity. By its situation, Sehgal reuses Arendt’s analysis of egotistical human downfall hidden within the words, to highlight the positive potential of humanity. The text, written fifty-four years ago sounds immediate, as if it has been written for this work. This chanted passage recurs cyclically throughout the performance, sometimes whispered and murmured, sometimes shouted, a solemn contrast to the earlier hijinks.

Later another participant approaches me. He talks of his feelings after spending ten years in New York; “I belong to New York City, now its time to go somewhere else.” There it is again, ‘belong’. The performance talks of a group spirit. An idea of community and a sense of belonging. You cannot be at a distance from this performance. The performers surround you, engulf you, and include you. You are immediately in the work. Sehgal’s practice incorporates a necessary loss of control. He has created a set piece, a scenario with which the viewer will engage. With no physical work or remnant, the encounter of the viewer is emphasised; what a person experiences, and chooses to give to the performance is inextricable from the performance itself. The work is made by, and exists in, its experience.

Talking to a stranger is a well-publicised London faux-pas, but here the performers talk to us of themselves, their feelings, and their experiences. In the relationship, subject becomes blurred. They talk of themselves, but for us. This is an exercise in social freedom, the giddy discomfort of an open conversation with a stranger, the release of a grown adult sprinting through a gallery space. The group walk through the Turbine Hall slowly. A sweeping line, humming a single note, filling the space as they pass. The lights turn off in stages, following their movement. I turn and follow, walking with the pack.

Credit:
Tino Sehgal and participants of These Associations outside Tate Modern
Photo courtesy of Johnny Green 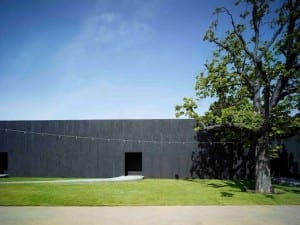 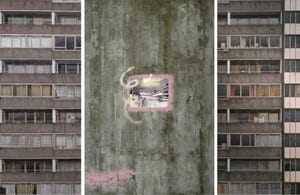 Cityscapes collates artists who respond to elements of urban life in their various practices. Included in this exhibition will be David Hepher, Peter Howson, Patrick Hughes, Lucy Jones, and others. 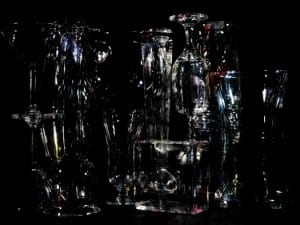