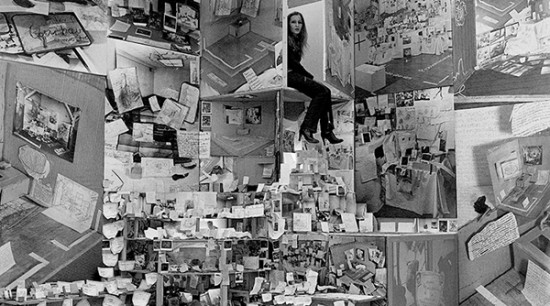 Cooper Gallery, Dundee showcases the first major exhibition in the UK of the work of pre-eminent German conceptual artist Anna Oppermann. Centring on one of her crowded ensembles completed in 1982, the show also catalogues her history through drawings, prints, gallery invites, Polaroids and documentary films. While an interactive archive forms an invitation to scrutinise, through detailed annotations, the intricate complexities of her practice.

Cotoneaster horizontalis dominates the main gallery, staged as corner piece in a gallery famed for having no corners. This floor to ceiling assembly features drawings, trompe l’oeil paintings, photographs, Polaroids, painted texts and small handwritten notes. Scattered between these often propped-up texts and observations are dried roots, tree branches and clay shapes. The aesthetics of the hand-made and handwriting is a recurring motif. As is the evidence of its emotions and concerns. Thoughts are drawn out in haste, with force. Her pencil hardly keeping up with her mind’s pace. Elsewhere, like a sign writer, her poetic statements are drawn with precision and focus. These texts often referencing German art, romanticism and philosophical history. Deeper, towards the ensemble’s background are berries, bags of pencils and white cotton sheets.

Her shrine to perception is a display unit for the psyche. It is disordered, presenting its own associative logic. It is a bewitching and dense schematic laying bare the workings of the mind. Overlapping and repeating are photographs of public sculptures, Polaroids of incidental moments, photographed drawings and photographs that are then sketched or drawn like memories. Each object and image surface mutating through sequences of perspective, form and representation. Among this display are images of herself and stills from TV of women who resemble her. The core of the analysis is unflinchingly self-inspecting.

The gallery is carefully split. While the ensemble demonstrates her dense practice as an artist, a sequence of drawings on an opposite wall give dimension to her work as an academic and art school teacher. Describing the process of her engagement with art, education and philosophy these large-scale drawings read like a film storyboard. They narrate a creative process of minutiae in theatrics, though nothing tussles to be centre stage. At the gallery entrance a digital interactive archive functions as an index to her teeming ensembles. It allows each element to be inspected and compared. Their origins are described and translated, though their purposes in her broader poetic narratives are left vague.

Display cases present ephemera, exhibition invites, essays and titles drawn across the artist’s life: Paradoxical Intentions and The Artists’ Task to Solve Problems. Meanwhile Polaroids and other personal artefacts capture an intensely glamorous woman. The artist is seen in beautiful dresses, parachute silk jumpsuits, heels and fur coats. A film from Documenta in 1977, projected onto the back gallery wall, sees her discuss her processes to a beleaguered interviewer. She is intellectual, sensitive, sharp, nonchalant and melancholy. While her golden glitter eyelashes – flickering like a beacon – suggest her individualism, elegance, and farsighted, progressive vision. 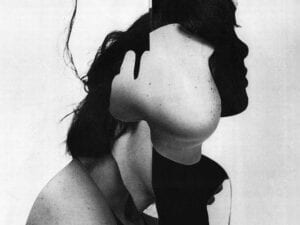 Efrem Zelony-Mindell discusses the allure and ever shifting status of black-and-white image making, upon the release of a new photobook. 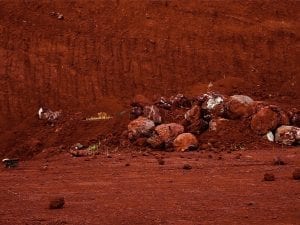 Surrounded by a tumultuous climate, Turkish-born photographer Fatma Bucak channels her Kurdish history through an exhibition at Fondazione Merz. 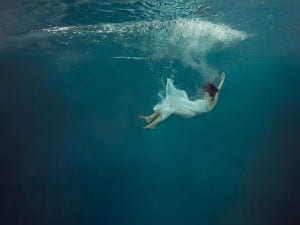 Los Angeles photographic art exposition, photo l.a. returns for its 23rd edition from 16 – 19 January. The long-standing event takes up residence in the iconic LA Mart building for the first time this year.