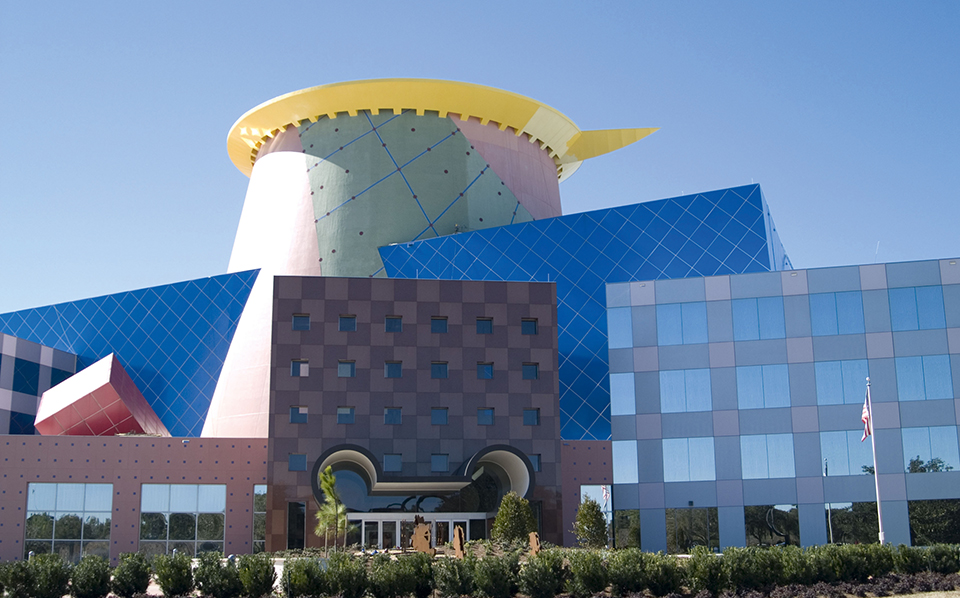 Deliberately vague, postmodernism emerged in the 1970s in literature, design, music and art, both as a moment in time and as a rejection of the shackles of ideologies before it. For many on this cusp of change, the restraints and restrictions of the prevailing modernist ideology had become elitist and idealised. The uncertainty of the post-war years was no longer conducive to creating harmony through modernism, and an acknowledgement of the fractured nature of our existence suddenly seemed a more apt way to move forward across visual, literary and philosophical arenas.

This autumn, the V&A will address this cultural epoch with the benefit of 20 years’ hindsight. The first major in-depth survey of the visual products of the 1970s and 1980s will reference the postmodernism from which they began, and lay bare the contentious term for a new round of discussion and interrogation. Postmodernism: Style and Subversion 1970-1990 addresses architecture, design, popular culture, film and fashion and the manner in which they challenged the singular narrative of modernism, to create a multiplicity of influences that pervaded culture for two decades.

Curated by Glenn Adamson, Head of Graduate Studies at the V&A and Jane Pavitt, Head of Department of History of Design at the Royal College of Art, the V&A has chosen this autumn as an appropriate time for the exhibition because of the hindsight offered, but also the opportunity for collaboration and consultancy with the movement’s leading proponents. Broadly chronological, Postmodernism: Style and Subversion focuses on three key areas – architecture, aspects of popular culture, and finally the movement’s hybridisation with commodity culture of the 1980s. In creating a fairly rigid structure and focus to each segment, Adamson and Pavitt begin to make sense of a notoriously slippery term. Defining postmodernism as “a set of radical strategies that emerged in the 1970s … which had in common an antipathy to modernism,” Adamson argues that in place of the “certainties, progressive narratives and claims to objective quality,” postmodernists offered “historicism, self-referentialilty, bricolage, and, in general, a freedom of choice in design.”

This duplicity between the modern and the postmodern is arguably most apparent in the field of architecture, and it is here that the exhibition takes its starting point. With architects such as Le Corbusier and Oscar Niemeyer creating not only buildings, but whole cities in their vision of how the modern citizen should live, modernist architecture began to represent the dictation of an influential, idealist elite. The “cities in the sky” and towering concrete blocks became representative of the failed Le Corbusian experiment, and architects including Charles Moore and James Stirling began to recognise this, creating new designs based on a pastiche of past and present, high and low, and providing a freedom of interpretation for the user himself.

In exhibiting designs of the AT&T building, devised by Philip Johnson in 1978, the exhibition also acknowledges postmodernism’s return to historical references and emphasis on ornament over simplicity. The building provides an early precursor to the movement’s later conflation with commodification in the way it was implicitly associated with the company logo, and perhaps best represents the break with modernism because of the way Johnson himself had been so closely related to the earlier movement. In so whole-heartedly rejecting the modernist advance to futurist design and materials, Johnson illustrated postmodernism in this astonishing rejection of the rules of modernist good taste.

In choosing architecture as its starting point, the V&A is firmly grounding its focus on postmodernism in the museum’s visual tradition. Although the ideas were seen simultaneously in literature, Anderson argues: “Our show really is about postmodernism as a visual repertoire, not a literary framework or a body of theoretical writings … the use of ‘postmodernism’ as a common term was instigated by Charles Jencks’ 1977 book The Language of Post-modern Architecture. This text was a reaction to the activities of architects in the USA, UK, Japan and Europe over the preceding decade. So it makes sense to ground the narrative within that field.” With a full-scale reconstruction of a Hans Hollein façade from the 1980 Venice Architecture Biennale, the exhibition opens in a suitably large-scale, overwhelming, and flamboyant style. In fact Jencks’ idea of “double coding” (which Anderson describes as “a building or other work that speaks both directly and indirectly about itself”), became hugely appealing to “a generation sick to death with modernist certainty: the meta-structures of postmodernism, its tendency to comment on itself, was a way to introduce ‘complexity and contradiction’ (Robert Venturi’s phrase) to the design process.”

Popular culture itself became the focus of the postmodernist movement and served as the natural vehicle to express the often complicated and occasionally contradictory ideas to the public. Anderson observes: “Popular culture (especially music and other performance) was an effective distribution system for postmodern style and ideas – in this case, you have not just a situation of radical poses influencing vernacular culture, but a more complex interaction between performers and their subcultural fans.”

In mimicking the club-like spaces of contemporary sub-cultures, the V&A explicitly highlights the importance of difference and multiplicity of postmodern times. Saturated with audio-visual installations, the exhibition’s second section is Baudrillard’s Simulacra manifest – a hyperreality of pulsating, over-styled images and landscapes populated by the eccentrics and caricatures of 1980s music and entertainment. Anderson references this section as his personal highlight, with the outrageous parody of the overstated character who took the starring role in Stop Making Sense, the 1980s mockumentary based around the band Talking Heads. Represented by David Byrne’s “Big Suit” Anderson is drawn to its “deadpan humour, exaggeration, and the way it literally performs the idea of larger-than-life celebrity.” This section looks at the subversive stage personas that dominated contemporary stage and screen. From the knowing androgyny of Grace Jones, to the deliberately fetishist Leigh Bowery, the icons of the time referenced an irrational and impossible world. Eventually these influences extended beyond the underground, with both Bowery and Jones becoming prominent figures in the worlds of art and music, with fashion photography from Guy Bourdin and Helmut Newton referencing this parallel world of gender-bending, sex and death.

Another highlight, because like the very idea of postmodernism it is constructed from samples of different aspects of visual and literary history, is the Proust Chair from Alessandro Mendini: “A classic example of postmodern quotation and pastiche. The title is taken from literature, the form adapted from 18thcentury Baroque furniture, and the decoration swiped from a Pointillist painting by Paul Signac. This surface treatment was achieved through the ingenious means of projecting a slide of the painting onto the chair, and daubing paint onto its surface to match the dots. So it bespeaks its own mediated, parasitic design status on multiple levels.”

Arguably this section of the exhibition, and the impact of popular culture on postmodernism as a whole, is understated by Postmodernism: Style and Subversion. The meta-narratives, and very self-referential comedy that we see weekly on our TV screens illustrates the arena where we still, by stealth, witness the postmodern in action. And while postmodernism was for many seen as a tearing down of the elitist barriers and ideals of modernism and a merging of high and low culture, is this omission of these later, populist works perhaps representative of a failure of postmodernism in this regard, or at least of the V&A’s interpretation of it? Anderson counters that the Museum’s remit lies in visual culture: “We do look at TV but only in the context of music video – for two reasons: first, this was a very early and sophisticated example of the kind of self-referentiality; and second it’s a visual and designed medium, whereas narrative TV shows that are thematically postmodern aren’t particularly notable for their style.” As such the exhibition rejects the idea of an overall retrospective of something that is often still in action, and deliberately maintains its focus to allow a thorough representation, and a coherence within the huge variety of areas where the postmodern came to dominate.

The final element of the exhibition most explicitly acknowledges the cynicism and commodification which to an extent became postmodernism’s legacy. Examining the “money talks” attitude and culture of 1980s Britain, the show displays the products of contemporary artists’, architects’ and designers’ fascination with the transformative powers of cold hard cash. Anderson argues: “By the late 1980s, there was exhaustion around the term – for the corporate use of postmodern imagery and techniques as a form of marketing. The end of our show tracks this development, framing 1980s postmodernism as a contest between critical and commercial strategies.” Including Andy Warhol’s Dollar Signs and evidence of the corporate king, Disney’s, foray into contemporary architecture and design, this final section illustrates the demise of postmodernism and its dismissal as a part of the avaricious, right-wing establishment. On this transformation Anderson references Peter Saville in saying, “as he puts it, if you were listening to New Order in 1982 you might well be helping to run the government now, so this issue of generational shift is crucial in tracking the ‘loosening’ and liberating aspects of postmodernism into mass culture now.”

While continually focusing on its traditional design remit, the influences of fine art and its critique of contemporary culture are seen strongly here: “What we were particularly interested to include was work that lay at the intersection between the autonomous art object and the designed commodity – which includes the positioning of art statements in a commercial sphere.” These include its centrepiece, Jenny Holzer’s giant billboard Protect Me From What I Want, and Robert Longo’s Bizarre Love Triangle video for New Order.

As Anderson attributes the demise of postmodernism to this conflation with commercialisation there’s also the difficult fact of its evolving reputation. From a present-day perspective you would argue that, where modernism focuses on functionality and truth, postmodernism emphasises its own falsehoods, cynicism and duplicity of meanings, removing the term from its democratic beginnings. Anderson however directly relates the commercialisation of its leading proponents with the movement’s demise: “I would date postmodernism’s association with cynicism to its latter stages in the 1980s – for me, the first phases are extremely positive, in the sense that they concern themes of liberation, diversity and embrace of vernacular context. The interest in falsehood (or more accurately perhaps, relativism) and the sense of paralysis brought on by self-critique is to me more of an 1980s phenomenon, at least in architecture and design – and it’s brought about primarily because of the corporatisation and mediation of postmodern technique.”

What’s most apparent when studying the postmodern 20 years later is the fact that it remains relevant today. “Postmodernism’s greatest success was in fracturing expectations about period style – so we no longer think of ourselves as working to a single shared ‘look’.” In welcoming this multiplicity of influences and forms, the postmodern had defined what comes after it as “not so much stylistic coherence, but by other issues such as technology (the internet), ethical imperatives (environmentalism), and perhaps production strategies (as in the Chinese economic boom).” While in many ways the postmodern was about a fractured existence, there hasn’t been a defining moment after the postmodern, but rather a variety of new ideas that, in being so many, also reflect the fractured nature of postmodernity itself. Even after its demise it’s returning to us in this very fluctuating indecisiveness.

Postmodernism: Style and Subversion 1970-1990 was showing at the Victoria and Albert Museum, London from 24 September 2011 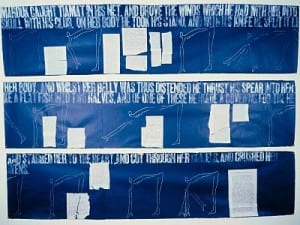 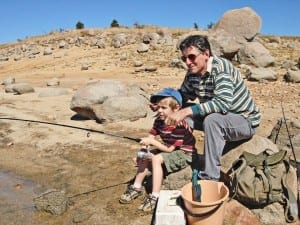