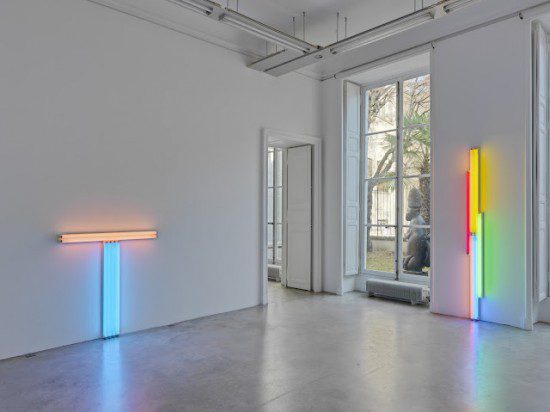 Dan Flavin (1933-1996) was an American minimalist artist famous for creating sculptural objects and installations from fluorescent light fixtures. His early work focused upon drawings and paintings influenced by Abstract Expressionism but the subsequent focus of his work was an exploration of the artistic possibilities of fluorescent light, limiting his possibilities by restricting his materials to commercially available tubing in standard sizes, shapes and colours.

Flavin’s breakthrough came with The diagonal of may 25, 1963 (to Constantin Brancusi) (1963) a simple yellow fluorescent light set at a 45 degree angle. This bold statement effectively challenged art history by stating that a light tube could stand alone as a work of art, thereby attaining cultural significance by reducing the gap between art and everyday life.

This exhibition brings together eight sculptural works from 1963 to 1989, together with three thematic drawings entitled untitled (to the citizens of the Republic of France on the 200th anniversary of their revolution) from 1989. The extent of the works throughout the four exquisite rooms at Galerie Perrotin demonstrate the range of Flavin’s vision. four red horizontals (to Sonja) (1963) exudes a visually arresting aura of red fluorescent light of deep intensity and beauty which complements and transforms it’s physical surroundings. This contrasts with the subtle simplicity found in the cool white fluorescent light of white around a corner (1965) which comprises a single fluorescent tube placed in the intersection of the walls. This light is echoed and expanded in monument for V. Tatlin (1967) which consists of seven tubes of cool white fluorescent light and is part of a series dedicated to Vladimir Tatlin, a leading figure in the Russian Constructivist movement.

These three-dimensional monochromes belie their minimalist construction by embracing (and occasionally unsettling) the viewer in their glow of light, setting a dramatic and affecting tone. They develop a mood from which spirituality and mystery emanate, the result of which is a sense of timelessness. Flavins work dramatically reinvents the space with his installations of infinite combinations offering seduction and confrontation, promise and desolation.

The blue and pink fluorescent light emitted in untitled (to Don Judd, colorist) 4 (1987) has more than a sense of the iconic and of all the installations, has perhaps the most symbolic and architectural resonance. In untitled (to Charlotte) (1987), Flavin blends red, pink, yellow, blue and grey to create a very real sense of emotion. Through reflections on the floor, walls and ceiling, Flavin explores the behaviour of light through his creations. The lights bleed and stray into the space around the fixture itself and illuminate the space – to which the intimacy of the gallery is perfectly suited. It is said that Flavin disliked the term minimalist, and whilst one cannot help but indulge the minimalism on display, there is a definite richness and density beyond the spectral flood of colours that initially captivate your senses.

In order to inspire, one has to believe and Flavin’s belief in his work is perhaps the most illuminating and revelatory aspect of the exhibition. What could so easily have been a neutral and unrewarding love is transformed by the level of engagement in blending colour, light and perspective in a way that goes beyond the physical. Flavin built a lasting legacy, successfully creating monuments of architecture bathed in rays of momentary beauty. 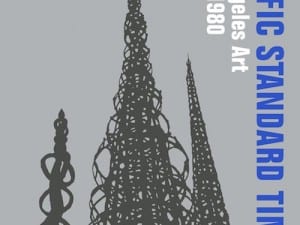 This impressive collection coincides with an ambitious exhibition programme that tells the story of the birth of the L.A. art scene, with particular focus on Judy Chicago, Hammons, Hockney and Ruscha. 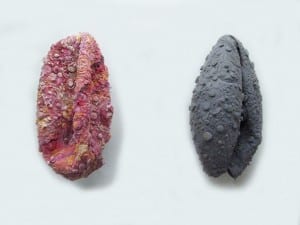 Artistic duo Sarah and Joseph Belknap’s current practice reflects upon our place in the cosmos, their newest works which have been made for the exhibition include sculptures, a site-specific installation, and a multi-channel video. 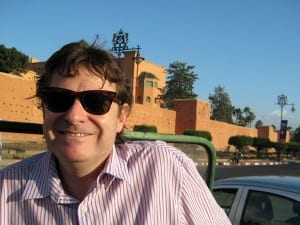