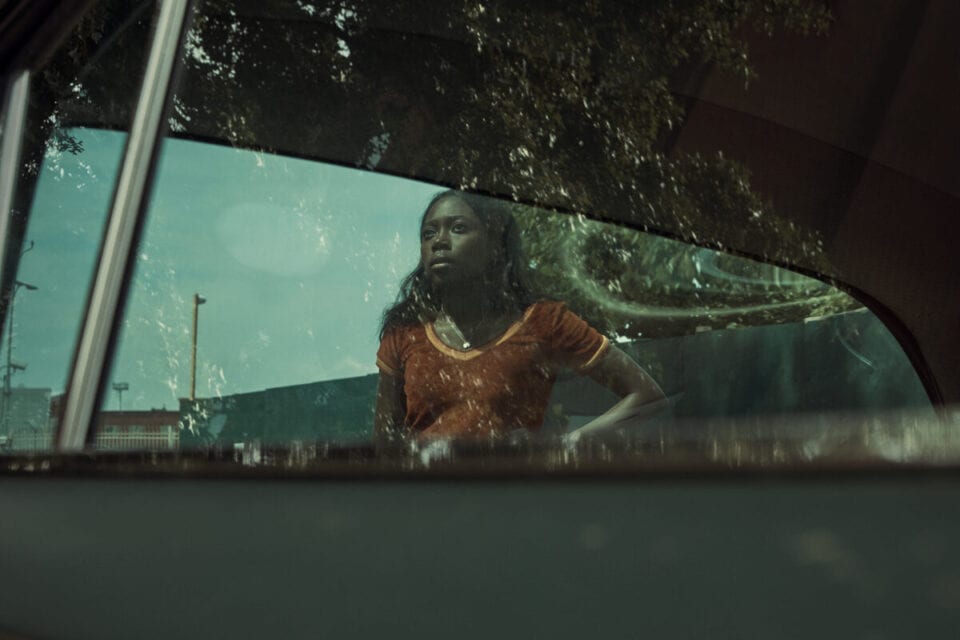 Eric Ogden is a Michigan-born, Brooklyn-based photographer and director. His photographs have been featured in Variety, Wired, The New Yorker, Esquire, New York Times Magazine, ESPN and more. His personal series are drenched with narrative, drawing from palpable psychologies experiences and the landscape. His latest series, Collapse, has been shot across Brooklyn during lockdown.

A: Where did the idea for Collapse begin?
EO:When the pandemic hit and the lockdown happened in NYC, I was stuck at home and out of work, and – like most people – scared. So many things began to spiral out of control, and it seemed the world was entering a new, frightening reality. I tried to get some perspective from history, and started reading here and there about World War II, the holocaust and Ancient Rome, as well as the Iron Age and why scholars think it fell into the Dark Ages. I was also reading some fiction and I began writing some stories, one of which was about people in the early days after some unmentioned apocalyptic event. As the lockdown in Brooklyn eased, I began taking walks and then riding my bike, looking at everything in a new intensified way – more attuned to details – things I had never noticed before. I began to mentally note places where I would want to photograph if the opportunity ever arose. As my writing progressed, I came to the idea of photographing images that felt a kinship to this idea of a dystopian future: a future very close to ours. I began to see things that echoed what I wrote, and vice versa. I found willing subjects in a few wonderful actors I had worked with in the past, and cast a couple other non-actors, and we explored those places I had been biking for weeks.

A: What does the title signify – either literally or metaphorically?
EO: It is quite literal in the sense of an existing world or society falling into chaos and disorder. I think again about the collapse of the Iron Age, which is believed to be from a combination of famine, drought, warring peoples and political uprisings, major trade routes cut off and possibly a plague of some sort. Obviously, we live in very different times, but it is sobering to think how if a few things changed – our food supplies crashed, power grids went down, borders and trade closed, whilst a global pandemic happened – we are completely vulnerable despite our modernity. I started thinking about a working title for the project, and finally landed on a single word. “Collapse” is one of those words that feels like what it means. You feel it physically when you say it out loud.

A: How did you plan out each composition, were they spontaneous or staged?
EO: I had many of the locations already scouted from my bike rides. I would bring my subjects to those places, and once we got there, we would collaborate on what we created. I told them vaguely about the idea, but no specifics. The compositions were mostly spontaneous, and we often found surprises along the way.

A: How have the locations around Brooklyn been transformed for you – in lockdown and in shooting these images?
EO: As I was confined to a smaller world, just a few blocks at first, then a neighborhood, then more neighborhoods, I looked more closely at everything. The world opened up to me. I saw details I hadn’t noticed, and more meaning in the objects I’d passed before in my everyday life, when I was in a rush to work or going out to meet friends. For me now, these places are comforting; a park I’d paid little attention to in the past is now a welcome retreat where I read and think and try to lower my blood pressure. It is really the opposite of how I’ve characterised things in the series.

A: The images are inherently dystopian – with muted colour palettes, dark shadows and stranded characters. How much of this has been achieved through post-production? How do you feel this adds more layers of otherworldliness or disconnect?
EO:There is no digital compositing, no major alterations to speak of in these images. Everything is in camera. I spent a lot of time experimenting with the colour and exposure afterwards – that to me is darkroom work, and how the mood gets enhanced. The sense of isolation is the result of careful compositions, leaving out things that would reveal too busy a world. I was also very conscious of only photographing people alone, that there would be no two people in a single frame, not even another person in the background. I wanted this idea of isolation really brought home.

A: Is there a narrative that ties the images together? Do you feel the characters are intertwined or completely separate?
EO:There is a definite narrative, at least in my mind, though I don’t think it’s important for the viewer to know it. I don’t even think it’s important for the actors to know it, as long as they feel it from me as we are shooting. These characters are living in the same world, their stories intertwine, but they have not found each other. Not yet.

A: How have you communicated the themes of fear, isolation and injustice?
EO:I think it is more expressionistic, that is, it draws on and intensifies a personal feeling from real life events, but it doesn’t comment on them explicitly. I think the fear, distress and isolation is palpable in the characters’ faces, in the lonely compositions, in the faded and at times sickly colors. The choice to use crumbling and empty locations lends to the feeling of unjust world, a disenfranchised society falling apart without supports. By showing people who are lost and alone the viewer will wonder what has happened. No one is there to help, no leader to guide the people, everyone is essentially on their own. While shooting on a couple of deserted streets we came across camper vans and trailers where people were living, they had set up these temporary homes. The economic gap is now a chasm.

I was winding down the series as the national police protests began, and the greater unrest highlighting decades of structural racism, a national reckoning a long time in the making. There are some images that allude to this, more obviously in the image of a blown-out police car, tangentially in some other images, but mostly I was just keeping the through-line of my dystopian narrative in mind as I photographed. The idea of citizens under surveillance, a militarized state, the paranoia that would come from that also runs through this series. All of this is just ratcheting up our own reality. It’s not a great leap to make.

But this is me overthinking it after the fact. When I shoot, I am not conscious of any of this. I think you can read these things into the images or not, or maybe there is something else there entirely. I think photographs gain power by their very ambiguity, how their meaning can shift and change over time, but always – hopefully – have something to say to new people in new times.

A: How do you feel this particular body of work fits in with your other series?
EO: I think it fits into and builds on my other work. The tension, the sense of mystery, the cinematic mood, the worldview, is all there as in my past work, but Collapse feels much more focused. There is a lot churning under the surface here, a well of deep sadness, a real anger, and fear of course. But there is hope, too, even if it’s in the beauty of a broken world. Of course, all of these things are there without saying it outright.

A: What else do you have planned in 2020 and beyond?
EO: I have a few other projects in mind. One project I had gained a lot of momentum on right before the pandemic hit, so I hope to pick up on that where I left off. I am loath to talk too much about next creative plans for fear of jinxing myself. I like to keep things under wraps until they are closer to seeing the world. But I’m excited. I feel like I should say that I am hopeful, too. Creating a dystopian vision in my art does not mean I’m a pessimist. For me it is a way of working through things, expressing internal and external darkness. It’s surprising how much fun you can have creating a vision of a collapsing world. But living in one that you have no control over, however, is less fun. Let’s hope for better things in our own reality. There is potential for great change.

A hugely influential American photographer and film maker, Paul Strand, will be featured in a major retrospective at the Victoria and Albert Museum, London, as the first exhibition in the UK since his death. We catch up with Martin Barnes, the Senior Curator of Photographs at the V&A to discuss the impact of the work that resonates today.