An Insight into the Work of UK Artist Samuel Harriman 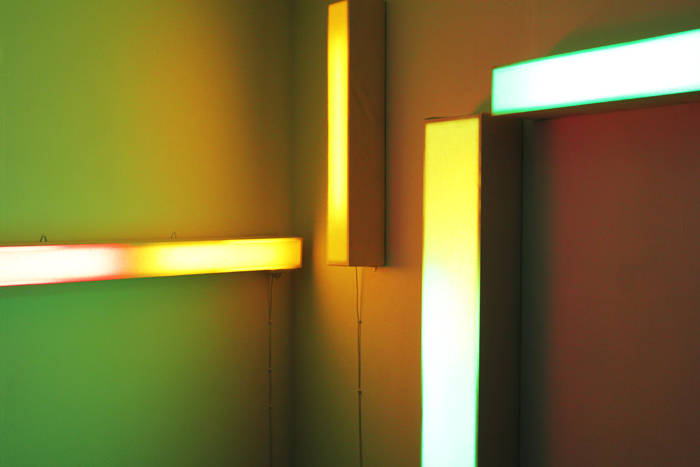 Samuel Harriman is a British artist based in Oxford. His work has been exhibited across the UK, most recently at Light Night Leeds, the UK’s first and largest Nuit Blanche. His work consists primarily of light, however, by using painterly processes, he combines the mediums of light installation and painting to intonate the point that the use of light is a form of painting. He uses both white wall gallery spaces and sites such as sheds or residential settings to install his work.

A:What prompted you to want to focus on ideas of light so heavily in your work?
SH:I can’t recall a single moment or reason that prompted me to focus on light so heavily. I think it was more an amalgamation of exploring the development of colour theory and the impact that light has had on this as well as being exposed to the work of artists such as James Turrell and Olafur Eliasson.

A:How do you see the interplay between colour and light in your work? Why experiment with these two ideas specifically?
SH:I see colour and light as the same thing, which essentially they are. I’ve always had an interest in finding where our understanding of things has come from and there is nothing more constant in culture and society than colour. I then researched the history of the understanding of colour and colour theory, through the ideologies of Aristotle to Newton and Goethe to the advent of colour photography. This historical exploration obviously exposed to me the importance of light in what we perceive as colour and this became a focal point in my practice.

A:You say you use a “painterly process” in your practice of light installation. How do you make these two mediums, of painting and installation work together?
SH:I see the use of light as a medium as a form of painting. To put it quite simply, light is colour, colour is pigment and pigment is paint. When I refer to the painterly process, I primarily refer to the physical act of stretching the canvas over the light source. The relationship between light as a form of paint and the canvas as material is what ties the mediums together. The impact that the light, bled through the canvas, then has on the space surrounding it, becomes an installation itself.

A: De Coloribus claims to take influence from Aristotle and Newton. Please could you explain a little more about what specifically in the practice or ideologies of these figures finds its way into your work?
SH:This work is really a starting point for me in terms of the use of light and canvas. I would argue that any piece using the medium of light to represent colour takes influence from the ideologies of Aristotle and Newton in particular, if not many other theorists who have dealt with colour theory.With regards to Aristotle, our very understanding of colour today is formed around his early ideas, which inevitably lead on to Newton’s experiments and our understanding of the spectrum.The name De Coloribus itself relates to an early text on the subject of colour and our understanding of it, while it is not completely attributed to Aristotle, his influence is evident.

A:You have used spaces from sheds to residential settings to install your work. What do you look for in a potential installation space?
SH: I’ve always had an interest in architecture, so it seemed obvious to marry this with the use of light within my work. Both the shed and the residential installation were in quite confined spaces as well, which meant the light could strongly impact the space. The texture of the wallpaper in the house and the grain of the wood also leant itself to the impact of the light, creating shadowing effects and having a different relationship to the light than a white walled gallery space would. The residential installation also afforded me the time to experiment in terms of colour psychology and how people react to being exposed to certain colours over time.

A:What are you hoping to do in the future?
SH:I have a few projects and exhibitions planned for the start of 2014, mostly in the Oxford area. These include another residential based installation and collaborations with other artists, in particular painters, to really tie down the key concept to my work, that light is another form of paint

See Samuel Harriman’s artwork in the current issue of Aesthetica out now www.aestheticamagazine.com/shop 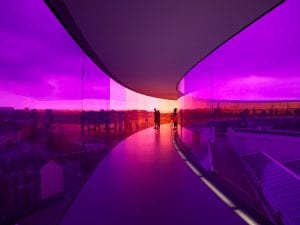 Art has the potential to make ideas tangible. Olafur Eliasson aims to turn abstract concepts into palpable structures, engaging with the public sphere.