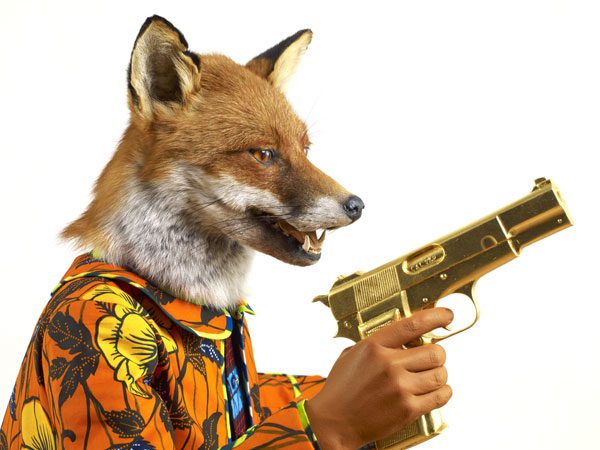 Wakefield was for many years the administrative centre of West Yorkshire. Owing to the city’s prominence in the Industrial Revolution as a centre for mining and the wool trade, it held this position. With a recent history of de-industrialisation, a visitor to the city and its environs might harbour negative expectations. Such expectations and assumptions, however, are thoroughly undermined by the way in which the area’s artistic history is showcased. Yorkshire Sculpture Park is one manifestation of this celebration. This undermining of expectation plants a preparatory seed in the visitor’s mind for the work of British-Nigerian artist, Yinka Shonibare. A very extensive exhibition featuring over 30 works made between 2002 and 2013 is now showing. Fabric-ation includes sculpture, film, photography and painting.

Despite encompassing such varied media, there is significant continuity throughout the exhibition. This is located in the ‘Fabric-’ employed. It is Dutch wax ‘African’ fabric. Highly florid, brightly coloured and patterned it holds significance for the artist. It is explained in a film with interview that the fabric was originally of Indonesian design and imported to West Africa in the nineteenth century. During the 1940s and 50s, the fabric became very popular amongst Africans and was used for clothing. People felt that it gave them distinction and identity separate from that of the foreign colonists at a time when Empires were crumbling and independences were gained.

While holding positive connotations for the artist, the fabric is used to great effect in undermining assumptions and expectations as a source of ‘otherness’. It is employed in this way in Spacewalk. The spacesuits of astronauts and a space vessel to which they are attached by apparent oxygen tubes are covered in the fabric. Close inspection reveals that the logo of the music group, The Delfonics, forms much of the pattern. The vessel is named ‘Martin Luther King’. Here, an icon is lent connotations that undermine expectation.

Similarly, the fabric is used with antique tailoring to cut the suit worn by Lord Nelson in Fake Death Pictures. In these painstakingly staged photographs, well-known paintings from Western art history featuring a death or suicide are undermined doubly. First, they are undermined with the use of Nelson in the lead role where, for example, St. Francis or Chatterton is expected. Second, the use of the fabric imports otherness and undermines the icon. Here, Shonibare encourages us to imagine different histories and undermines the historical construction of national identity.

In the same gallery, headless figures clothed in the fabric, cut with antique, military tailoring, are positioned about a very large cannon (Cannonball Heaven). One figure lights the fuse of the cannon. A pile of soft, toy-like spheres covered in the fabric and reminiscent of playthings, sit on the other side of the room as though having been fired. Again, this plays with and undermines our expectations about military capital and warfare with childish associations.

Shonibare’s use of headless figures robs them of racial identity and causes ambiguity of expectation. This inspires further reflection. This headless method is employed in the sculptures, Food Faerie (2010), Food Faerie (2011) and Girl on Globe (2011). In case of the first two, headless, child-size mannequins clothed in the fabric appear to fly with the aid of goosefeather wings. Each holds a leather-strap net bag full of wax fruit. Here, the artist responds to inconsistencies in food production and the issue of inequality of access to food with connotations of fragility and plenty. In the latter, the figure of the girl teeters perilously atop a globe on which is marked with varying intensities of coloration the severity of global warming in different locations. Much more can be seen of Shonibare’s work at YSP in what is a highly thought-provoking and challenging exhibition. 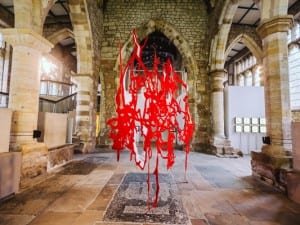 Elke Finkenauer featured in the Aesthetica Art Prize Exhibition with her selected piece Draw A Line Somewhere. This work is a reflection upon the many facets of human nature. No-one who achieves huge success does so alone. 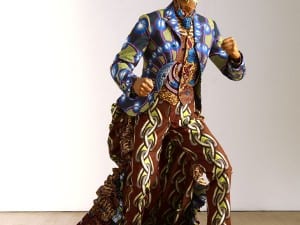 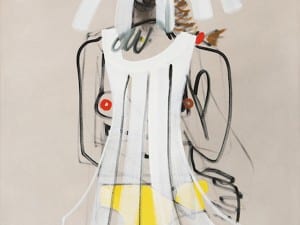