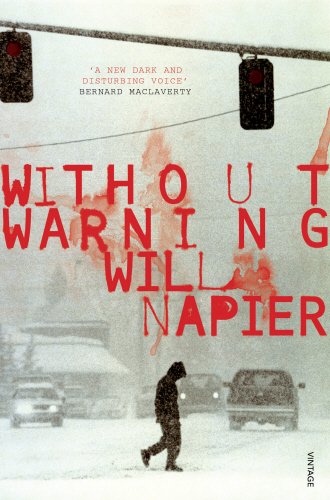 Napier’s second novel is a dark and terrifying thriller about the consequences of digging up mysterious secrets from the past. Joe Pullman has shed his childhood and moved to Henderson, Maryland, but hasn’t been able to dispose of the scars he gained under the hands of his father. Joe was put into care when his father was jailed for killing Joe’s childhood friend, and now he has to rebuild his life with his own wife and child. However, problems arrive when events from Joe’s past are dug up.

Without Warning manages to bring together the sinister themes of Joe’s past whilst still writing with an empathetic voice. Napier withholds the dignity of the protagonist throughout the novel, and the most touching relationship is that between Joe and his young son Marty. Marty is wise beyond his years and his take on the troubles affecting his family unit is an incredibly poignant thread through the narrative.

Disturbing, thrilling and addictive, Napier’s style is straightforward, yet accesses the innermost feelings of his characters.