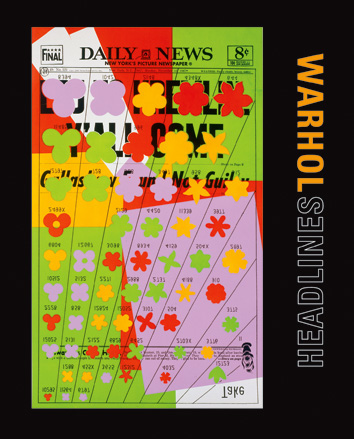 It has been over 20 years since his death, yet the legacy of Andy Warhol lives on. It is a known fact that Warhol was obsessed with contemporary culture, but the feeling was, and still remains, mutual. Warhol continues to influence our culture in a limitless way through a variety of media. Headlines has been published to coincide with a major exhibition at Washington’s National Gallery of Art that explores the works of art in which the artist used or referenced tabloids throughout his career.

This richly illustrated companion is divided into five illuminating essays, which tackle the wider theoretical contexts at play in Warhol’s headline works, which were realised in a range of formats – from two-dimensional to time-based media such as film, video and television.

Bringing together more than 80 works, and including a fascinating glimpse at Warhol’s private scrapbooks of clippings, as well as works he produced with Keith Haring and Jean-Michel Basquiat, Headlines lays bare the intersection of mainstream media and fine art that took place at this time.