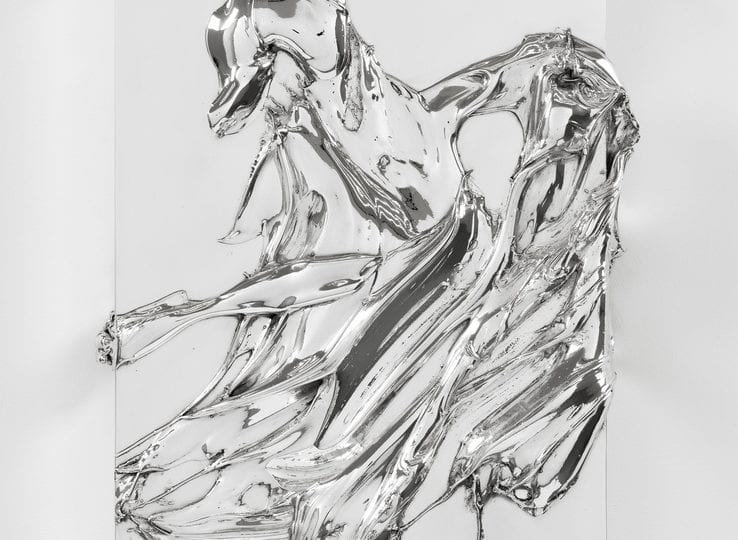 Copiously applied oil paint forms the thick, textural layers of Jason Martin’s new works at Lisson Gallery, London. The depth at which the material has been caked onto the aluminum panels and the tangibility of its surfaces transforms the works into sculpture. The deep layering, distinctly visible on the panels’ edges and within the tonal differentiation of the monochromatic colour palette, seems to reflect deeply personal studies over two decades.

Yet this is the first time Martin has returned to the medium after a three year hiatus. Pushing the pigment horizontally across the surface of the portrait-orientated panels, and creating an abstracted visual landscape with brush strokes, flattened areas above and underneath which have been smoothed by a trowel. The contours and ridges, trenches and valleys formed by this movement reveal a controlled rhythm within the repetition. Landscapes are not the intention here, however the way in which the globs of paint gather are similar to master works – appearing abstracted up close, and a beautifully rendered composition from a distance. In the first room of the exhibition, the five large-scale works on view are at once striking and subtle.

These heavily weighted works with their generous volume of the viscous oils exude a sense of calm and a minimalist nature. Attributing to this is the colour palettes of black, grey and white, matched with the titles of each work such as Titanium White, Payne’s Grey, Ivory Black which are simply the name of the shades used. Leading into the next room, three smaller works are displayed, one in a vibrant Vermilion – a colour Martin describes in the accompanying video piece as the only hue with an equivalent power to black and white.

The exhibition shifts from the sticky to the shiny, with six silver cast works in the following gallery room. The sporadically crafted contours articulate the artist’s gestural movements where polished metal has become the chosen material. The contrast between the literally reflexive surface and varied textures captured below, including the bead-like bubbles and dolloped mounds of modeller’s paste, suggest of a subterranean-esque effect. Metallic magma against the mirrored veneer lends to a theatrical ebb and flow while viewing one sculptural painting to the next.

As a whole, the collection is an evolution of explorations and expressions, taking mark-making  to mountainous three dimensional heights, inflicting monochromatic minimalism with traces of variation and vibrancy and capturing the chaos with a controlled creative hand. 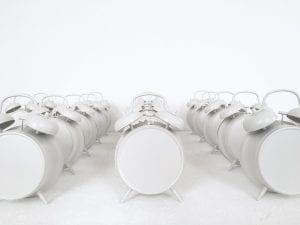 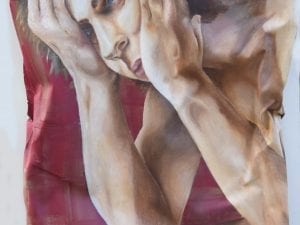 Cherish Marshall’s manipulated canvasses explore vulnerability, both in how it effects the sufferer and observer. The artist discusses human performance in society.