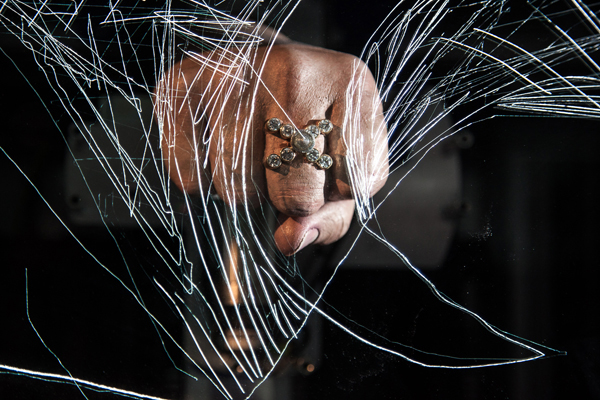 Following its unveiling at the Venice Art Biennale last year, Ron Arad’s Last Train project makes its way to London. Ron Arad (b.1951) opens his Camden studio to showcase the large-scale diamond engravings created by a range of artistic collaborations.

Illuminated by LEDs, the engravings demonstrate a unique mode of collaborating. The participating artist begins by sketching on an iPad; these marks are then interpreted in real time by the Last Train app and sent digitally to a disembodied mechanical fist created by Ron Arad. This fist bears a Diacore diamond ring and responds to the iPad sketches by scratching the design onto a pane of glass.

Drawing on a long tradition of glass etching, Arad was inspired by a window in a departing train from Naples. In this pane the scratching of a diamond ring had created mesmerising drawings, reminiscent of the images in matchflames created by Picasso. Elizabeth I also used to engrave love vows onto bottles using a “scribbling ring” and Robert Burns wrote poems on glass panels with a diamond-tipped pen.

Using this innovative technology, Arad has collaborated with artists across the world. In addition to the works unveiled at Venice, including pieces from David Shrigley, Tim Noble & Sue Webster and Ai WeiWei, the London exhibition showcases new collaborations with Grayson Perry, Anthony Gormley and Humphrey Ocean. The collaboration with Ai WeiWei took place during his house arrest in Beijing and it was only thanks to the nature of the creative apparatus that he was able to submit a drawing via the internet.

The pieces are created in real-time and the artists have to commit to the project as they are creating it. All works are for sale at the end of the exhibition and a satellite of Last Train can also be seen at the Royal Academy’s Summer Exhibition until 17 August, revealing the moment of the project’s inspiration. 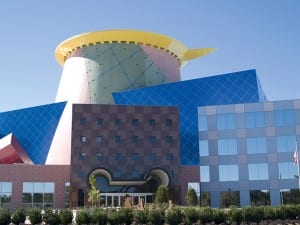 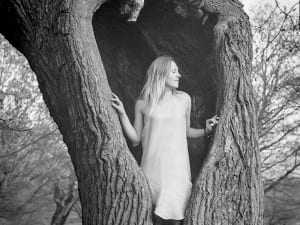 Tallulah Rendall is not a woman for half-measures. Having shed her six-piece band, the songstress stands feet astride, juggling acrobatic vocals, loop pedals and guitars in a tumult of folk fury. 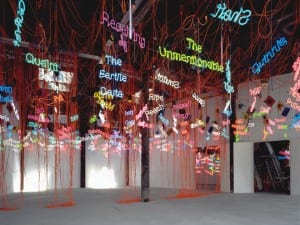