Unpicking the Social Language of Music: A Fire in the Master’s House is Set, Chapter, Cardiff. 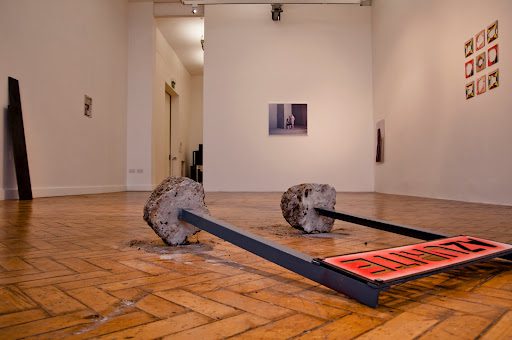 A Fire in the Master’s House is Set, named after a lyric that is repeated hypnotically throughout Rage Against the Machine’s 1999 song New Millennium Homes, feels simultaneously like a pet project for its curator Simon Morrissey, and a sensitive barometer for a particular type of approach to artmaking, based around the perennial themes of music and rebellion.

By way of unpacking the theme of the show, one might consider a revealing couple of passages around two-thirds of the way into Jonathan Franzen’s celebrated novel Freedom, in which the alternatingly hapless and shrewd father-of-two Walter Berglund visits a Bright Eyes show with his old friend, jaded rock star Richard Katz. Feeling old and washed up among a sea of hip young things, Katz metaphorically finds himself “the one stone-sober person in a room full of drunks”. Walter, meanwhile, is somewhere between these two polarities – in a taxi afterwards, Berglund, intoxicated by the experience, gushes forth an analysis that is contrarily temperate: “They’re all about belief…The new record’s this incredible kind of pantheistic effort to keep believing in something in a world full of death.” Berglund is routinely described by the author as observing life from an ‘abstract’ point of view – by which he means that Walter has a tendency to over-intellectualize the ecastatic. Franzen’s use of the term is partially – if forgivingly – accusative. When a likewise tendency comes to underpin Morrissey’s group show, it is done so in a manner which re-claims the term and puts it to productive ends – the press release proudly declares that in the show, “ideas of opposition, social defiance, protest, hedonism – so often the social language of music culture – are distanced or enfolded within abstracted forms.”

Thus, in Ruth Ewan’s Damnatio Memoriae (2011), Michael Dean’s Untitled (2011), and Elizabeth Price’s various monuments to formerly-great record labels (2008), formats, objects and images loaded with cultural association become barely intelligible nuggets of information processed through layers of memory and affective feedback. Dean’s prints are stuck to the wall with tape in the manner of band posters stuck to a teenager’s bedroom wall, but their enigmatic content ensures that they are sufficiently ‘abstracted’ from the source of this youthful exuberance. Price’s photographs enter at the more ‘intellectualised’ end of the music-appreciation spectrum by focusing on the cult of labels, and further distance themselves from the ecstatic associations of their source references through artful greyscale and nods to Rauschenberg and the Dadaists. Ewan veils the violent gesturing of her work – several cardboard record sleeves with great gouges torn out where the musicians’ smiling face should be – with an old obscurantist trick, the Latin title. Damantio Memoriae is an old Roman declaration that somebody should be dishonoured by being erased from memory, a reference to Paul Robeson, the artist behind the sleeves, who met the ire of the CIA and the FBI for his outspoken political views. This process is both most obvious and most poignant in Magnus Quaife’s wistful watercolours (taken from his series 1968 and other myths, 2008-11) of strikes, rock gigs and other rebellious activities, which speak calmly of the distance between direct engagement with the endless tumult that is politicised youth culture and the sort of engagement usually reserved for artists.

What Morrissey is labouring to communicate in this show – and one should commend him for refusing to do so in the manner of banal, condescending ‘essay shows’ – is the extent to which the contradictory ethos evinced by Quaife’s paintings can, and should be seen as a positive position for the artist in an age where all information has an imperative to be immediately consumable. As such, Morrissey has curated a show that itself bears certain anomalies. A good number of the works featured here, from Henry Krokatsis’s cut mirrors (Untitled, 2010) to Sarah Dobai’s sumptuous photographs of impassive youngsters in sleekly artificial surroundings (Emily & Emmanuel, 2009; Bella and Esmee, 2011) to Mike Ricketts’s sculptures which display the names of crystals in the manner of toppled road signs (Azurite, 2011; Amethyst, 2008), appear so obtusely related to the stated theme of the show as to be mere outliers. Furthermore, far from the ‘abstract’ tendency of numerous other works included, the works supplied by Melanie Counsell and Mark Dean actually verge on the mood-altering – the melancholy violet light from Counsell’s billboard-sized colour field at the main entrance to the building floods the café space, and Dean’s Christian Disco (Terminator) (2010) is a slow-burning and mildly terrifying experiment in psychedelic film-making.

Indeed, these confounding pieces form such a substantial body of work within A Fire in the Master’s House is Set as to offer a sort of dissent to the curator’s declared intentions. In this regard, Morrissey is highly successful – the very curation of the show reflects the vein of ambiguity and ambivalence that runs throughout its component works, but if one steps back from weighty thematic issues for a moment, it’s also a triumph of aesthetic rigor: somehow, these disparate works pull together in an intoxicating sort of way. The curator is vindicated in conceiving of the eclectic components of the show as coming together in “a kind of spell”, not only in including several works by Adam Chodzko, from whom this notion is cribbed, but in putting together a collection of works that offers more than the sum of its admittedly impressive parts.

A Fire in the Master’s House is Set continues until 4 September.

Aesthetica Magazine
We hope you enjoy reading the Aesthetica Blog, if you want to explore more of the best in contemporary arts and culture you should read us in print too. You can buy Aesthetica today by calling +44(0)1904 479 168. Even better, subscribe and save 20%. Go on, enjoy!

The inaugural edition of Photofairs San Francisco launches this January, expanding upon the photography showcased in the Shanghai fair. 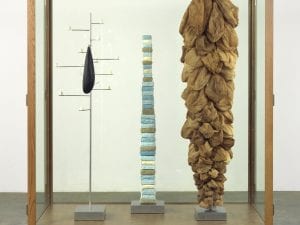 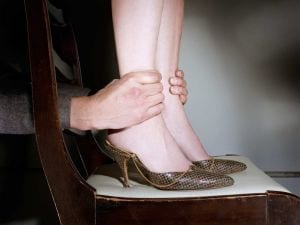