Things Which Come Together; Then Fall Apart, Martin Boyce Wins The Turner Prize 2011 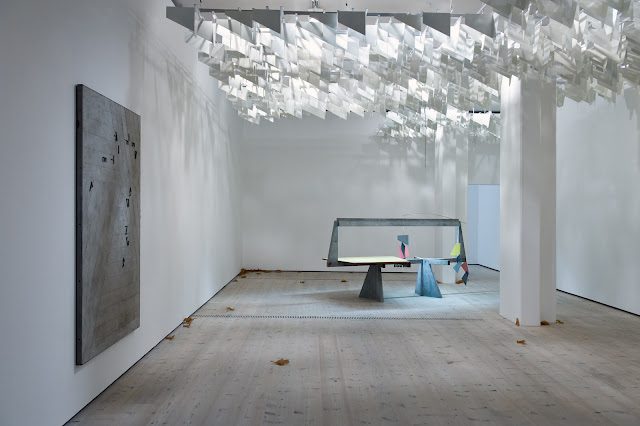 When Mario Testino announced Glasgow-based Martin Boyce as the winner of this year’s Turner Prize at the Baltic last Monday night, he accepted the award with modesty to the point of bashfulness: “Uh, well,” he said, “I didn’t expect that”, before going on to dedicate his prize to the importance of teachers and education. His reaction reflects a quiet generosity (as well as a sense of modest unexpected surprise) that is ever present in his art practice, which Tate-director Nicholas Serota has praised for the way it explores “things which come together and then fall apart”.

Boyce won the prize for an installation that was originally exhibited this year at the Galerie Eva Presenhuber, Zurich, and which built on the work that he showed at the Scottish pavilion at the Venice Biennale in 2009. Do Words Have Voices (2011), the sculptural installation at the centre of the room, is a hauntingly thoughtful piece that evokes an urban, autumnal and distinctly Modernist atmosphere. A ceiling-based sculpture of angular white aluminium fans suggesting a shady canopy that, combined with the concrete structural pillars in the space, creates a sense of a concrete tree looming and sheltering above. The room is remarkably peaceful and quiet, the light refracted to a dapple by the aluminium leaves above. Boyce’s sculpture references a design for a Modernist garden from 1925, including four cubist concrete trees, by the French sculptors and designers Jan and Joël Martel, made for the Exposition des Arts Décoratifs et Industriels Modernes in Paris . On the floor, scattered around the room, are delicate papery geometric forms the colour of toast, like autumn leaves.

The different sculptural elements in Boyce’s installation exist in curious counterpoint and balance to one another. The attention is drawn as much to the atmosphere created, the spaces between the works and the conversation between different elements as the individual pieces themselves. You find yourself threading carefully past his paper leaves for anxiety they could sweep up in your wake. Perforated and Porous (Northern Leaves) (2011) is a red metal sculpture, slanted like a parallelogram with a lattice pattern. Inside the sculpture is a grey soiled rag of a jumper, as if a ‘hollowman’ has got his head stuck at the base. This piece has prompted the usual criticism from Turner-phobes, who have christened it the ‘wonky bin’, but it is in fact a decidedly subtle and evocative work. It manages to appear both mangled, like something you’d just stumble across in an abandoned play- park, and fresh-off-a-Modernist-designer’s-pen, like something from Charles and Ray Eames, or Danish master furniture-designer and architect Arne Jacobsen. The forms in the lattice of the bin also evoke the angular lexical shapes in the Martel twins’ concrete trees, a motif that is also picked up in one of the most easy-to-overlook aspects of Boyce’s subtle installation, the grilles he’s designed for the air vents in his gallery of the Baltic’s third floor. Elegant and simple, these geometric white panels wouldn’t look out of place in the lounge of an art-deco hotel or ocean liner, but they also have the strange edgy geometric quality generated from Boyce’s recasting of the Martels’ trees.

Boyce has been creating work from these concrete trees since he first encountered a photograph of them in Berlin in 2005, where he shared a studio with Simon Starling, another Glasgow School of Art graduate to have won the Turner prize. On seeing the photograph in a book, Boyce began making series of patterned drawings based on their shapes. Gradually, these drawings developed into lexical forms and he began developing typographic pieces using the slanty geometric lettering devised from the drawings. A piece called No Brilliantly Coloured Birds created for his No Reflections show at Venice 2009 features the phrase from the title text on a wooden bird box. The letters have the appearance of tumbling to the ground, some upside down, some on their sides etc, and they require considerable effort in deciphering what’s a “t” and what’s a “y”. In the Turner Prize exhibition, this typographical work has developed into a large concrete wall panel created from the process of ‘shuttered concrete’, i.e. concrete that is set in a frame of wood so that it retains the grain when the frame is removed. It gives the pane the disquieting appearance of wall-mounted concrete floor-boards. The same Martel-inspired tumbling script spells out “petrified songs”, possibly in reference to the birds from the earlier piece.

One of the most compelling aspects of his Turner Prize exhibition is the way the environment Boyce has created feels both “inside” and “outside” at once. Both like a landscape and an interior scene. Boyce has long shown an interest in architectural space, particularly with reference to twentieth century Modernist architecture and design. His 2002 exhibition For 1959 Capital Avenue in the foyer of the Museum für Moderne Kunst, Frankfurt, constructed an interior space of a fictional address in the USA, drawing on and subtly altering designs by architect R.M. Schindler and Mies Van Der Rohe. The date in the house number connects Boyce’s project to the way that the cultural significance of these pieces of furniture alters over time; what once were relatively affordable and readily available become treasures of private collectors, as suggested by the exhibition’s loaded street-name. Constructed as it was in a foyer, (which itself seems a critique on the capital attributed to modern art, its transition from the up-market apartment-block foyer to the museum floor) the exhibition seemed on the cusp of being outside and inside, an effect compounded by the utopian quotation from Mies van der Rohe that Boyce had printed around the walls of the space: “punching through the clouds”.

Boyce’s work manages to capture some of this utopian vision and filter it (through an intricate critique) into a peaceful and compelling architectural environment, the spaces between the sculptural objects in his installation seeming as if they’re pulling away from each other in perfect tension. Ilfracombe-based painter George Shaw may have been the popular choice for this year’s Turner Prize with his highly detailed enamel landscapes of the Coventry estate where he grew up, but to my mind, Boyce’s exploration of our engagement with architectural space is far subtler, and more magical. 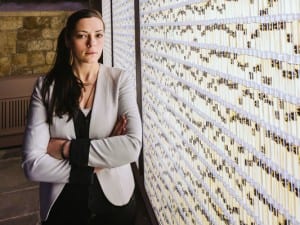 Votes have been counted for the Aesthetica Art Prize People’s Choice Award, and we are delighted to announce that Sybille Neumeyer is the winner. Her work refers to the endangerment of bees. 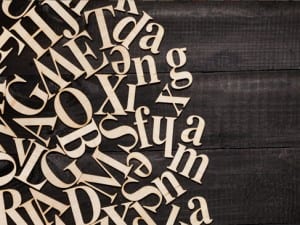 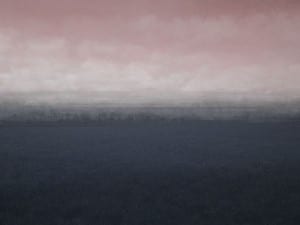 Sylvia Adams is author of a novel, a poetry collection, an award-winning chapbook and a children’s book. As a book reviewer and poetry columnist, her contributions to the literary world have been great.