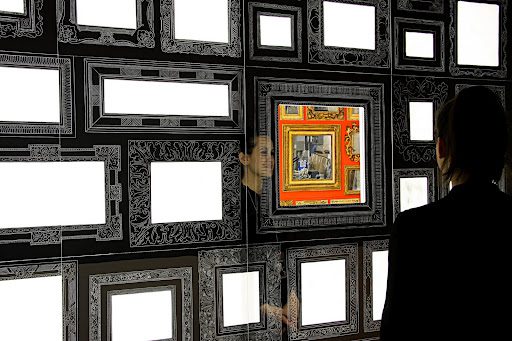 Magical Consciousness examines and negotiates philosopher Vilém Flusser’s postulation that the act of looking carries more intrinsic potential than the object being looked at. The exhibition, co-curated by artist Runa Islam, brings together an eclectic mix of media, gathering and juxtaposing works that take the act of looking as a starting point from which to explore the ramifications of Flusser’s philosophy.

On the ground floor gallery, two works investigating the relative significance of context in the process of engaging with an object are showcased side by side. The MacGuffin Library and Killed set off from opposite ends: the former extricating objects from a context in which they held positions of prevailing and absolute importance and presenting them as an unimpressive miscellany of defeated, lacklustre exhibits; the latter demonstrating the overwhelming obliteration of context by what is essentially an undeniable absence in its centre.

The MacGuffin Library comprises a number of MacGuffin objects – the MacGuffin, extensively utilised by filmmaker Alfred Hitchcock, is an element in a film plot, often a prop, the attaining of which becomes of such importance to the protagonist as to drive his or her actions to an extent that does not necessarily correspond with the relative ‘value’ of the object itself. Despite the fact that The MacGuffin Library includes a synopsis of the story behind each object, outside their context the objects become as intriguing and inherently unknowable as museum exhibits; their fascination no longer derives from the role they sometime played in the original story they featured in, but rather inheres in the potential re-imagining of said story (or even the altogether different framework reinvented and ascribed to them) by the viewer, in the infinite possibilities of their reincarnation.

Killed displays a looping representation of a series of photographs in which a hole has been punched in the process of editorial censorship. The hole remains in the same place – the centre – of each photograph, but its size is amplified in sudden jolts: slowly at first, then with what appears as ever-increasing malevolence, the hole expands until it takes over almost the entire surface of the screen. Only the corners of the pictures remain in view, and as the film speeds up any likelihood of gleaning the subject of the pictures diminishes into impossibility. The viewer’s attention is forcedly drawn to the resounding absence that defies and frustrates any attempt at discovering meaning in the images presented.

On the second floor galleries, three conceptual works explore the medium of cinema and how it operates after the –seemingly – most important element, the visual, is removed. Recalling Frames, Vera Cruz, and Invisible Film demonstrate, to varying degrees, the potency of sound and words as the predominant means of communication. In Recalling Frames, the image of film grain is projected to the soundtrack of garbled, largely indistinct dialogue – the latter almost drowned out by the accompanying music and rendered all the more threatening for this reason; in Vera Cruz, speech and any other sound are engulfed by the constant sound of sea-waves, and the absence of image is accentuated by the presence of the subtitles at the bottom of the screen; in Invisible Film, an overhead projector projects the image of an old-style projector projecting outside the viewer’s frame of reference. On the outside of the gallery is mounted a screen, on which subtitles are showing (this time on the centre of the screen), accompanied by the shocking and loud soundtrack of screaming, gunshots and swearing.

The absence of the visual intensifies the viewer’s experience of the auditory and verbal, heightening the received information to exaggerated, threatening, almost monstrous proportions. At the same time, the viewer’s position as a subject, looking, peering into nothing is brought to the fore. By questioning the hierarchy that places the visual element at its highest level, the three works explore, to differing degrees, the notion that meaning is no longer elucidated or created through the process of interpretation, but rather in the process of seeing, in the dynamic space taken up by the experience of looking as opposed to the passive experience of taking in and deciphering. All three works demonstrate a preoccupation with current over-reliance (and near fixation) on the visual aspect of art and urge for a re-evaluation of its perceived necessity while denouncing its subjugation of other sensory pathways of communication.

Almeida’s work Inhabited Painting challenges the fleeting involvement of the female body in the creation of art, especially as typified in Yves Klein’s Anthropometries series. Klein’s use of nude female models covered in International Klein Blue as ‘living brushes’ is alluded to only to be refuted in Almeida’s work: the seven panels present a series of black and white pictures of the artist appearing to obliterate her own presence in the frame behind sweeping brushstrokes of blue paint. From the fifth panel onwards however, the artist is shown reasserting her presence, when first her hand, then her arm resurface from behind the blue, eventually pushing it aside. The abstract shapes of the female figure in Klein’s work are replaced by the playful but confident affirmation, in Almeida’s work, of the (female) artist’s centrality as a defining component of the pictorial space, both as the subject creating and as a subject portrayed. The female body reasserts itself as the wielding power controlling the brush, the creator rather than the tool implemented to create.

Alongside the artworks (of which The Collection of Impossible Subjects, Enigmatic Whistler and Klein Bottle Piñata are especially noteworthy), the exhibition showcases an Obsidian Mirror, an Aztec artefact on loan from the British Museum.

Magical Consciousness is on show until 3 July. 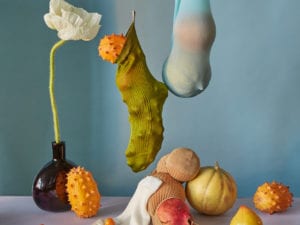 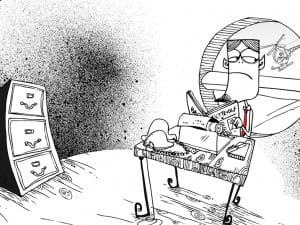 In this two-part guide, Myles McLeod of the award winning Brothers McLeod, offers a series of practical hints and tips to help you start animating.