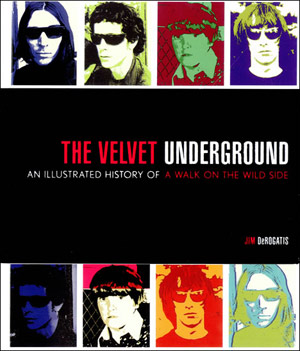 With a velvet cover sleeve and Warhol’s Pop as the background cover, this illustrated history from the get-go is pretty exciting. It’s no secret that The Velvet Underground, Lou Reed, Nico and Andy Warhol set the stage for a moment in cultural history that has outlived the decades.

Incorporating music, art and philosophy, The Velvet Underground embodied a time and place. New York City was the place to be. As stated in the foreword, Lenny Kaye of the New Times said: “If you want to write the story of the Velvet Underground, you have to begin far beyond any of the physical things that happened, You first have to look at New York City, the mother which spawned them, creating an umbilical attachment of emotion.”

With just over 190 pages of photographs, commentary and artwork, offering a complete narrative, this book is the definitive guide to the rise and the subsequent legendary status of The Velvet Underground. The Velvet Underground is more than a collection for a muso, but also a must-have for the art-lover too.