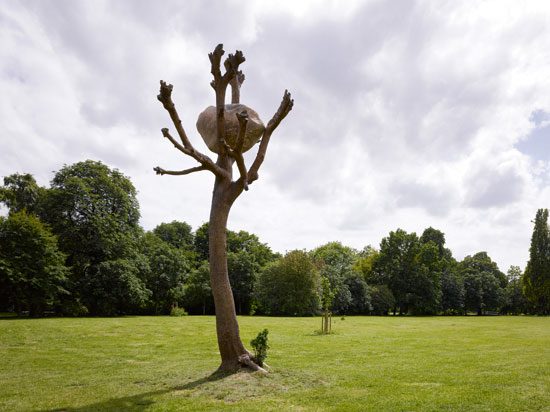 A grand high-ceiling room, empty except for one vitrine, a light breeze wafting through, courtesy of Ryan Gander (I Need Some Meaning I Can Memorise (The Invisible Pull), 2012). Inside, a letter to Carolyn Christov-Bakargiev, the artistic director of dOCUMENTA (13) scrawled across five pages of A4 in a scratchy script, pleasing to the eye but difficult to read. The opening of the letter reads: “Dear Carolyn, I do write to you in remorse, because I feel you may think I betrayed your trust and confidence in me…” The letter was written by Kai Althoff, an artist billed to participate in the event. Later in the message she pleads to be pulled from the show, citing “[her] great doubt of how to continue with [herself].” The letter’s inclusion then, an act of curation on the part of Christov-Bakargiev, seems to find a middle-ground, compliant in requiring no more of Althoff, but nonetheless a definite contribution by the artist. The text of the letter is an emotional outburst, a voicing of an artist too lost in the protocol of exhibiting to have anything real to show. The room seems suddenly mournful, but perhaps this atmosphere is provided by another work.

Drifting from six speakers in a small, adjacent room is Ceal Floyer’s audio installation ‘Til I Get it Right (2005). The music plays a simple, though beguiling, eight bars (6 seconds) on constant loop, the lyrics, “So I’ll just keep on/’til I get it right”. Sampled from Tammy Wynette’s song of the same title, Floyer has removed the lyrics, “falling in love” from between the phrases. The edit is seamless, and leaves the words universal in their vagueness, yet in its haunting repetition the melancholic impact on the audience is tangible. The two works overlap, contributing to one another in their immediacy and simplicity.

The theme of dOCUMENTA (13) posited by Christov-Bakargiev, speaks of the historical premise of the dOCUMENTA event within the context of a particularly contemporary idea of art, one that acts in the present. The modes of acting are summarised by four categories: on stage, under siege, in a state of hope, and on retreat. We have already met some of these states; Ceal Floyer’s state of perpetual, repetitious hope, acting to make Kai Althoff’s besieged retreat seem all the more dispiriting.

With works placed in museums, cinemas, and unused spaces across Kassel, site-specificity plays a significant part in much of the exhibited work. Susan Hiller’s jukebox (Die Gedanken sind frei: 100 songs for the 100 days of dOCUMENTA (13), 2011-2012) plays songs from her historical songbook in several cafés across the city, David Links’ Loveletters-1.0 software finds itself amidst an array of scientific equipment, and Allora & Calzadilla’s exploration of a flute carved 35,000 years ago, ominously watched over by a Griffin Vulture, seems at home in the cool, dark bunkers below Kassel’s vineyard (Raptor’s Rapture, 2012). Jeronimo Voss’s piece, Eternity through the Stars (2012), takes place in Kassel’s planetarium. Via the format of a traditional planetarium presentation, Voss diverts the subject from life in the potentially infinite universe (the revolution of the stars) to the Paris revolution.

At the far end of a platform at Kassel’s train station is Susan Philipsz Sound Test (2011). The composition, based on Pavel Haas’s Study for Strings (1943), refuses to rest. Drawn out string chords, metallic with the sound of rusted tannoy speakers, play directionally from surrounding locations. The station platforms mark a place of Jewish deportation, and Haas’s composition has its own history. Haas died in Auschwitz in 1944, whilst his composition was used in Nazi propaganda. In its tin can string orchestra tones, the piece is immediately historically resonant; evocatively pronouncing the space’s indelible, dystopian past.

A pairing of works has been set up in the dilapidated spaces of Huguenot House. The main house space is clearly under construction. Some rooms, most notably the (cordoned off) bedrooms seem complete, if sparse. The furniture made from scrap wood. Others areas remain in decay, the bathtubs covered in brown dust, walls unpainted, and spaces unused. Upstairs the kitchen is in use, a group of people having lively conversation over lunch. Other rooms are used for musical installations; flutes, saxophones, cellos, and elegiac a capella vocals drift through the house’s rooms and corridors. The work is Theaster Gates’. The house, once a hotel, has been unused since the 70s and finds itself as part of his renovation project; a material redevelopment involving a workforce from Chicago and Kassel, but also a space for discussion and performance.

At the back of the house is another room, pitch-black. Singing, a sort of ad-lib beat-boxing strays luring visitors through the doorway. Eyes adjust, the people making the noise are spread across the room, some seated against the wall, some standing, moving with the music. A woman approaches, dancing a crotch-grabbing, thigh-shaking dance, keeping eye contact. In the dark there’s no guilt. The singing culminates and a debate ensues, the topic: the value of monetary wealth over people. They begin to sing Timbaland’s “The way I are.” The two Huguenot House pieces seem only contemporarily extant.

A gentle, steady thrum is in the air, amidst the children’s clothes at the top floor of a department store. Following the noise leads to a white-walled corridor, which opens into an industrial, high-ceilinged space. The bass, echoes around the concrete. “ReReReReReReReReReduziert” Reads a sign on the wall. Broadcasting a remixed discount. Alongside the consuming, thumping bass, the centre of the rhythm, there is tapping and clicking, tinny and piercing, emanating from speakers placed around the room, fading in and out from behind white curtains, windows, and walls, forming spatial polyrhythms. This is Cevdet Erek’s Room of Rhythms (2010-2012). Like Sehgal’s piece, there clearly are bodies in the room making this noise, unlike Sehgal, these bodies are clearly in the past.

Abram Zataari’s 16mm film, The End of Time (2012) hidden in a small rough and ready upstairs storage room, above Walid Raad’s more polished exhibition, provides compellingly understated contrast. A simple sequence of set pieces between three men repeats three times. The framing is simple, the film footage monochrome and washed out, inconspicuous, and no sound is heard besides the whirring of the projector. Two of the men approach each other as if to kiss, heads and hips cradled in each other’s hands. They stop just as their mouths would touch, and pause. In its third repetition, the progression of semi-erotic, unfulfilled gestures are preceded and framed by the phrase “and now, we fall in love”. A series of loves, each the same.

So what is it that makes an artwork present? Tino Sehgal’s work embodies the theme emphatically. Very much on stage, it is being created constantly and barely occurs without a time, a place, and a viewer. Its curated partner piece by Theaster Gates is equally present in the sense of a project ongoing throughout the 100-day dOCUMENTA period, gradually creating an absolute and complex change. But we forget that the historical too can be present. Philipsz’ piece at Kassel station acknowledges the past in such a way as to make it present, taking a unique opportunity to snatch at a specific past. Presence is established in such a sense as to mean present in time, durational throughout Kassel, and present in space, installed and specific, or historical and referential. The most profound presence however, is found elsewhere.

Wandering the impressive landscaped park in Kassel the topography falls away. The path, now enclosed, wends through an apparent overgrowth of wildflowers and disuse. Building supplies are stacked, orderly amongst craters and dirt mounds, signifying something unfinished, left abandoned. The place is very much alive, much more so than the pristine park, and insects and wildlife abound. Following the buzzing leads to a stone statue, a reclining woman, head covered by a frenzied hive of bees. Behind her, in the distance, a man sits sketching. Two dogs play near him, one has a front leg dyed fluorescent pink. As Huyghe points out, there are “movements and processes but no choreography”, “rules but not a policy.” Very much living and present, but not at all enacted. 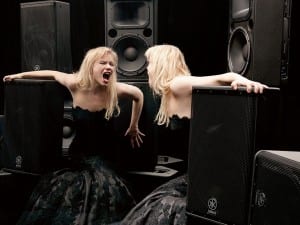 Sound From Every Angle

To hear a 3D recording for the first time is an eerie moment. The sensation of something making a noise from behind your left ear, or over to the right, or in the distance at your two o’clock position, is at first unnerving, and then amazing.