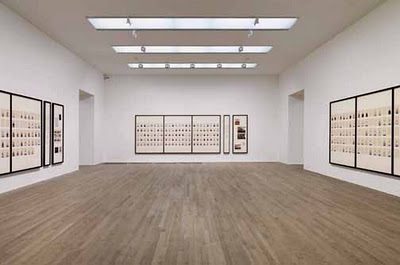 It is no surprise that Tate Modern has extended the run of American artist Taryn Simon’s exhibition A Living Man Declared Dead and Other Chapters until January 2012. This gives us time, and time is one’s ally when engaging with this exhibition where one can happily spend an afternoon probing Simon‘s intriguing investigation into genealogy and its repercussions. The exhibition consists of 18 ‘chapters’ that each documents a bloodline in an ordered, structured form. The chapters consist of 3 framed sections: portraits of family members – like a linear family tree, a supporting annotation, and a series of photographic evidence. The overarching connection between each chapter is the provocative nature of the story they each tell, a story that Simon exploits in the most delicate of ways.

In the first room we are confronted by a land dispute in India which sits across from the story of engineer Choe Janggeun, a south Korean abducted in 1977 by North Koreans when on a shipping mission to regulate illegal fishing. Janggeun was never found, and thus a blank space sits where his photograph should have been, his family members are then systematically photographed. Simon uses blank spaces to present those who, for whatever reason, could not or would not be photographed. Between these two chapters sits Latif Yahia, the Iraqi citizen who was forced to become the body double of Uday Hussein, the infamously psychopathic son of Saddam Hussein. In the third frame the photographic evidence sits – a gold-plated Iraqi AK-47 and a sniper rifle, both were seized by the Americans when storming Uday’s palace. There is also a somewhat comical sequence of Latif impersonating Uday, along with medals that Latif received for his services and a letter from Uday. In the following room sit 32 rabbits in sequence documenting the introduction of rabbits to Australia in 1859 and the subsequent introduction of RHDV, the lethal disease to control the ever increasing rabbit population. This is married with a witch Doctor; the descendants of Hitler’s legal advisor and the bloodline of Leila Khaled, a member of the Popular Front for the Liberation of Palestine who, at the age of 21, became the first female aircraft hijacker. Another room documents a Ukrainian orphanage, images of the children’s rooms are presented, along with 120 orphaned children’s portraits. The annotation states that children have to leave at 16, and in most cases further education is not provided and the children disappear into Ukraine’s seedy underbelly of human trafficking, prostitution and pornography. In the last room sits a Brazilian blood feud between two families, the Ferrazs and the Noraes, both families’ bloodlines are documented through the portraits and hung powerfully side by side. Opposite sits the tragic outcome of Dorothy Gallagher’s ingestion of thalidomide during pregnancy.

These are challenging and highly engaging testaments, where the body of work jumps in time and place to bridge and illustrate the universal nature of power, religion, conflict and oppression. Through displaying the stories side by side, one is not only reminded of the universalities and complexities of situations, but also that these stories (sadly) are not unique, and were seemingly selected arbitrarily so to illustrate this unfortunate fact. Countless other stories could have stood in their place and would be just as compelling in their controversy. A simple reminder that oppression exists as a universal part of the fabric of society, be it in the guise of a disastrous pharmaceutical drug, or an Iraqi dictator.

Simon has never taken the easy route, a self-confessed seeker of obstacles, she clearly thrives on challenge, and her work is a reflection of that need. This is not only expressed in the nature of what Simon documents, but also in the way it is produced. Four years in the making, An American Index of the Hidden and Unfamiliar (2007), is a book containing photographs of the most top-secret, hush-hush places in the world, while Contraband (2009) contains1,075 photographs of items confiscated by US customs at JFK international airport. For this, Simon sacrificed her sanity, sleep and cleanliness to live in the airport for 5 days, resulting in an obscure but endlessly intriguing book that confronts us with the realities of contemporary America. Living Man Declared Dead and Other Chapters, her most ambitious, challenging and laborious project to date, is no exception. The work was created over a four-year period (2008-11) when Simon investigated, documented and produced each thread of the work. The project required her to travel the world and ruthlessly investigate each bloodline, and then with all the raw material it became Simon’s responsibility to pare down that research to form a tight and presentable story for a gallery wall. This interest in obstacle, labour and commitment not only produced the work, but it is very much present for the audience viewing it as well.

To put it bluntly, this is an exhibition that requires time, energy and patience, not only for the content but also each chapter does require the viewer to read and consider thoroughly the relationship between the words and the images. Both elements, the photograph and the paragraph, are as important as each other and support the other in providing a rich tapestry of content. As the eye flits between the visual and the textual, it is apparent how neatly Simon ties the two together and it is this carefully sewn combination that makes Simon’s work so strong. If we were in a quiet gallery, this detailed and full exhibition would sit peacefully and contemplatively on Tate’s cream walls, allowing us freedom from obstacles to float between the walls and the chapters at our own pace. However, this is an unrealistic luxury and in the busy galleries of the 4th floor where the crowds gather round the small frames of information, views are obscured, patience is tested, and questions of ‘just skipping this one out’ (there are 18 chapters after all) are raised. Was this obstacle apparent to Simon? Previous works by Simon (as mentioned above) were books, a medium that offers an isolated experience in which to engage. While the work has been published as a book, and the exhibition itself, in some respects, is like walking through one – each wall a new page – one cannot help but ask the question, would this have been more considered as just a book? However, I tend to run from this thought as the success of this exhibition is, in part, because it bundles together a diversity of situations, people, images; they have been brought together, opposite and across from each other, not to be separate as in a book, and so the chapters remain a neatly integrated and connected series.

What I find most interesting in this body of work, which would not have been so apparent in a book, is the relationship between anxiety and calm. Clearly, the issues Simon is raising could be detrimental to our emotional states, but they are presented in such a calm, ordered, understated way that one can set aside the emotional impact and reflect in a productive, factual manner on the issues and comparisons raised. She has chosen to present the work like a cold scientific survey or index in which to present facts and figures through investigation. Simon is clearly not interested in bombarding us with the horrors of conflict, choosing words over images to describe violence, while the images remain tools to document people and objects in a sterile, studio form. The sitters are not placed in their zones of conflict, all 817 from across the 18 chapters are treated with the same timeless backdrop of studio white. This body of work, with its calm scientific aesthetic, both in its medium and display, removes the emotional attachment and anxiety, granting us space to make connections between the chapters and to think productively about the nature of the work. Simon wants to command our attention, but is not interested in doing so through emotional manipulation.

Like the work itself, boundaries are something that Simon, as an artist, is clearly interested in crossing. She is both deeply invested in contemporary art practice but also the need to dissect the current world; and the new body of work on Tate’s walls illustrates Simon’s uncanny ability to be both an artist and an investigative photojournalist when bringing the political into the gallery. She accomplishes this in the least burdensome way, not only are her works simple to comprehend but also rich enough to house all the information you need to understand the gravity of each chapter – never assuming the viewer’s prior knowledge. Simon’s work is able to grab our attention, but quietly enough to offer us space to be obsessed with it, with the unravelling and reading of the ordered genealogical sequences, their consequences, the stories they tell, and the history they document and preserve.

A Living Man Declared Dead and Other Chapters is at Tate Modern, London, to 2 January 2012. The exhibition will show at the Museum of Modern Art in the Spring of 2012.