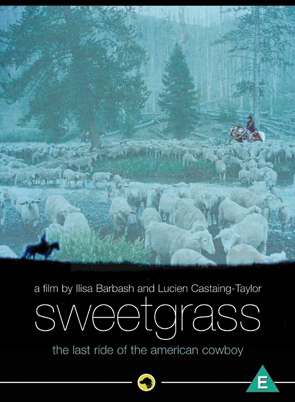 This film offers many surprises; being a non-narrative documentary does, at times, leave viewers lost in the scenery. Sweetgrass tells the story of sheep farmers in Montana. Don’t laugh, because there is something compelling about this film. Life is hard, and thinking about the retail of wool, you can see why the daily grind is so labour-intensive.

There isn’t any dialogue until nearly 18 minutes into the film, creating an unsettling effect; you start to wonder if this film is only visual. However, once the “characters” are introduced, and the story starts to unfold, the film becomes much more enjoyable.

Two ranch hands are charged with bringing 5000+ sheep into the mountains of Montana to graze for three months on public land. The work is hard; they don’t get much sleep and have to contend with bears. As the ranch hands start to speak, you hear the desperation in their voices, and the struggle within; all the while this is juxtaposed with some of the world’s most beautiful scenery.

This film beautifully illustrates a lifestyle that has faded, and in many ways that is sad.