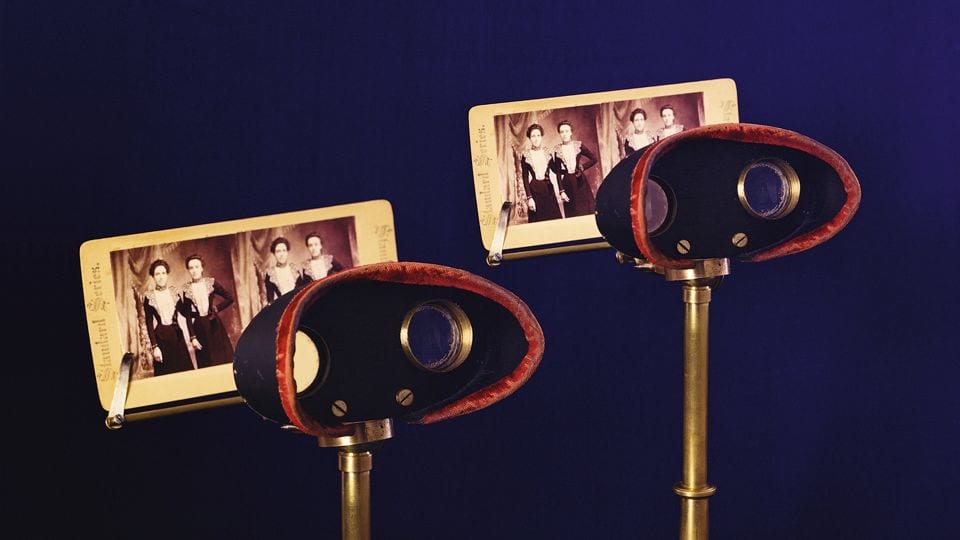 In an interview in 1990, the artist Sarah Charlesworth (1947- 2013) stated that she didn’t consider herself a photographer and that her engagement with photography was as “a problem rather than a medium.” The remark reflects a characteristic self-consciousness and antipathy towards the mechanisms through which she made almost all of her artistic output. Interrogating her own medium with intensive concentration, from her first major series in the 1970s through to her last in 2012, Charlesworth, perhaps more than any of her contemporaries, explored the implications of a culture in which photography is such a prevalent part of individual experience. In the first career-spanning survey since her early death, New Museum’s Sarah Charlesworth: Doubleworld examines a question that becomes ever more relevant: what does it mean when everything we perceive is conditioned by manipulated photographic imagery?

Charlesworth’s work has usually been considered as part of the Pictures Generation, a term used to describe a number of artists, mainly active in New York, who in one way or another focused on the theme of representation. Alongside artists such as Cindy Sherman, Barbara Kruger and Richard Prince, Charlesworth’s work can be seen to be part of a wider movement in art practice which aimed to interrogate the implications of mass media culture. As curator Margot Norton comments: “Charlesworth’s work is part of the growing consciousness in the 1980s that images are so pervasive and they play a role in establishing individual attitudes towards desire or towards sexuality and identity. Her work is concerned with the visual language of mass media.”

Charlesworth also had strong ties with early conceptual artists, and their methods and concerns informed much of her work. She studied with the first generation conceptual artist Douglas Huebler and went on to co-found The Fox with Joseph Kosuth and other artists, mostly associated with the Art and Language movement. The Fox was an influential, if short-lived, platform for art writing and art theory that collapsed mainly due to infighting and animosity. Nevertheless, it is generally regarded as one of the key publications of the era and Charlesworth’s activities in editing and publishing didn’t stop there. She later became one of the founders of BOMB Magazine, still a vital forum for contemporary culture.

In spite of these activities, Charlesworth’s relationship with media fundamentally takes the form of critique. As Norton remarks, the series Modern History, which began in the late 1970s, saw Charlesworth “pioneering photographic appropriation.” For these works, she developed a systematic way of photographing the front pages of newspapers. By placing white paper over the newsprint prior to photographing them, she was able to erase everything except for the masthead and images. Through this, Charlesworth noticed a number of patterns in newspaper images and their placement. As Norton comments, she found that “women were almost completely absent from the front page.”

This process was developed further into an analytical and conceptual project based on the kidnapping of Italian Christian Democrat Prime Minister Aldo Moro by the paramilitary organisation the Brigate Rosse. Charlesworth turned her attention not to the act itself but the way it was reported in Western media across 54 publications. One picture in particular, used in newspapers around the world, shows Moro holding the previous day’s newspaper in order to demonstrate he was still alive. An irresistible photo for picture editors, the photograph seems to effectively characterise the prismatic nature of our media obsession, in which images of images are reproduced to feed our appetite.

In Stills (1980), Charlesworth isolated black and white enlargements of falling bodies in mid-air from newspapers. They are presented without context or narrative, so it is impossible to know what happened to these falling figures, or whether their jumps were triggered by suicidal intent or by the desire to escape from a burning building. Haunting and captivating, this series challenges the viewer’s desire for narrative and for attaching meaning to images. There is an elusive suggestion that perhaps by understanding the language of photography, one could work out what happened to each of these individuals, and yet there is also a harsh coldness to their representation in enlarged form. Recalling Andy Warhol’s Death and Disaster Series, this work by Charlesworth establishes a moral dilemma for the viewer by putting into play conflicting emotional states: fear, concern, voyeuristic curiosity, guilt and a need for narrative sense. With each of these emotions pulling at the psyche, it is the viewer who is left suspended mid-air in their response.

The series Objects of Desire (1983-1988) presented isolated photographs of found images of objects from magazines and catalogues, set against a saturated colour background and framed in matching lacquer. As Norton comments, this series examines “desire in all its forms, from sexual desire through to material desire.” The effect is on the one hand decadent and sumptuous, while on the other tawdry and embarrassing.

As the artist herself put it in an interview with BOMB Magazine, “I abstract objects that socially carry a strong emotional charge or symbolic signi cance.” Suddenly estranged from the objects by the frame and the colour field, the viewer is left questioning whether we really desire them. In Maps (1987), the form in the centre of the right-hand side could be from an ancient sculpture or painting but seems equally to reflect an obsession with the now obsolete compact disc. Next to it are a number of yellow blocks that recall either the Soviet video game Tetris, which was to become so appropriated by Western culture, or a pair of thick double yellow parking lines.

In Doubleworld (1995), Charlesworth continued her interrogation of the way photography shapes our ways of seeing and experiencing the world. In this series, she placed 19th century photographic equipment next in the context of still life painting. For example, Still Life with Camera (1995) features a box camera set up next to a composition of glasses, a cameo, a bottle and book, each image in conjoined mahogany frames. In Homage to Nature (1995), a miniature tree is photographed extracted from the soil with its root structure intact and placed under a bell jar for observation, against a lavish green velvet backdrop. Referencing the perception that the process of photography is an act of death, of stilling forever what would otherwise be alive, Charlesworth is also exposing the mechanism of her own image-making. Look closely and you can see Charlesworth’s studio and photographic equipment reflected in the cloche. No way of seeing can be viewed as natural, Charlesworth seems to be suggesting, and any suggestion otherwise is an illusion: we are conditioned by the technology that is used to represent images to us. Our visual perceptions have been shaped by centuries of representation and continue to be shaped by the evolution of our mass media culture.

Photographic equipment also took centre stage in the Work in Progress series (2009) in which Charlesworth conceptually folds the photograph in on itself by dismantling the distinction between the image and the materials and process through which it is made. Taking light as the principal medium of photography, Charlesworth makes light, transparent paper and the camera both subject and medium. Level (2009) takes the simple tool of a spirit level and, by isolating it against a white background, suddenly seems to elevate it to an icon of contemporary life. In a way, that is what it is: an unseen symbol that is ever-present behind the scenes in almost every image we see in magazines, newspapers and online. Charlesworth puts to the centre of the photograph what would normally be left out and we are encouraged to consider our relation to an object we may not even recognise.

Similarly, Camera Work (2009) features the silhouette of a camera and tripod, replicated upside down on one side of the image and the right way up on the other side, with the black and white silhouette also flipped accordingly. A deft deconstruction of the process of photography itself, the images also recall the sharpness of advertising materials, often reduced to a logo. Indeed, looking at the thick black lines of the camera shape against the background, one could almost mistake it for a hieroglyph or some kind of alphabet form waiting to be demystified. The implication seems to be that such a decoding is exactly what we should be doing, every time we encounter a pristine photographic image.

In some of her last work, the series Available Light (2012), Charlesworth returned to her practice of isolating objects and pictures of objects against luminous backgrounds. However, in these works, her focus seemed more to be on the ways in which light is at the heart of the photographic activity. In Half Bowl (2012), for example, a silver bowl reflects both the white table on which it is placed and the two-tone (turquoise and white) backdrop on which it is placed. Filled with water, the colours are also reflected in the pool of water. Sensitive and perceptive, this series examines how light falling on an object in a particular way can alter our response to and perception of it. The artist developed a compelling ambiguity over whether she was photographing reality or reproduction. Available Light encourages thought about whether there is a difference between these two kinds of depiction or whether everything is a symbol once rendered in the form of an image.

In Crystal Ball (2012), a suspended glass globe form is depicted against a white background and seems to reflect a vibrant and verdant outdoor scene. Suggesting a utopian future, the image challenges the viewer’s willingness to enter into its magic. In spite of an increasing cultural scepticism about photography holding any claim to be a truthful representation of reality, there is such allure in the picture that it is tempting to disregard the thought that the image could be Photoshopped onto the ball and to believe in it absolutely. The title, though, acts as a caution, as if to say that believing in photography as a natural representation of reality is akin to believing in the superstition of a fortune-telling crystal ball. A remarkably astute and considered artist, Sarah Charlesworth’s consistent exploration of mass media culture and the implications of all-pervasive photographic imagery today clearly remain more relevant than ever. 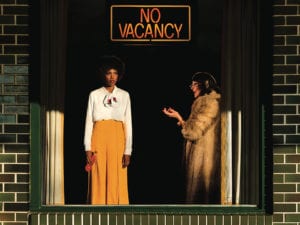 These artists explore the nostalgia – and future – of text-based signage and graphic design, from saturated paintwork to dazzling neon. 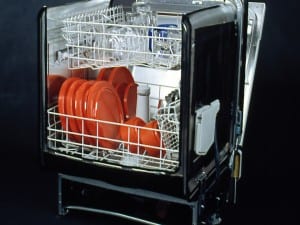 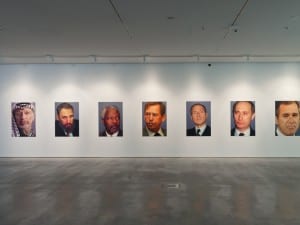 A new exhibition at Museum of Contemporary Art Krakow explores the socio-political undercurrents of European art since 1945 through to the present day.