State of the Art 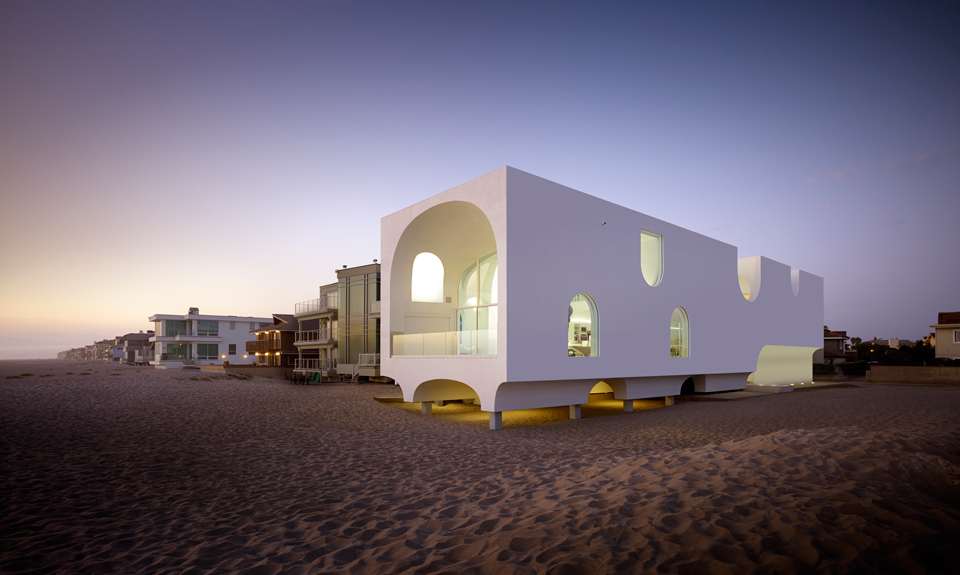 A showcase of over 100 international innovators in spatial design, in the extraordinary city which forged the world’s first skyscraper.

The city of Chicago, Illinois, is central to the history of architecture – most distinctively to the development of the iconic symbol of progress, the skyscraper. After the 1871 Great Chicago Fire left the city’s downtown in ruins, a new generation of architects emerged; given the title of the First Chicago School, this group were the first to promote the abilities of steel-frame construction and a streamlined aesthetic, which came to in uence European Modernism.

The training ground for this group was the office of William Le Baron Jenney, an American engineer and architect who had trained alongside Gustave Eiffel at Paris’s École Centrale des Arts et Manufactures. Building fortifications during the American Civil War, Jenney discovered new methods of using iron and steel, ground-breaking techniques that he took with him to Chicago in 1868 as he set out to open up an architecture firm. When Jenney was asked in 1884 to design an office tower in Chicago, he put this into practice; thus, the first steel-frame skyscraper came to be, in the form of the Home Insurance Building, Chicago. The building was fireproof, two-thirds lighter than any ten-storey building could be when built with load-bearing walls and, using interior and exterior frames for support, allowed for the slotting in of windowpanes instead of bricks, paving the way for the renowned American skylines of glass and steel towers.

The architects of the First Chicago School – Martin Roche, William Holabird, and Louis Sullivan among others – continued in this vein, creating designs that emphasised the technological developments of their buildings, coined at the time as the Commercial Style. This movement was even furthered by reaction to The World’s Fair in 1893, which launched the rebirth of the city after the fire, and saw the development of over 200 new buildings. However, most of these were built in the Neo-Classical style, incorporating Greek and Roman influences rather than the new aesthetics of the First Chicago School. The offence felt by these contemporary architects only drove the movement onwards and, led by Frank Lloyd Wright, they created further solid block-like and embellishment-free buildings, referred to as of the Prairie School (after the clear plains of mid-west USA).

While Chicago’s skyline rose up and up, the population of the city boomed and between 1910-1930 over one million new residents had arrived. To satisfy this demand came the Chicago Bungalow – a small brick house with one and a half storeys and a garden, slotted tidily into Chicago’s standard 125 x 125 lot. Over 80,000 of these had been built by the time the Great Depression hit, and the style continues to house a third of Chicago’s population.

Having been the site of such a number of significant advents within modern architecture, Chicago’s inaugural Architecture Biennial is long overdue. This city-wide event runs throughout the winter, from October 2015 to January 2016, as the largest international survey of contemporary architecture in North America. Over 30 countries across six continents are represented by 131 studios selected by Biennial co-artistic directors Joseph Grima and Sarah Herda, under the guidance of Ty Tabing as the executive director and supported by a committee including architects David Adjaye and Frank Gehry and curators like Hans Ulrich Obrist, among others. Taking its title, The State of the Art of Architecture, from a 1977 conference given by Chicago architect Stanley Tigerman, the Biennial discusses the concerns of today via 94 projects from both established and emerging practices.

Selected from a long list of 500, it was vital that the chosen studios display a variety of scales, use a range of mediums and, according to Sarah Herda, demonstrate “how di erent generations of architects carry out and develop their practice, and the issues that are most important to them” – be these environmental, social, economic or even aesthetic.

To fulfil this, the brief given to each firm was to respond to “what was at stake for them.” Their answers have come in the form of traditional architectural models as well as large- scale drawings, site-specific installations, lm works and even performance events. One such installation project takes place across the shoreline of Lake Michigan, adding four new kiosks to the 40 that already line the edge of the lake. Having succeeded in fulfilling Daniel Burnham’s 1909 Plan for Chicago, which ordered the reclaiming of the lakefront as a leisure space for the city, this is now Chicago’s most celebrated and heavily used public space, which includes over 20 miles of public parks and beaches, as well as pedestrian and cycling routes.

Herda explains that the panel for the Lakefront Kiosk Competition “received over 400 entries from more than 40 countries. Ultramoderne, a Rhode-Island-based team composed of Yasmin Vobis, Aaron Forrest and Brett Schneider, was unanimously chosen by a juror as the winner of the competition with their design Chicago Horizon.” This work is the result of a quest to build the largest at wooden roof possible within a limited budget, and uses Cross-Laminated Timber, a new carbon-negative engineered lumber product. In selecting a small team whose work has ethical intentions, Herda remarks: “The kiosk competition is a great example of how the Biennial and the city are committed to supporting young practices and innovative design.”

Throughout the Biennial’s submissions, Herda notes that “common themes, approaches and ideas started to emerge from [each firm’s] proposals”, with environmentally friendly architectural solutions such as this being a strong focus. Recycled materials come into their own through projects by firms such as Mexican office, Productora, whose “Recycled house in Tlayacapan” uses polyester structures recovered from modular house prototypes, which were developed by Mexican visionary architect Juan José Díaz Infante Núñez in the late 1960s. Each of these houses was made of six shells that could be assembled in different configurations, made of a polystyrene foam coated on both sides with fibreglass to protect it from the elements – much like a surfboard. The owner of the new home once spent family weekends in these pod-like prototypes, and had inherited the materials. Productora were given the challenge of restoring the original shells, which had been stacked up outside and left to crack, and reforming them into a series of airy, petal-shaped domes, which are organised to look like a white flower, from the air.

While environmental concerns occupy a breadth of projects, in this era of overcrowding, utilising previously unusable land is the focus of Los Angeles firm, Johnston Marklee, with ‘Hill House’: an angular, white form which hangs over the edge of a rocky LA hillside. With intelligent engineering, the home expands diagonally downwards to maximise its use of the allowable volume permitted by the local zoning code.

Meanwhile, with Independent Architecture’s “Re-Imagine Play” design for Paco Sanchez Park in West Denver, an area with concerning child obesity rates, the health of the local community is prioritised in a series of multigenerational play areas – complete with slides, an outdoor gym, and even a central area for healthy cooking classes and dance lessons.

As expected for the first event of its kind in the city of Chicago, innovation is key. Herda says: “Contemporary architecture is full of so many different perspectives and working methods. We really wanted to capture that in the Biennial.” WAI Architecture Think Tank, an extremely young, fresh firm based in Beijing, is one practice which Herda highlights as “incredibly active”, at the moment engaged in mainly theoretical projects as well as “running an independent architecture gallery in the city” and their own self-published urbanism magazine: What About It?

Tokyo architect Sou Fujimoto came to the fore in the UK through his 2013 Serpentine Pavilion design in London, which emerged as a three-dimensional grid of white bars and was used by park-goers as a quiet spot to lunch beneath, or even climb up, sit on and read. For the Biennial, his Tokyo firm unveils L’Arbre Blanc (White Tree). This 17-storey tower’s 120 apartments fan outwards, with large balconies jutting out further like the fronds of a pinecone. The Biennial exhibits a great deal of domestic scale works, pointing out the significance of architecture in our everyday experiences.

Meanwhile, Chicago-based artist Theaster Gates will open up the new Stony Island Arts Bank on the first day of the Biennial. Gates has transformed a majestic marble pillared bank that has lain derelict for years, and which he bought from the city for just $1 (with the stipulation that he raise the $3.7 million necessary for its renovation) into a new space providing a venue for artist and scholar residencies, site-specific commissions and exhibitions.

Stony Island’s marble frontage, terracotta cladding and even details such as 1920s light ttings have been maintained, and while the building will not function as a bank, there will be reminders of its history: Gates hopes to utilise the impressive original iron vaults for future artworks, and has initiated an enterprising bonds project to fund the renovations. 100 bonds were sold from $5,000 to $50,000, each of which were represented by a tablet made from the building’s original marble, and engraved with an image of the bank, Gates’ signature and the words “In ART We Trust.” As each bond is a work of art in its own right, they will increase in value, functioning like a real bond. This new intervention in the landscape is both an artwork itself and a community utility – a Gesamtkunstwerk as such.

Stony Island Arts Bank will not only be unveiled at the Biennial but also host a range of architectural exhibits, along with sites such as the Historic Water Tower – the only public building to survive this Chicago Fire – and Millennium Park, which includes Anish Kapoor’s first public outdoor work installed in the USA, a 110-ton steel sculpture inspired by liquid mercury, as well as Frank Gehry’s BP Bridge and Jay Pritzker Pavilion concert venue. The first is Gehry’s first bridge, while the second is a swirl of stainless steel ribbons, seating over 10,000 people, with a sound system designed to mimic the acoustics of an indoor concert hall. Chicago’s architectural developments continue to set a precedent, a fitting site for this Biennial which showcases, discusses and compares cutting-edge advances on an international scale. 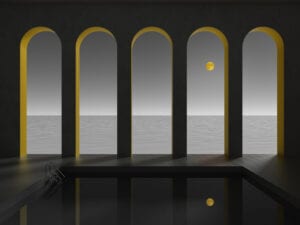 From close-up photography to digital world-building, contemporary artists are always building on the legacies of minimalism and abstraction. 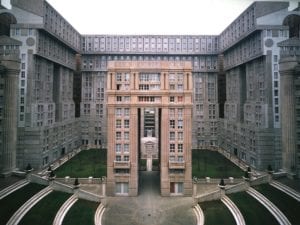