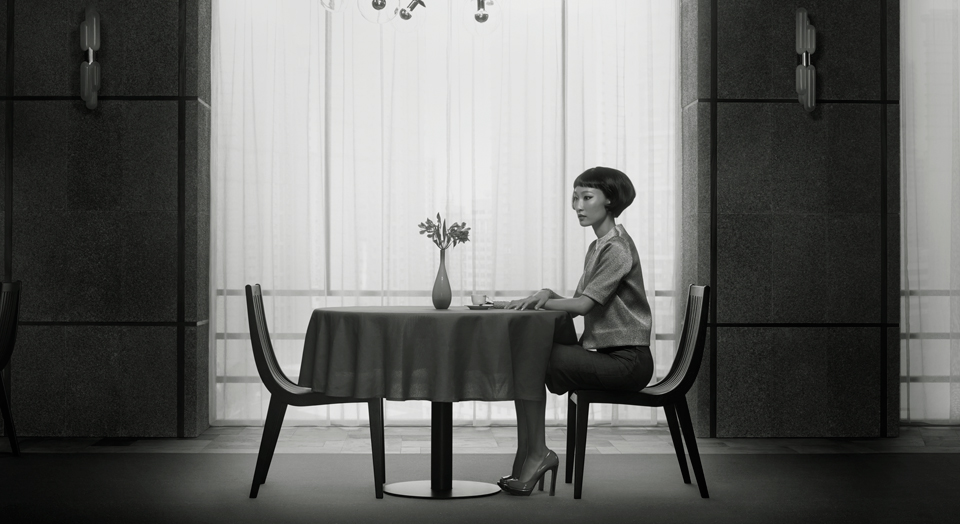 That feeling of discomfort, awkwardness and uncomfortable expectation: Dutch photographer Erwin Olaf captures the very essence of waiting in his recent series Waiting (2014). Opening in October, Olaf’s film and photographic installation is a 360-degree psychological experiment. The audience watches a woman waiting, mimicking their own role in an exchange between spectator, subject and photographer.

A commercial photographer by trade, Olaf’s eye for the exceptional in the mundane and ordinary is encapsulated in this series. While delayed at an airport, Olaf was inspired to visually record the feeling and experience of waiting. He carefully differentiates between waiting with purpose – such as at an airport – and waiting for news – such as when attending a doctor’s appointment – or for someone: “[it is] a very fluid emotion, I cannot put my finger on it. It can really hurt, without knowing why, because you’re waiting for something better.” Sophie Calle’s work Attendez Moi (Wait for Me) (2010) describes an early memory, of seemingly being left at the beach at the age of two, and that clawing desperate feeling when calling out “Wait for me! Wait for me!” Like Olaf, Calle attempts to convey, through a photographic work, that sense of abandonment which has yet to be confirmed.

While Calle’s work relies on text to express the narrative, Olaf takes photography, film, and sound to communicate the woman’s story. Shot in black and white, and filmed using professional actors, the two-channel video installation relates that terrible emotion within a 50-minute time-frame: the maximum period Olaf says he would wait for someone he loves. A friend once described “waiting” to him as “an emotion between being half-dead and alive”; it is an apt description as waiting has a static temporal dimension that is indescribable. Each person perceives and endures it in a different way, and in this work the woman appears to wait with an elegance and aloofness that does not change as the lm progresses. The slow, haunting music, composed by Sebastiaan Roestenburg, is subtle but adds to an impending sense of climax as we watch her sit, unmoving.

This lack of explicit narrative does not detract from the work; instead, like Michael Snow’s Wavelength (1967), it is the implicit nature of the piece that creates the biggest impact. The slow, methodical movement of the woman, her facial expressions, and her body language, create a psychological scene that is both unsettling and melancholic. The increasing emotional pressure of waiting hits the audience directly, and we can’t help but feel as though we are also waiting. Taking away a context and an obvious story, we are encouraged to create a collective memory, to use our own visual and remembered knowledge to connect with the protagonist.

This reliance on the audience to add to the story was demonstrated by Olaf in his earlier series Rain (2004), Hope (2005), and Grief (2007): each explored the notion of private moments in domestic environments, but unlike Waiting, they focused on the moment before or after the act. The series are disturbing because, as the viewer, you feel you are interrupting that suspended moment right as the emotion changes. This all adds to the sensation of intruding on something deeply personal. With Grief, we see a woman standing, her back slightly turned to us, hands covering her face. The observer feels as if they are encroaching, but Olaf doesn’t provide an outlet through which to leave the scene.

Olaf’s ability to convey a narrative through film and photography stems from his early career as a photojournalist. While studying journalism in Utrecht, The Netherlands, he became dissatis ed with the photographic reportage he was commissioned to do. He moved to Amsterdam in the early 1980s and became involved with an underground world of “extreme types”; some of them began to model for him. His early series Chessmen, for which he won the 1988 Young European Photographer of the Year Award, depicted these unconventional models, dressed in elaborate costumes. The series is reminiscent of the work of Joel-Peter Witkin, whose darkly imaginative and unsettling portraits and photographic tableaux revolutionised the concept of the model in late 20th century photography. Featuring models with deformities and mental illness, his work is both magical and disconcerting and refers back to the ancient science of physiognomy. Witkin abandoned the perfect ideal of “beauty” for the imperfect and even the grotesque.

This fascination with what Russian literary theorist Mikhail Bakhtin called the “carnivalesque body” is re ected in both Witkin and Olaf’s work: the pageantry of the carnival where bodily excess and the grotesque were celebrated has a direct appeal. In contrast to dominant historical representations of the classical nude, smooth and orifice-less, the “carnivalesque body” is equally strange and sensual. Olaf is fascinated by this dichotomy and with the series Skin Deep (2015), takes the classical form and exalts those aspects of the body usually seen to be shameful, illicit and unmentionable. In a 2008 Telegraph interview with Kate Salter he says, “I’m less afraid of beauty and fashion now. I never dared to touch it before, because I thought that was the ‘big world.’ Because of that fear I was a little aggressive and wanted to produce pictures that undermined it – different-sized women, older women. But in the past five or six years I’ve played much more with beauty.” It is these early series that paved the way for Olaf to be able to produce beautiful portraits without appearing to exhaust the theme of portraiture in Skin Deep, showing at Hamilton’s Gallery, London, in October.

Olaf argues that portraiture of underprivileged or marginalised people was historically presented in black and white and from up above. In his series Mind of their Own (1995), Olaf again used unconventional models: young children with conditions such as Down’s syndrome. He goes against convention, and pictures his models facing the camera, in full-colour, with hair styling and make-up: “I wanted to glamourise [it]. At that time, we had the Benetton campaign, which shed some light.” The resulting images feature his models set within a colourful border, the two melding into one or interrupting the other. This theatrical effect was achieved by interfering with the negative, burning the edges with his lighter, and pressing between two glass plates so that the negative was literally exploding between the plates. Reminiscent of school photos from the 1980s, with their deliberately gauche backdrops, this series repositions the role of the model and demands that the viewer read the image. The sitters are not portrayed as vulnerable but as powerful subjects, appropriating their own body and perceived “lower” status through the photographic portrait.

Olaf subverts aesthetic associations, denying the audience the chance to categorise upon first glance, and refashioning preconceived notions of attractiveness. As with Chessmen, the direct, confrontational nature of his photographs showcases his deeper understanding of the model within the context of the staged image. These black and white works, of men and women in Viking helmets holding spears; wearing antlers strapped to their heads, a stone tied to their backs; holding skulls with leather bindings and ropes tightly wrapped around their naked torsos, are powerful, aggressive and disturbing. Olaf places the unconventional subject as the focus of a conservative game: chess. With each player mimicking a character, the series is beautiful and ingenious.

A background in fashion and advertising photography, having worked with brands such as Diesel, Louis Vuitton, and Bottega Veneta, has enabled Olaf to bridge this gap between commercial and art photography. He understands beauty and how people wish to be perceived. With Skin Deep (2015) he features male and female nudes against the backdrop of an 18th century mansion in Holland. Except it’s not: Olaf photographed the mansion walls and then reprinted them in his studio, recreating the historical environment. His models, nude or in various states of near-nudity, are reminiscent of Robert Mapplethorpe’s graceful and provocative photographs. Neither Olaf nor Mapplethorpe perceives nudity as something shameful or threatening. They embrace the body and take away the stigma often attached to it. Olaf takes Lucian Freud’s treatment of skin and body language as a starting point, celebrating the human skin’s imperfections and the way in which light and shadow play upon it. The resulting images are intense, visually sophisticated, and provide a delicate balance between confrontation and innocence. Olaf is merely presenting the human form; it is only the audience’s own associations that sexualise it.

The slick and cinematic quality of Olaf’s work is directly in uence by Italian and German cinema, especially from the 1980s. He has experimented with film since 1987, but it wasn’t until 2003 that he started to discover the potential of film with photography. He describes the power of the two combined: “…you can influence the atmosphere of a room, you can go into the heads of people when you mix photo and lm. It influences the way you watch the movie and the way you watch the picture.” With Waiting this is done very explicitly, but with earlier works, such as Royal Blood (2000), he relies solely on one image to provide the narrative. This series of highly stylised portraits of near-perfect models splattered with blood relies on the initial shock-value of seeing the image, and then the narrative of the recognised model – Princess Diana, Jackie Onassis, and others. Olaf calls into question the manufactured perfection we as consumers demand from our icons of modern-day society.

This affection for people and for imaginary worlds dates back to his childhood: “I fantasise. I like to create my own worlds in my head.” The obsession with make-believe, whether it be the ageless celebrity of Royal Blood, or with the decadent, bound gures of Chessmen, parodies his audience’s own obsessions. In Waiting, this is less explicitly conveyed, as what Olaf principally highlights is our predilection for watching others, for being voyeurs. Social media outlets allow us as a culture to feed our insatiable appetite for images. Olaf recognises this and constructs an environment where we can sit and watch a woman wait: it is unsettling to see our obsession realised at this level and even more unsettling that Olaf can visually articulate it so easily.

We interview photographer Adel Quraishi about his portraits of the eight remaining Guardians of the Prophet’s Mosque in Medina, on show at Leighton House Museum, London until 29 November. 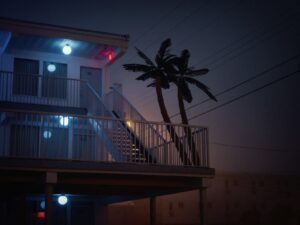 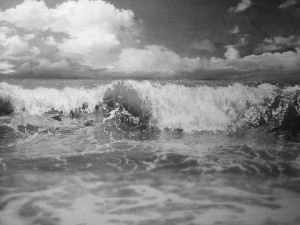 Drawings by Paul Cadden at Plus One Gallery, London

Plus One Gallery will host a solo show of gallery artist, Paul Cadden. This exhibition will feature 13 new hyperrealist drawings, which explore social scenes, portraiture and deserted landscape.