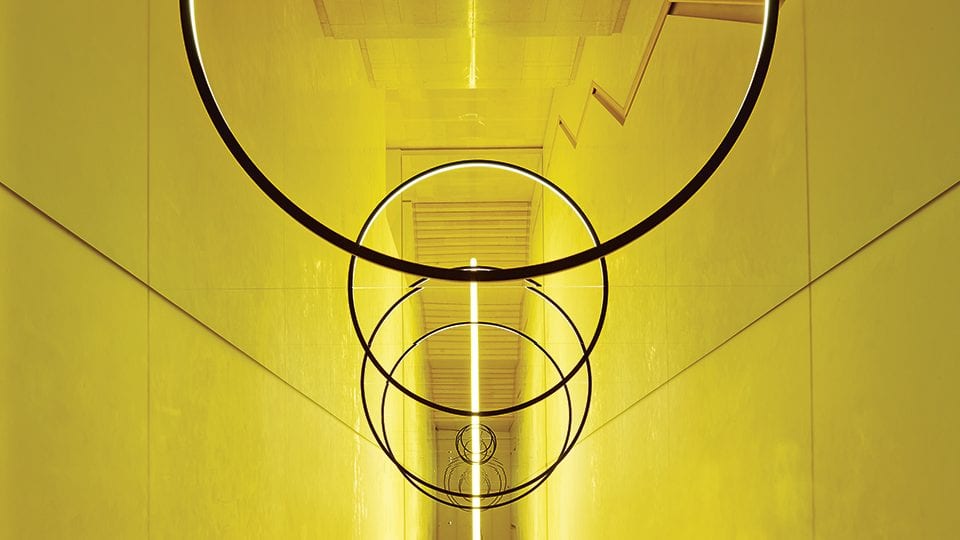 In Iceland, the nation’s parliament is referred to as the “Althing,” the loose translation of which means a space for each and every object, person and exchange – a meeting place where people from all walks of life can come together to speak about differences and engage in wider productive dialogues. The French philosopher Bruno Latour (b. 1947) further unpacks the term: “A thing is, in one sense, an object out there and, in another sense, an issue very much in there.”

This notion that strife and conflict are inherent to matter is an idea that, for years, has resonated deeply with Latour’s close friend, Danish-Icelandic artist and architect Olafur Eliasson (b. 1967), whose socially conscious creations have long challenged viewers to confront real-world issues that range from climate change to immigration and displacement to sustainable agriculture. Just as no topic, regardless of its complexity or polarity, appears to be off limits, no medium seems too challenging for him to tackle. The practitioner’s wide-ranging oeuvre encapsulates large-scale, immersive installations, miniscule sculptures and portable electronics, paintings, films, cookbooks and, more recently, architecture.

Eliasson’s multifaceted, confrontation-generating output is the subject of a new and exciting tome by Phaidon, titled Experience. This weighty compendium of essays, interviews and mind-bending colour images spans three decades of innovation and experimentation by the artist, and charts the distinctive ways in which Eliasson’s custom-built, perception-changing environments break down barriers, not only in relation to the viewer and the space, but also with regard to other people, cultures and belief systems. “He’s very interested in how we react to our surroundings and how we understand the world,” comments Anna Engberg-Pedersen, Head of Research and Communications at Studio Olafur Eliasson. “What do we see? Why do we see it? Why do we understand the world in the way we do? These are questions that have all been central to his practice since the very beginning.”

Born in Copenhagen, the artist has maintained a steadfast interest in space and consciousness, and the myriad ways in which people interpret and navigate their surroundings, throughout his creative life. As a teenager, Eliasson had a passion for break-dancing and from this developed the notion that personal space can be altered, distorted and otherwise disrupted using only the body. This fascination with perception grew throughout his education at the Royal Danish Academy of Fine Arts and in the early years of his eponymous studio, which he established in Berlin in 1995.

His award-winning enterprise has expanded exponentially over 23 years – Eliasson’s work has been showcased in exhibitions across the globe, including a solo show – The Speed of Your Attention – currently on view at Tanya Bonakdar Gallery, Los Angeles (until 22 December), and his team now comprises more than 100 technicians, architects, craftspeople, historians and programmers. In summer 2019, Tate Modern, London, will launch a survey of the artist’s career. The exhibition follows his colossal 2003 installation The weather project – presented in the Turbine Hall and considered one of Eliasson’s most iconic creations – and the 2004 installation of the mesmeric Your double-lighthouse projection that envelopes the viewer in a sea of monochromatic light.

As Michelle Kuo, the Marlene Hess Curator of Painting and Sculpture at MoMA, New York, and former Editor-in-Chief of Artforum, describes, in the introduction to the Phaidon publication, one of Eliasson’s most remarkable talents, which he has demonstrated relentlessly throughout his career, as the distinctive ability to arouse tension through installations and spaces. It’s through this force that he inspires understanding and empathy in countless international viewers. She writes: “[Eliasson] understood that our togetherness, our intertwinement with people and things and places, is never seamless or whole, never complete … His art makes a difference; it generates experiences that are discontinuous, always changing, shifting in relation to others and ourselves.” These consciousness-awakening experiences have been described by the artist as “frictional moments” and they’re nearly omnipresent in projects highlighted in this text.

Amongst the most tension-generating creations is a 360-degree walkway, Your rainbow panorama (2006-2011), for the ARos Aarhus Kunstmuseum in Denmark. The winning commission for the museum’s rooftop revamp, the piece casts rainbow hues over the surrounding landscape, dividing it into zones of colours. Viewed from within, the enclosure functions as an alternative lens from which to see the city, and from a distance, it serves as an orientation device – a new brand of north star – as each band of colour can only be viewed from a specific vantage point. Though an addition to a pre-existing structure from Schmidt Hammer Lassen Architects, this mindful construction is regarded as a local landmark, and a navigational beacon, in and of itself.

A similar phenomenon transpired during the 2011 solo exhibition at SESC Pompeia, São Paulo, Brazil. The show’s titular artwork, Seu corpo da obra (Your body of work), was a nod to the now-legendary Brazilian artist Hélio Oiticica, who is recognised today for a trailblazing exploration into the multidimensionality of colour, and comprised dozens of sheets of bright plastic. These massive cyan, magenta and yellow panels were suspended from the ceiling to form a multi-hued labyrinth which visitors could traverse. The movement and vantage point of each individual determined the colour they perceived and no two encounters were alike.

Eliasson’s real gift for manipulating the viewer’s perspective, however, lies in his ability to alter not only how a person sees the world around them (as illustrated in the Aarhus and São Paulo example), but also how they see themselves. Many installations call upon museum-goers to play an active role – their image is often reflected directly into the work, elevating them from passive audience member to willing and active participant. His site-specific construction Gravity Stairs (2014), for instance, is a modern take on the mise en abyme. Created for the Leeum, Samsung Museum of Art in Seoul, this permanent installation features a mammoth, reflective model of the solar system arranged above stairs. As visitors climb the staircase, they are confronted with a kaleidoscopic view of planets, and, in the centre of it all, their own likeness.

With a growing inventory of large-scale projects like Seu corpo da obra and structurally significant contributions such as Your rainbow panorama and Gravity stairs, it’s no surprise, then, that Eliasson has opted to add the title of architect to his ever-expanding list of credentials. In 2014, the artist formed the experimental firm Studio Other Spaces (SOS) with German architect Sebastian Behmann and earlier this summer the pair unveiled their first completed building, Fjordenhus, in Vejle, Denmark. In its conception, the new Kirk Kapital headquarters challenged the limits of digital rendering and models. In its awe-inspiring execution, the brick, ellipsoidal office space – which appears to rise from the waters of the Vejle Fjord like a sandcastle – is as much a life-sized sculpture as it is a functional  and lived-in structure. “Fjordenhus is really quite different than other buildings because it’s a bit weird – you feel outdoors because you can see the harbour and feel the wind, but you’re also contained,” remarks Engberg-Pedersen. “That’s something that came out of this dialogue taking place between art and architecture.”

In signature Eliasson style, the master maker has taken space-creating impulses one step further, investigating new mechanisms through which his constructions can transcend the physical world and enable art lovers and design enthusiasts – regardless of their location – to experience his work digitally, through experiments in virtual reality, digital art and social media. As Engberg-Pedersen explains, pivotal to Eliasson’s practice is the idea that an encounter with art or architecture “does not only take place in a gallery. It can happen in the street, in a public space or online.”

The studio has more than 270,000 followers on its encyclopaedic Instagram page, and the account’s twice-daily posts include a selection of images from inside the company’s day-to-day activities, including elegantly plated meals from Studio Olafur Eliasson Kitchen (which is headed up by the artist’s sister, chef Victoria Eliasdottir), interviews with the artist, video footage highlighting recent exhibitions and architectural projects, behind-the-scenes snapshots, and, of course, the occasional selfie of a bearded Eliasson trekking through Reykjavik or posing with friends, fellow creatives or collaborators such as model Naomi Campbell, acclaimed filmmaker Alejandro González Iñárritu or artist-activist Ai Weiwei. Eliasson teamed up with the latter for the 2013 web-based venture Moon – a participatory drawing that took four years to create and features a rotating globe of messages and drawings crafted by a community of online users. In the write-up for this piece, the project’s founders penned the lines: “Creativity defies boundaries. Ideas, wind and air no one can stop.”

In 2017, the pioneering producer further evolved this concept of a collaborative art-making experience with the release of an original project on the virtual reality exhibition space Acute Art, which is billed as a museum without walls. Titled Rainbow, Eliasson’s contribution to the platform invites viewers to align digital water droplets, light waves and their line of sight to create the titular weather phenomenon. Multiple users, regardless of their physical location, can engage with one another to produce a digital rainbow, further testing the limits of literal space and boundaries. “VR promises, in a way, the opportunity for people to enter spaces that they’re not physically in,” explains Engberg-Pedersen. “And that’s an interesting thought for Olafur.”

Through examining this publication, it becomes apparent that regardless of scale, material or medium, a consistent ethos is ever-present in Eliasson’s work. Both a child-like curiosity about the world around us and an unwavering commitment to questioning the status quo in the service of humanity are always at the heart of his wide-ranging output.

In keeping with Latour’s earlier meditations, Engberg-Pedersen states: “Olafur supports a friendly embrace of conflict – one in which you can reach a territory where you can be together despite the wider differences of opinion.”

Olafur Eliasson: Experience is published by Phaidon on 15 October. www.phaidon.com 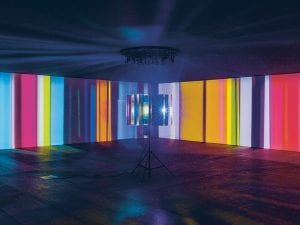 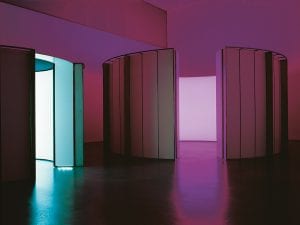 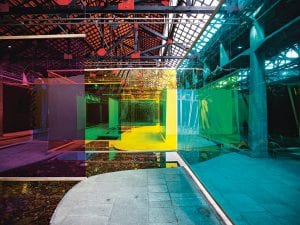 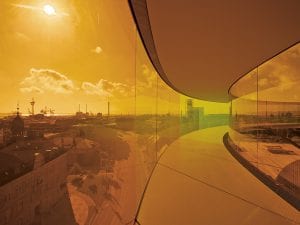 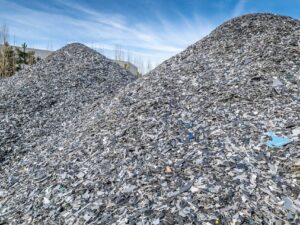 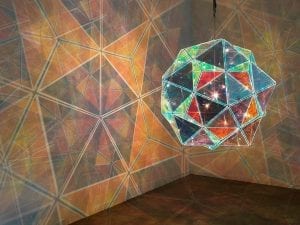