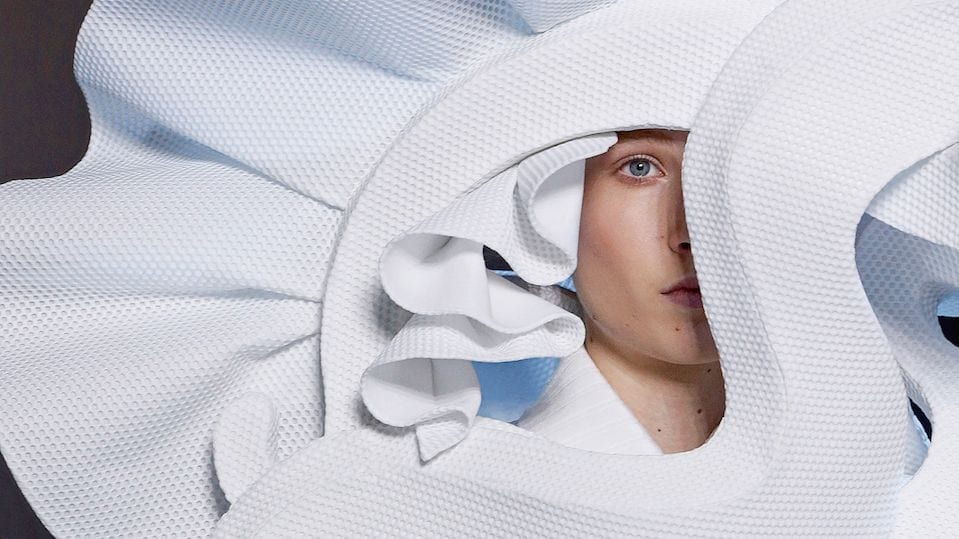 The National Gallery of Victoria, Melbourne, explores the designers’ notion of wearable art through a selection of their most iconic works.

Viktor Horsting and Rolf Snoeren, the minds behind the avant-garde luxury brand Viktor&Rolf, are first and foremost fashion artists. Their approach may have led to collaborations with major high street retail chains, but their work remains primarily driven by their desire to “use fashion as a means of creative expression,” and utilise its “possibilities and impossibilities in order to create the unexpectable.”

The duo have enjoyed an illustrious career of achieving just that, ever since they first met as students at the Arnhem Academy of Art and Design in the Netherlands and began working together upon their graduation, soon relocating to Paris. Their events have never failed to amaze and delight, fuelled not only by the staggering creativity that characterises the works but also by the cutting edge and often sardonic approach that they take to the business of the industry in and of itself. Their now iconic show Russian Doll (1999) exploded the concept of a traditional runway presentation by piling 70 kilograms of garments, layer by layer, on a single stationary model. The weight of expectation both reflected and turned inside out the anticipation that is associated with a Russian doll, a toy which one progressively takes apart in order to reveal its core. Layers of active participation are vital.

“In our minds”, the couple state, “fashion and art are not separate entities. We have always worked with the medium as a tool, as a means of expression.” In the past, there have been times when their pieces have almost felt like an outlet for the particular kind of frustration created by the pressures that the industry puts on creativity: their Fall 2008 ready-to-wear collection entitled NO, incorporated the word into all of the garments, either within a textile pattern or as a three-dimensional part of the creation, in a light-hearted yet poignant rejection of the industry and its demands.

More recently, their Spring / Summer 2014 work Red Carpet Dressing playfully – and with a heavy dose of irony – literalised the concept of designers asking celebrities to promote their brands on the red carpet at public and media events: a heavy-duty nylon carpet was the sole material that was used in the creations. “Sometimes,” Horsting and Snoeren confess, “we feel as if our work is like therapy!” There is no doubt that they inject a large amount of their own personal experience into their work, with the collections that they create becoming, at times, almost works of autobiography. As the design duo put it, their work “always comes from our emotions and from our position in the fashion world.”

The cheeky literal-mindedness of Red Carpet Dressing is one the pair have largely imbued into their personal concept of wearable art, a notion that is becoming progressively more literal and, perhaps for this very reason, more surreal with every offering: they have, in turn, offered pieces in which aesthetic components come to life: gowns created out of still-framed canvasses, and garments shaped as sculptures which completely engulf their wearer. In the words of the late Richard Martin, curator of the Costume Institute at the Metropolitan Museum of Art: “Viktor&Rolf’s presentation mingles statue and runway, letting us see both the living statue of a fine-arts identity and the animation of a couture.”

The Spring / Summer 2015 Haute Couture line Van Gogh Girls saw infamous paintings of the rural countryside materialise as oversized, almost fantastical creations, featuring enormous straw hats shaped into hay bales and striking, sculptured owers emerging, three-dimensional, from oral patterns. Wearable Art, (Autumn / Winter 2015- 2016) included picture frames shaped into dresses and textiles printed with images of Renaissance paintings. As with Russian Doll, the team made an appearance in the show, only this time it was to help some of the models remove the “painting” gown – revealing a smock under-layer. The duo then proceeded to hang the paintings on the back wall of the stage, and by doing so completing the artwork – gown – artwork circle, which also serves to underscore the doubling of the fashion show runway as an artistic exhibition space.

Performance of Sculptures (Spring / Summer 2016) comprised works in which the boundaries between wearer and clothing all but dissolved: the models were frequently hidden underneath the monumental, oversized pieces, and the overall impression left was one of both a “sculpture that had been humanised and a model that had been sculpted.” The dynamism of art, be it visual or constructive, is tapped into for each creation: the voluminous gowns and extravagant accessories presented here all display exactly the kind of inviting, tactile three-dimensionality that one usually expects to encounter in an art gallery.

Notably, Victor&Rolf creations have been inspired and worn by iconic female performers including Björk and Tilda Swinton, both known not only for their talent but also the fiercely independent way in which they pursue their artistic paths. The former, in particular, is a performer whose unequivocal status as a style icon forms an inextricable part of her identity, as asserted by the care and attention she devotes to constructing her unique appearance – including hair, make-up and, of course, clothing – for videos, photo shoots and live performances. It could be said that Björk’s creative brand hinges, in a lot of ways, on a professional image of the performer as a living aesthetic entity – a similar blurring between the individual and multi-media to that which underlies Viktor&Rolf’s Performance of Sculptures.

It is perfectly tting, then, that in Fashion Artists, a show curated by Thierry-Maxime Loriot at the National Gallery of Victoria, Melbourne, the innovative duo are presenting a selection of their work which epitomises their notion of imaginative expression as a wearable element: “iconic, striking, and sculptural were key words,” they explain. This exhibition is an exciting opportunity to bring their work to the Southern hemisphere and, by highlighting specific examples of their work, to share the ways in which for them “Haute Couture has always been a laboratory of artistic expression.”

The creation of wearable art places Viktor&Rolf in a continuum of practitioners who have strived to achieve similar effects in their work: from established names in the industry, such as Iris van Herpen, the pioneer of craftsmanship and innovation, to the generation of up-and-coming designers whose ventures in the eld are being showcased by the Wearable Art Awards (WOW) in Wellington, New Zealand.

Horsting and Snoeren feel that what sets them apart from their peers is their uncompromising artistic integrity: “we always stay true to ourselves and our creative core,” they stress, adding “we develop and produce the collection entirely in our own atelier,” a process which ensures that conception and production are in complete synergy. This, for them, is the most rewarding aspect of creating couture.

NGV also hosts a selection of work-in-progress Dolls – replicas of antique dolls dressed in the team’s most iconic looks. Each season, Horsting and Snoeren explain, they create an Haute Couture mannequin which represents that season’s line, thus gradually building up a retrospective collection summarising all their works up until the present.

Is it a case of demonstrating a continuation between old and new, highlighting the di erences between the two, or bridging the gap between past and present? Probably a bit of all three. The duo themselves consider that creating the dolls “takes the temporal aspect away from the collection and makes them almost eternal, or at least timeless.”

Simultaneously, the pair admit that “the contradiction of fashion clothes on a historic toy” creates an “unsettling” atmosphere, one that is aided by the further juxtaposition of big and small, which renders the regular-size mannequins even stranger. There appears to be an almost self-conscious theatricality at work in the antique oeuvre, a purposeful setting up and bridging of a gap of creative dissonance.

This is not the only self-referential use of materials that the couple have engaged in. Vagabonds, (Autumn / Winter 2016) was created by recycling garments from previous seasons, in a process that they dub “conscious designing.” From the old comes the new: past fabrics and mementos are pulled apart only to be put together again, into novel creations – a kind of tongue-in-cheek retrospective at the heart of the new work. Any artistic endeavour, be it painting, music, literature, and so on, involves a plundering of sorts into the practitioner’s past, a weaving of poignant and personal memory into the work.

“For us,” Horsting and Snoeren acknowledge, “Vagabond was a very liberating experience. Destroying old creations and making something new and beautiful out of it.” This almost ceremonial shedding of the past seemed to have a freeing e ect, by the very act of feeding the past into a work of the present – in essence, this “turning to memory” has meant that the duo could now “move towards the future.”

Alongside the main exhibition, the NGV Melbourne host a separate one for children: Atelier: Viktor&Rolf for Kids, aiming to “encourage them to explore their creativity through interactive multimedia activities, including a particular focus on the olfactory experience.” The event is hosted in an immersive atelier, where the younger visitors will be invited to create their own accessories as inspired by the pieces – such as bows, collars and elaborate ru es. The end-to-end fashion experience is completed by taking part in a self- staged photo shoot against one of three black and white backdrops: a “harlequin-themed” space, a room re ecting

“the designers’ fascination with owers,” or a fairytale forest. For Horsting and Snoeren, the challenge of creating a special children’s wing for the exhibition presented a great challenge that they were very excited to take on, for personal reasons and their own memories of the creative potential and receptiveness to ideas that is inherent in young minds. “We remember that when we were young, fashion made such an impression on us, so we hope that we can give the same back.” The show is complemented by two publications: a richly illustrated catalogue featuring photography by Dave LaChapelle, Cindy Sherman, Annie Leibovitz and Andreas Gursky, alongside an interview with the designers and other material illuminating their work; and a kids’ activity drawing book inspired by the event, leading young readers through the exuberant works and inviting them to create their own. 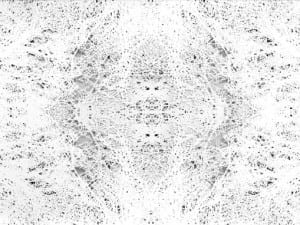 Short fiction writer Keren Heenan is one of a selection of writers shortlisted for the Aesthetica Creative Award and published in the Annual. We present an extract from Heenan’s Lament. 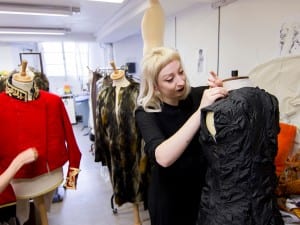 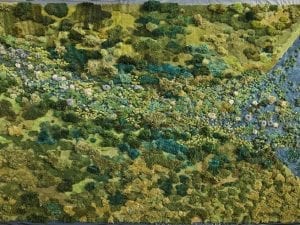