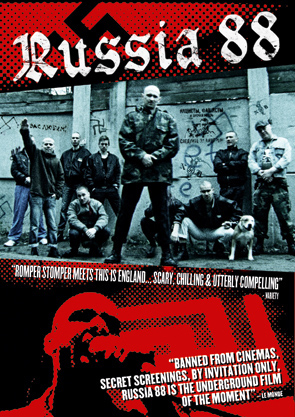 To appreciate fully the controversy surrounding Russia 88 (banned in cinemas across Russia), one must take into account that were it not for Mikhail Gorbachev’s Glasnost (openness) policy in the latter half of the 1980s, this film would never have been made.

Set in modern day Moscow, Russia 88 follows a group of fictional neo-Nazis as they attempt to make propaganda videos designed to stir up racial hatred. Shot in a documentary style with an obvious nod to films like Romper Stomper and Man Bites Dog, the superb performances combine with a bleached, almost monochrome, Muscovite landscape to make Russia 88 a disturbing, uncompromising and above all, important film.

The film’s bitter irony is a reflection on the relaxation of censorship and increase in individual freedoms that followed Glasnost, which also led to the rise of nationalism and a reawakening of simmering ethnic tensions. It is the concept of freedom as a catalyst for fear and hate, which is at the core of this complex, violent and often darkly funny film.