Rhythms from the City 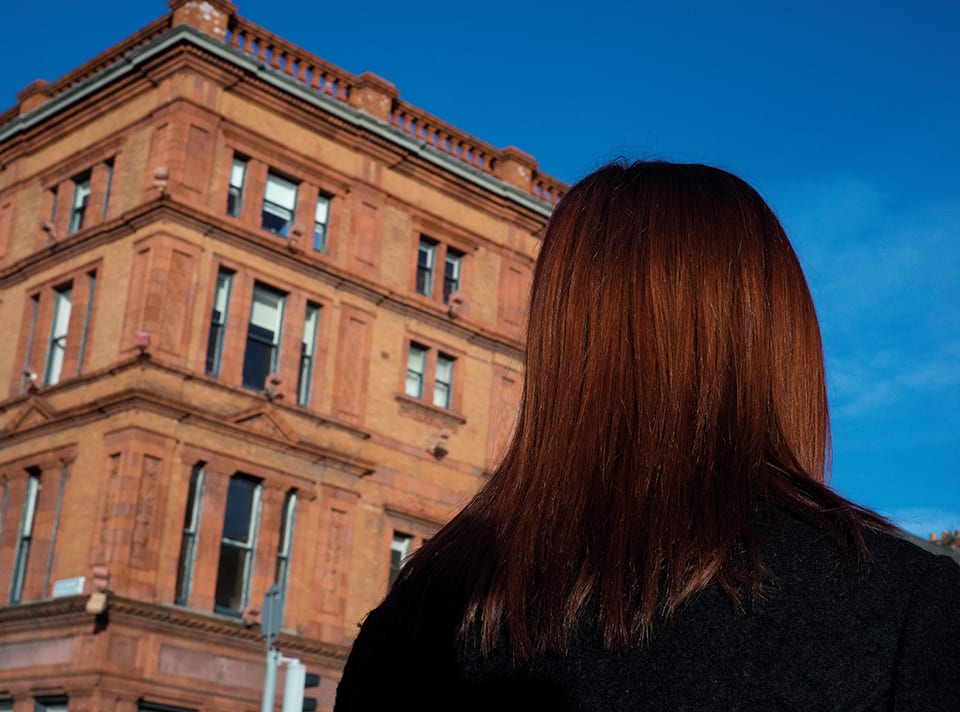 Eamonn Doyle has quickly moved from music producer and DJ to street photographer, documenting Dublin’s inhabitants through an anonymous lens.

Eamonn Doyle (b. 1969) has walked up and down O’Connell Street – the longest thoroughfare in Dublin – for most of his life. He would often take the route to get to work, as the founder of the Dublin Electronic Arts Festival and both the Dead Elvis and D1 independent record labels. Flick to 2019: Thames & Hudson publishes a major monograph of Doyle’s images, entitled Made in Dublin. A rhythmic, pulsing collection, the book produces a map of the urban landscape through three bodies of work – i, ON and End.– bouncing between its inhabitants and translating the over-bearing background hum into bold, visual compositions.

So where did the journey begin? Having graduated with a photography diploma in 1991, Doyle barely touched a camera for more than 20 years, instead accruing major acclaim as a producer, DJ and music manager. The Irish Timesnotably stated that D1 was “one of the most important chapters in Irish music history.” Following this, Doyle began to lose interest in the industry in an age of heavy postproduction and pre-prepared tracks. Instead, he steadily became enamoured by the daily routines of his elderly neighbours – strangers who passed his front door on their way to the city centre to collect a paper, pensions or daily provisions as a ritual habit.

Circa 2008, Doyle dug out a camera and began to capture them – without showing anyone the results – until self-publishing the early iterations of his first collection, i. He then posted two limited edition copies: one to Alec Soth, the other to Martin Parr. On April 1 2014, Parr circulated the book through his Flickr account, pronouncing it “the best street photobook in a decade.” Within a fortnight, he had sold out of the entire run of 750 books. Michael Hoppen, the photography collector and gallery owner in Chelsea, London, got in touch to ask Doyle if he might like gallery representation. Within two years, Doyle was at the forefront of a solo show as part of the prestigious Rencontres d’Arles festival.

This timeline of events can largely be drawn to these endorsements; however, the simplicity of the images has transfixed a myriad of viewers, and is what continues to appeal to contemporary audiences across the globe. As Parr’s Flickr post continues: “These hunched street walkers of Dublin express so much character, yet we never see their faces. It’s so powerful. The directness is brilliant.” Creating a concise and distilled image is often the end result of many hours honing and perfecting an artistic process, with a lot of time spent searching for, and understanding, the exact way one intends to capture a nebulous thing. With that in mind, Doyle’s approach was wholly inspired by great literary icons.

No discussion of Irish literature can be complete without reference to James Joyce (1882-1941). However, Joyce’s influence extends far beyond this; he is also the first name to be recalled when thinking about the “flâneur” – the aimless wanderer, a term to be considered in Doyle’s provocations of the landscape. As The Guardian’s Sean O’ Hagan writes in the book’s introduction: “The poet Patrick Kavanagh believed that the parochial was universal, that all human life was contained in the small, rural Irish parish he grew up in. James Joyce adhered in his own way to the same principle. Having fled Ireland for a long exile in Europe, he evoked the atmosphere, people and places of his native Dublin, with an almost forensic eye for minute geographical detail.”

However, it was Samuel Beckett (1906-1989), the absurdist and avant-garde playwright, who truly influenced Doyle; iwas directly inspired by the short production Not I. “I was obsessed with Beckett when I started taking these photos. He understands Dublin, but he strips away the context of his characters. I started taking images that pare everything back.”

The first work that communicated this methodology was of a solitary woman covered by an ornate head-scarf and powder-purple coat, shot close-up and from behind, with her face hidden from view. “The older face is such a loaded cliché in this type of image-making,” Doyle noted. “With Beckett’s writing, it’s not what’s said that’s intriguing, but what’s not. I wondered whether you can apply that to photography?”

With that, Doyle begin to craft a unique style, being as close as possible to subjects without disturbing them, standing on his toes to capture them from above. This can be seen in the featured compositions – bright orange jumpers, polka dot shirts, bold yellow coats and the edges of skirts providing limited information about their wearers. The intention was to capture each passer-by unposed, unaware and uncommunicative – smoking a cigarette or crossing the road, enacting a routine or hurrying home. “If they noticed what I was doing, I’d stop straightaway,” he says. “I wanted them oblivious.”

Doyle also wanted his subjects in isolation, with no other present figures. He would focus on the elderly and, often, the impoverished, as well people from different ethnicities. It’s a sympathetic series, capturing both the strength and the fragility of all citizens as a picture of the world around us – mothers, fathers, sons and daughters who are easy to ignore when ploughing one’s own way through a busy urban setting.

By the time the Arles exhibition rolled around, Doyle had followed up with two further bodies of street documentation: ONand End. Seen together, the three bodies of work interrelate to communicate a striking portrait of a modern and multicultural urban Ireland. Beyond that, they demonstrate an artist adept at creating from the flux of the street the extraordinary within the ordinary, tying Doyle’s interests in literature, and background in electronic music and altogether representing the rhythms of life. “The city’s concrete, brick, tarmac, dirt and dust are as much characters as the people. These factors are certainly musical beats and textures within the score of the whole city, including a huge element of repetition, but a repetition of individual characters.”

Niall Sweeney expands upon the notion in the new monograph: “Made in Dublinis the city as cinema, just as revealed itself in real time through the lens of Doyle, restating the intertwined looping dramas, its light and texture, psyche and the movements of its people, as they unfold and pass through. It is about the shapes and beats that they, that we, unconsciously go through together as one. The photographs have been made over a short period, in the same place and in no particular order, with thematic patterns and subjects emerging as the work grows exponentially.”

Commenting upon the evolution of the series from start to finish, Doyle notes: “With my first book (i) most of the people seemed to be in some state of stasis with no sense of movement around them. The work was preoccupied with figures consumed by introspection. The dramas in the following book (ON) are far more environmental. They are contextualised a lot more against the backdrop of the city.”

Like his literary influences Doyle has also become a notable penman of the streets – with a camera as his medium, rather than the written word. “There’s going to be an inevitable sense of the flâneur with any kind of street photography,” Doyle says, when asked about this. “Beckett and Joyce were both doing two very different things with their texts and using language in very different ways. I can relate to both and feel like replicating both in visual terms depending on my mood.”

In sharp contrast, however, is the fact that both literary icons were exiled from Ireland – and wrote primarily in Paris. The ability to express, through words, the sense of a place without being physically in it is something that, at this point in time, evades photography. But, tantalisingly, that may change  and may hint at a possible future evolution of Doyle’s artistic process. “It will be fascinating to see what happens as technology allows for total discretion with camera implants, total recall and whichever much more highly developed version of Google Street View is coming down the line,” he says.

Although Doyle will undoubtedly get a new rush of interest in his street photography with the Thames & Hudson publication, he has recently – for complex and personal reasons – withdrawn from the urban environment. On the exact same day that Parr made that fated endorsement, Doyle learned his mother, Kathryn, was diagnosed with cancer. She died in March 2017, after a five-year-long battle. “But she never managed to escape the grief of losing her son,” Doyle says. Sorting through her possessions, he found piles of notebooks that had been hidden from the family. His mother, he realised, had written countless letters to Doyle’s brother, Ciarán, who, in 1999, had died at the age of 33. “There were thousands of them,” he says. “She’d written a letter to him every day. They were like private prayers.”

The death of his mother, whom he cared for privately, as he became internationally known, hit him hard. The realisation, in addition, that he had never properly allowed himself to grieve for Ciarán, came as a double shock. Doyle was, at the time, exploring a series on the west coast of Ireland, focusing on the kinship between traditional Gaelic song and north African music – a lineage developed over ancient trading lines. The work, by his own admission, wasn’t coming together.

Kathryn, as a figure, a muse and a constant emotional icon in Doyle’s mind, provided another point of departure away from the coast. As a result, he created his most recent series, K. A dramatic development from the metropolitan trilogy, it centres on a female figure wreathed in a Gaelic veil, a garment used for mourning. Doyle revisited locations and captured – at first light and dusk – the figure situated in many of the bucolic places he visited on holiday when he was a child. It’s a devastatingly powerful series, which, after its premiere at Paris Photo in 2018, looks set for involvement in many festivals and exhibition spaces over the next year. Further to this, Doyle will have his first solo exhibition at RHA Gallery, Dublin, and will present a video installation at Photo London with Michael Hoppen Gallery (16-19 May). He will also be honoured with a retrospective at Fundación MAPFRE, Madrid, this September, proof of his widespread acclaim.

Crossing cities and continents across 2019, Doyle is a key visual icon for the 21stcentury, and one to watch for the future. He is an artist who demonstrates the empathic and deeply human qualities of photography in an age of disconnect – a rare skill that should be celebrated. Where and what he does next is anyone’s guess, but one thing’s for sure: wherever he wanders next, it will be worth following.

Made in Dublin is published 7 March courtesy of Thames & Hudson. 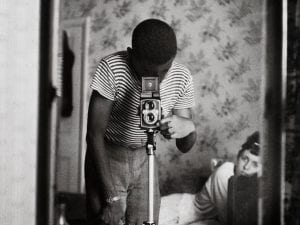 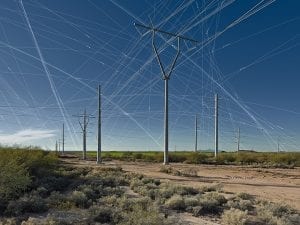 Athens Photo Festival’s 30th anniversary celebrations include an exploration of critical issues and the ongoing shifts in dialogue with the past. 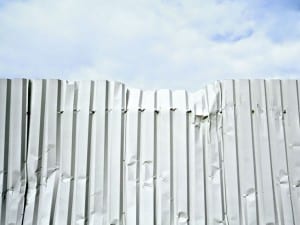