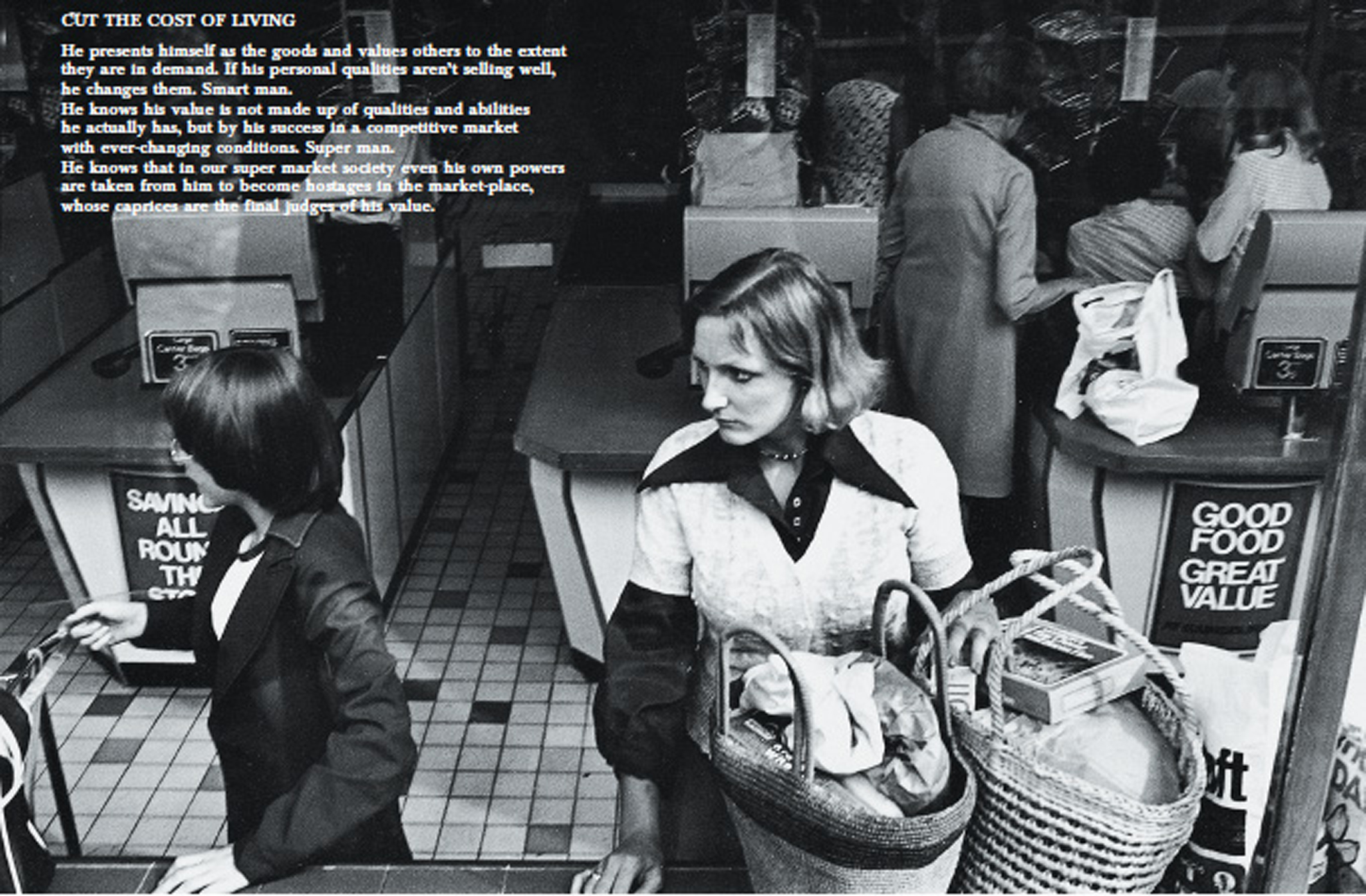 11 large photographic prints of Britain in 1976 overlaid with white text: pasted directly on to the gallery wall, these will be scraped off— like advertisements— at the exhibition’s end. Richard Saltoun Gallery has chosen this bold presentation strategy for Victor Burgin’s (b. 1941) UK 76 (1976) to present the series as it was first exhibited.

In the face of most art’s pretensions to perpetuity, this statement of artistic transience and the explicit rejection of the idea of art as commodity is particularly trenchant. But one should expect no less of Burgin, who first rose to prominence in the late 1960s as one of the originators of conceptual art. Conceptualism’s characteristic negation of the object is clearly apparent in UK 76, displaced in favour of a theoretical critical focus on text and the process of meaning-making.

The question of images and their relationship to text has preoccupied Burgin, who is also a writer and theorist, for much of his career. By combining photographic images with superimposed text, UK 76 examines the relationship between explicit and implicit meaning. Burgin photographed a broad swathe of British society in the social documentary style: we see bustling, multicultural city streets, factory labourers at work, and picturesque yet deserted country cottages. In a format familiar from magazine advertising, short texts are superimposed over each image. The rhetoric as well as the forms of mass media are imitated; if the photographs are a visual cross-section of society in 1976, then the texts are equally indicative of a range of ideologies and their particular written registers. One poster, offering a clue as to Burgin’s own concerns, asks us to consider how mass media works to “direct activity towards the maintenance of the existing order.”

Several captions mimic the blithe, blandly familiar promises of consumer culture. A photograph of a street in an uninspiring new-build estate, peopled only by an old woman doing her shopping, a young mother, and a stray dog, describes a near-fantastical idyll: “Ocean crystal clear. Sea anemones. Turquoise waters. Total immersion. Ecstasy. TODAY IS THE TOMORROW YOU WERE PROMISED YESTERDAY.” Another highlights the flattening absurdity of high fashion’s imperatives, given the realities of class, race, economic, and other differences. A multi-ethnic group of various ages waits for a city bus, while the floating text serenely describes the aesthetic of a Mayfair “lady”, in which “every element is pale and perfect.”

The contrast between quotidian life and mass media aspiration is here almost humorous; elsewhere the tone is that of poetic fiction, descriptive in the manner of newspaper journalism that strives to conceal its own bias through apparent objectivity, or else is stridently revolutionary: “Resistance did not last long […] the monarchy was disintegrating.” This last register rings truest to Burgin’s own ideological position. In another project undertaken the same year as UK 76, Burgin produced What does possession mean to you? A thousand posters were pasted around Newcastle upon Tyne that asked this question, alongside the statement: “7% of our population own 84% of our wealth.” Bad as that sounds, it is worth remembering that in today’s Britain, the richest 1% own as much wealth as the poorest 55%.

Given the unmistakable continued relevance of some (perhaps even most) of Burgin’s statements in today’s Britain, the fact this exhibition was mounted to mark the 40th anniversary of UK 76 is particularly poignant. One print (featuring a young, half-naked woman) bemoans: “those who are compelled to reproduce their own continual poverty, who are being asked to tighten their belts.” In an age of austerity in which widespread cuts to the UK’s welfare system hit those on the lowest economic rungs the hardest, Burgin’s work has a certain tragic relevance today. Forty years on, it still behoves us to interrogate the ideologies that occupy that uncertain space between text and image. 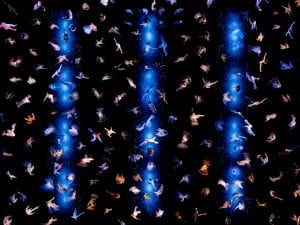 Our Aesthetica Art Prize Call for Entries Countdown continues with the Photography & Digital Art category. Today, with 21 days left to submit your work, we take a look at photographer Marcus Lyon.

Foregrounding their creative synergy, The Power of Design takes a retrospective look at design duo Charles and Ray Eames.