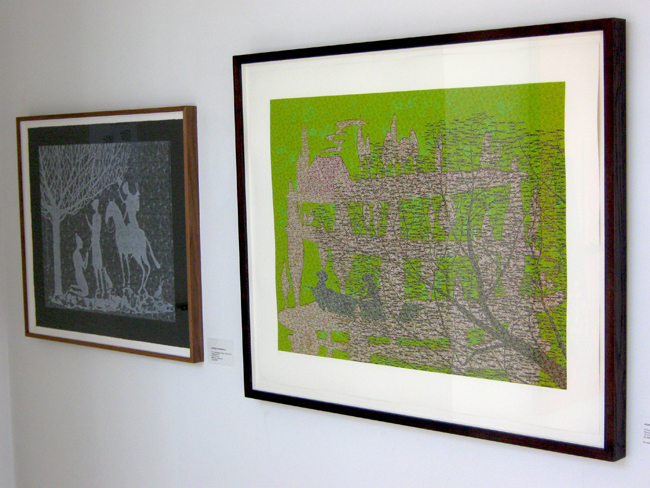 Trouble Meets Trouble and Other Recent Works is the menacing title of Stephen Chambers RA’s latest exhibition at the Wills Lane Gallery in St Ives. It refers to a series of etchings portraying characters from the world of literature, politics, history and even radio. Alone, they are highly patterned and iconic, with strong outlines, engaged in characteristic poses recalling their life’s achievements. Hung side by side, The Archers’ Clarrie Grundy, Winston Churchill, Dr Foster from the children’s nursery rhyme, Australian outlaw Ned Kelly and the Hindu goddess Kali seem to create sparks of conversation with each other and histories merge together on the white gallery wall. Chambers even paints his characteristic empty speech bubbles around some of the portraits to emphasise their inaudible monologues.

Petronella Silver, who runs the Wills Lane Gallery compares this to “a crazy .. dating game”. Indeed it is easy to see that Chambers is an artist of tremendous wit who also likes to be a bit cheeky with his viewers. The Fantasmi screenprints are keyhole views of a figure in a leafy garden, surrounded by leaves and flowers. The viewer can see them, as if through a keyholes, in quiet contemplation, apparently unaware of being observed. Chambers has accentuated the dreamy perfection of his garden with gold and the figures’ curved stances play with the busy floral backgrounds. He is giving us a ‘sneak peak’ of something beautiful and other-worldly and that is what makes Chambers’ work so tantalizingly seductive.

Other larger oil paintings and screenprints in the exhibition are reminiscent of Charmers’ earlier style, his warm oranges and indigo colours, his linear focus and use of patterning for plans and flowers.

Home of the Gentry, 2013 shows a half-built house in a charmingly desolate landscape. Beard/Speak/Turkish Finches that Chambers painted in 2006 is an iconic work, almost entirely taken up by the side of a leafless tree, painted in exquisite detail, with finches hidden in its branches and a bearded man gazing at them hungrily.

After Chambers’ 2012 exhibition at the Royal Academy, this is a not to be missed opportunity to experience his paintings in such a delightfully intimate setting. 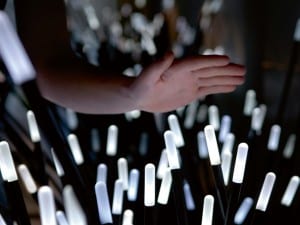 Gerald McMaster is one of the Artistic Directors of the Biennale of Sydney 2012. Along with his co-curator, Catherine de Zegher, created an event that re-examines wider narratives.

Patricia Casey works with photography and embroidery to make complex images that explore inner worlds with her series, Little Secrets. Casey believes that we all have an inner core that we do not reveal to even those with whom we are closest. 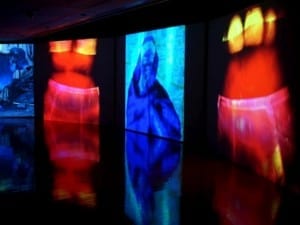 When Nalini Malani was invited to create a large-scale new media installation for presentation in India Contemporary at the Venice Biennale, her response was the enigmatic video play Mother India.