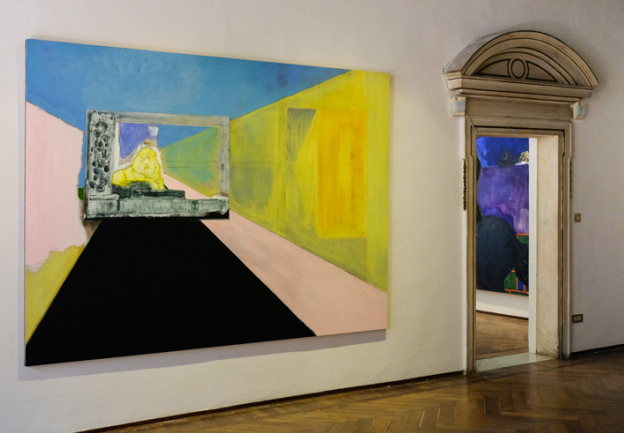 “I react to what happens during the making of a painting’ says Peter Doig; ‘this is what determines when a painting is finished for me. I have no ultimate plan, really. I want to be surprised.”  Surprise is perhaps one of the key features of Doig’s art, with paintings that feel just as familiar as they do uncanny. This latest exhibition displays an exciting experimentalism for his first solo show in Italy, with fourteen new pieces hidden within the gorgeous confines of the Palazzetto Tito, a relatively humble Venetian palace hidden around the corner from Campo San Barnaba.

The unique setting of Doig’s Italian debut appears a comfortable fit with the Surrealists and Modernists of the Peggy Guggenheim collection only a few canals away. In the past the Palazzetto has been home to solo exhibitions of Marlene Dumas and Richard Hamilton among others; it seems fitting then that Doig should now join these ranks after more than 30 years of painting. Spread throughout the first floor of the Palazzetto Tito, light streams in from open windows, casting patterned shadows into alcoves; a small spiral staircase leads up to what might be the crowning jewel in this collection – Doig’s untitled green nude, a woman, stripped back, stark lines and open face, staring bleakly out at the viewer as she emerges from a sea of green.

Doig’s paintings tell a story; they’re infused with narrative. In Spearfishing one can’t help but find a Venetian reference – the kayak, the bloodied fish, the intense blue of the water: it’s all familiar terrain. Although the canvas is small, the detail and texture fascinates, the initial stabs of colour are merely the start of a surface that reveals much more for the taking. The more you look at Doig’s work the more enchanting it becomes. Oneiric imagery permeates everything – snatches of fable, myth and legend are drawn together in new and strange ways. One is constantly searching for meaning with Doig, snatching at clues to assemble some form of cohesion in his colourful and chaotic world. Magical realism thrives: it’s like seeing a Gabriel García Márquez story come to life, with lions and people, orange and purple skins, vivid and extreme environments in which individuals clash and collide. In Rain in the Port of Spain (White Oak) a lion prowls along the exterior of a yellow building as a ghostly figure recedes into the wall behind, fading, jumpsuit and all, as if hardly there at all. Each painting rebounds with echoes and associations. This may be the greatest joy of Doig’s work: each viewer brings something new to his creations, sees something different or finds another detail to cling to, a mark to make something of: every interpretation is different.

Although Doig’s technique may feel frustrating at first – every canvas appears soft, lines blurred, the painting rushed, as if these are merely the first drafts of many things to come – it brings with it its own understated beauty. The imagery fits this gentle touch; as dreams and memories come into vivid realisation it feels natural that lines should be blurred, the boundaries between things allowed a little leeway. Doig achieves a rare feat with his 2015 Biennale offering. There is a timelessness in his paintings but also an urgent timeliness. In the opening interview to the exhibition Doig was asked why he paints, as he’s a known film fan – why not make films instead? His response was simple: “I haven’t got a film to make; I have got pictures to make.” In this humble Palazzetto the evidence of these words is clear.

Art or Sound at the Fondazione Prada in Venice

Fondazione Prada’s exhibition at the magnificent neoclassical palace of Ca’ Corner della Regina in Venice takes us on a remarkable journey of art and sound. Curated by Germano Celant. 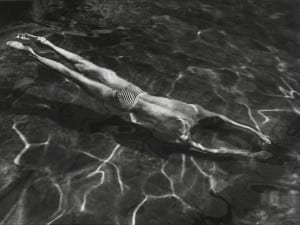 Following on from the Royal Academy of Arts’ show, Eyewitness: Hungarian Photography in the 20th Century, The Hungarian National Museum celebrates the career of André Kertész.