Review of Lawrence Weiner: Within a Realm of Distance at Blenheim Palace, Oxfordshire 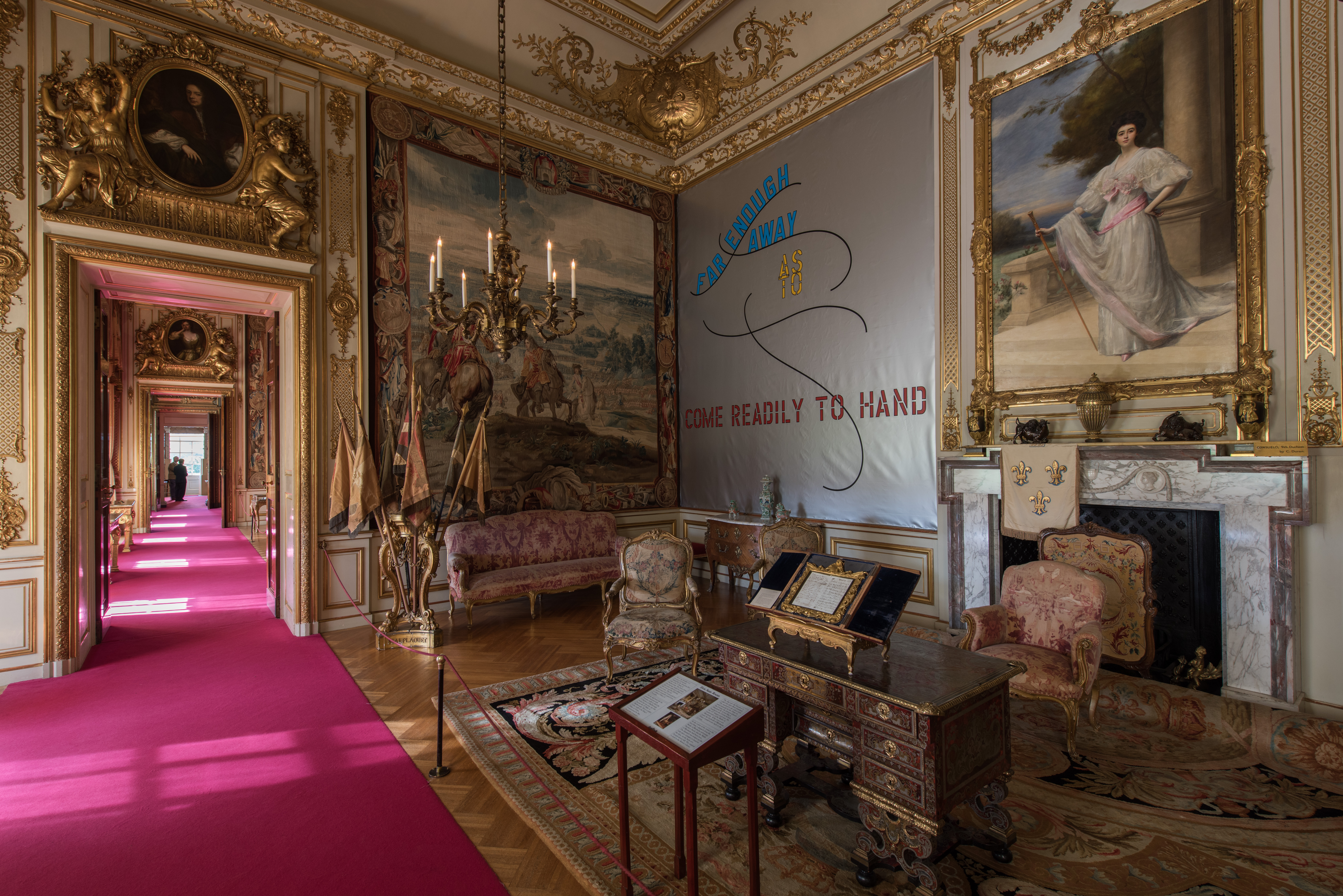 “You can have any kind of a like-for-like with people, but if you have to say ‘I love you’, you better mean it.”

Lawrence Weiner isn’t keen to put his work in context. Although he’s considered a founding figure of American conceptualism, a pioneer of post-minimalism and a trailblazer for text-based art, he doesn’t associate himself with any particular movement. Nor does he believe that the works currently on show at Blenheim Palace are site-specific – something he might not have mentioned to the curators at the Blenheim Art Foundation. Consisting of new and reformulated text works appearing unannounced throughout the palace, Within a Realm of Distance equips visitors with a linguistic toolkit for “finding their own existential relationship to the world of objects at the moment.” The fact that those objects might be victorious tapestries, priceless porcelain or Churchill memorabilia is neither here nor there. The texts are made to adapt to the needs of the viewer: the words will serve their purpose “within a realm of distance” at “any given time.”

Weiner prefers to think of his texts as sculpture rather than conceptual art, verbal constructions built from notions of space, time and physical material. Vaulting over a stone archway, the statement “NEAR & FAR & EQUAL MEASURE // AT SOME POINT”. contracts the expanse of the palace into a few brief measurements. Embroidered homilies are “FOUND […] AFTER ANY GIVEN TIME” resting on mantelpieces or hung in dark corridors. A text applied to a mirror simply states “SO FAR FLUNG”.

Other works draw upon theories of chemical change, where scientific language slips into the figurative or poetic. In the Great Hall the statement “MATTER SO SHAKEN TO ITS CORE TO LEAD TO A CHANGE IN INHERENT FORM TO THE EXTENT OF BRINGING ABOUT A CHANGE IN THE DESTINY OF THE MATERIAL”, suggests not only chemical change but alchemy; the word “lead” appears again in the Long Gallery, where text graphics installed in the ceiling cornices compare the physical properties of lead, gold, silver and aluminium. The slippery use of “lead” as both a verb and a noun suggests the mutability not only of matter, but also of language. The texts are there for the taking – if visitors manage to find the bowl of wooden coins (“BURIED GOLD”) they are welcome to take one home.

Could alchemy be the key? Weiner shrugs his wide sloping shoulders. “I don’t do metaphor.” Just like he doesn’t “do” context. However, his lack of specificity is highly precise. What interested Weiner about Blenheim was its role as a “regal palace” rather than a “royal palace”, “a realm” rather than “the realm”. Built by Vanbrugh in the early 18th century to mark the victory of the 1st Duke of Marlborough over the French, Blenheim is a baroque fantasy of the palatial rather than the thing itself. The exhibition title appears emblazoned in vast vinyl lettering above the mighty north portico, the “A” of “WITHIN A REALM OF DISTANCE” helpfully encircled to inform visitors they are now entering an ideal existing outside time and space.

Blenheim, on the other hand, seem pretty sure of their positioning as a brand. Their strapline “Britain’s Greatest Palace” was clearly dreamt up by a copywriter with slightly more commercial wit than Weiner. Nothing can fault Blenheim’s ambition. The palace was born victorious and today it is a successful business; as witnessed at Chatsworth, commercial success goes hand in hand with contemporary art. When the Blenheim Art Foundation launched last year they chose Ai Wei Wei as their poster boy, another artist photogenically out of place amid the swirling curlicues and mighty colonnades. However, it remains to be seen whether Weiner’s sibylline statements will sell as well as scones and strawberry jam. For most of Blenheim’s visitors the exhibition will be less about “a realm of distance” than simply distancing, and it will be interesting to see who the Foundation selects next. Most likely a female artist, British, with a conceptual practice based on tangible narratives. My money’s on Cornelia Parker.

Lawrence Weiner: Within a Realm of Distance, until 20 December at Blenheim Palace, Woodstock, Oxfordshire OX20 1PP. 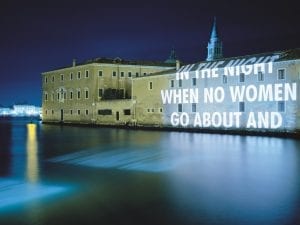 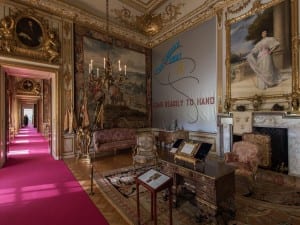 Lawrence Weiner, Within a Realm of Distance, Blenheim Art Foundation

Within a Realm of Distance will display various pieces produced throughout American artist Lawrence Weiner’s career. Known for his role in the 1960s Conceptual Art movement, the artist’s work takes the form of typographic texts.