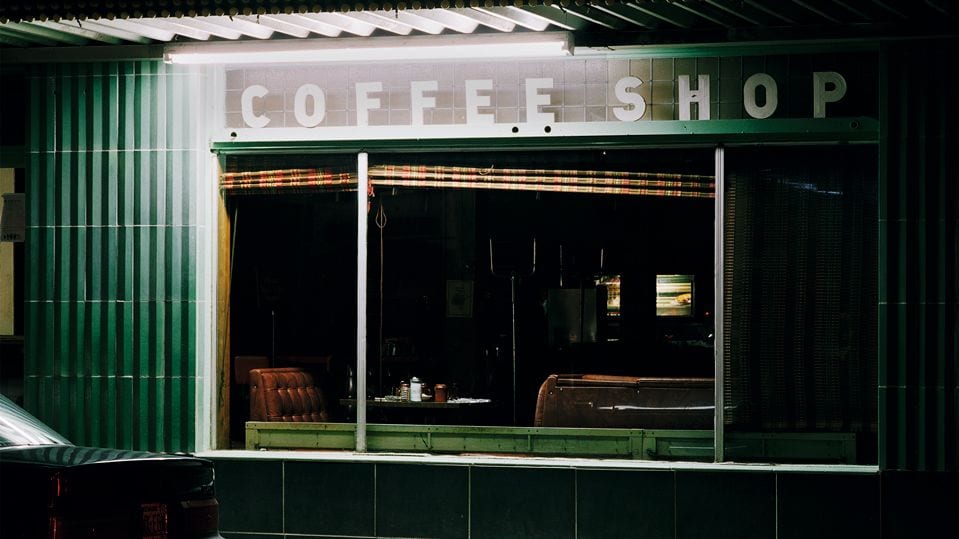 In Allen Ginsberg’s poem America, written in 1956, he personifies a profoundly individual vision of his country and performs an outlandish, incantatory interrogation of it, asking what America means, what it can be and how it can be remade. It’s a liberating poem in which the overriding sensation is of personal responsibility and agency – where America isn’t a set of values or concepts already encoded but a set of possibilities that can be enacted and a set of questions that continually needs to be posed: “America when will you be angelic? When will you take off your clothes? When will you look at yourself through the grave? When will you be worthy of your million Trotskyites? America why are your libraries full of tears?” Almost 60 years since that poem, Diffusion: Cardiff International Festival of Photography is renewing those questions and asking them through the lenses of leading international photographers whose work responds in some way to the theme of Looking for America.

Building on the success of the 2013 festival in which the focus was on Wales’s place within Europe, Diffusion has cast its vision across the Atlantic to explore not just Wales’s relation to America but what the USA stands for globally. The timing of a festival of photography focusing on ideas of contemporary America seems particularly apt. With an election approaching in 2016 and the end of the Obama years imminent, the next 12 months will be pivotal in the political and cultural development of the USA, where successes in marriage equality and healthcare reform are tempered by shocking incidents of racially motivated police brutality, a widening of the income gap and the emergence of a populist turn towards the right, epitomised by the positive polling of Donald Trump in the early stages of a bid to seal his most outrageous acquisition yet: The White House. The exhibitions in Diffusion reflect the uncertainties of this particular moment, as Ffotogallery Director and Diffusion curator David Drake explains: “Barack Obama’s election as President of the United States in 2008 offered renewed hope for the American Dream, including the promise of greater racial equality and social cohesion. Yet America remains a divided country, whose divisions Obama cannot magically heal for the very reason that American society de nes itself just as much in terms of its differences as its commonalities. The country is still at loggerheads with itself over the importance of the family, sexual mores and gun laws, conflicting ideologies and religious beliefs, between excessive consumption and exercising restraint in the use of its resources, tightening border controls or allowing freedom of movement, between waging war and brokering peace.”

Many of these challenges and tensions form the backdrop to And Now It’s Dark, an exhibition of night photography featuring three major contemporary American photographers, Will Steacy, Todd Hido and Je Brouws. Steacy’s work, in particular, takes as its prevailing atmosphere a sense of dread and fear and as its central focus the post-industrialist inner cities that have been left neglected for years. In the series Down these Mean Streets (2008-), Steacy walked at night from the airport to the central business districts of American cities taking photographs with a large format view camera. Across the images, a leitmotif of abandonment develops, from a shiny handbag on the pavement to the burnt out shell of a car at an underpass. In one particularly captivating and poetic image, Bench, Queens (2008), a partially-destroyed pavement bench is sited in front of highway blurs. Two cast iron sidings with the middle slats completely removed, this bench presents an America in which the bottom has literally fallen out. As with much of Steacy’s work, this image demands to be read politically, with the bench as a symbol associated with homelessness and its inhospitality as a comment on a ruthless neglect. As Steacy comments: “This America has turned its back on cities with no local economy, a public education system that barely meets requirements, a low income housing nightmare, few options for proper nutrition and health care as violence and drugs reign, making survival a number one priority.”

Of course, post-industrial neglect and abandon is not a uniquely American phenomenon and many British cities and towns have suffered and are suffering similar effects as a result of the decline of industry, not least the mining towns of Wales. Within this context, Steacy’s work seems to speak more universally to the requirements to regenerate, and the dangers of a heartless lack of care and social responsibility.

Todd Hido’s series Homes at Night takes a similar approach with very different results. Whereas Steacy’s aesthetic subject is abandonment and neglect, Hido explores domesticity, how humans make their homes and what that means. Titled simply by their house numbers, their four figures seeming as resonant as historical dates, his images of American houses seem at first to reveal an anonymity and monotony – his subjects aren’t architecturally notable in themselves – and yet with sustained looking, subtle variations and individualities emerge, charged with a sense of the private histories of the home’s inhabitants. In 1862, the internal illumination of the building reveals the shadow of an empty leather office chair against slatted jalousie blinds, suggesting night work. As with the work of the painter Edward Hopper, Hido’s work often feels like a stage-set in which something is about to unfold, pitched and pregnant with a sense of anticipation of being offered an opening onto or a handle on a continuum of existence. Hido’s work also articulates a sense of community: his homes at night are not isolated, they are surrounded by other homes, whether we choose to live like that or not.

Where the work by Hido and Steacy presented in And Now It’s Dark forms part of a specific series, the night photography of Jeff Brouws in the exhibition is selected from across his career. In Route 199 and 9G, Red Hook, New York (2005), a gloomy highway landscape in which either snow or thick dust seems to coat the road and the illumination of streetlamps hovers above like UFOs from a sci-fi film. While it is an empty scene, Brouws’ work often suggests human presence and inhabitation. “It’s something ineffable. Despite the lack of actual people in the images I do believe the photos are very populated. Cars, buildings, signage, and a certain quality of light (or the complete absence of it) stand in for a palpable human presence.” In this image in particular, the tyre tracks on the road give the strong impression that you’re not alone, that the journey being made is shared, even if lonely.

Brouws’ work taps into a specifically American literary and cultural history, his images suffused with some of the attitude and impulse of artists and writers such as Charles Bukowski, Raymond Carver and Thomas Wolfe. Brouws quotes as an influence on his vision of a particular American sensibility a passage from Wolfe’s novel Look Homeward Angel (1929): “There’s a terrible and obscure hunger that haunts and hurts Americans and makes us exiles at home and strangers where ever we go.” While felt estrangement may be a critical part of the American psyche, there is also something positive and unifying about America’s cultural exports, none more so than Elvis Presley, who almost 40 years after his death continues to be a potent symbol of one facet of American identity to fans around the world. In her series I Called Her Lisa-Marie (2013-15), Clementine Schneidermann documents the continuing phenomenon of Elvis mania through portraits of both Welsh and American fans. From a young boy in a satin jumpsuit and quiff wig to a middle-aged woman in a pink Stetson and fleece, the spirit of Elvis as wish-fulfilment mixes with a pervasive sadness that those dreams remain unrealised. As Drake comments, her photographs have a “melancholic undertow to the bling and kitsch. You can see the hard knocks of experience in the faces of both Welsh and American Elvis fans, but inhabiting Elvis’ world somehow enables them to invent a radiant new destiny for themselves, far beyond life’s misfortunes and its day-to-day struggles.”

Another artist whose work constitutes an exploration of the aspiration of the American Dream from an outsider’s perspective is Welsh photographer Jack Latham, whose practice combines an investigation into contemporary economic hardships with the historical backdrop of the Oregon Trail, which was the route travelled by thousands of migrants from the 1830s to 1860s to find financial success on the West Coast. Latham’s work can’t help but be read in the context of the current crisis surrounding similar journeys embarked on by contemporary migrants: the stakes in his pictures are of the utmost: and survival itself is a challenge. The photographs in his series A Pink Flamingo (2012-13) chart a route that speaks as much of hope as hardship, and reframes the history of this trail within the realities of a part of America in which levels of employment remain low and a decent standard of living remains difficult to accomplish.

Labour patterns are also critical to Hidden Presence, a strand of Diffusion that deepens an awareness of Wales’s relationship with the Caribbean. As Drake explains: “Wales, and speci cally Cardiff , has enjoyed a longstanding relationship with the Caribbean, and indeed Britain’s first significant Black community was established in Tiger Bay at the beginning of the 20th century, long before the ‘Windrush’ years of mass immigration from the Caribbean in the late 1950s, early 1960s.” For Diffusion, this story is represented by Hidden Presence, in which photographer Julien Germain documents a link between St Kitts and Chepstow, telling the story of Nathaniel Wells, “a mixed-race illegitimate son of Charles Wells, a Cardiff slave owner, who through an extraordinary series of events progressed from the sugar plantations of St Kitts in the West Indies to a position of high social standing and wealth in 19th century Wales.”

Like Ginsberg’s 1956 poem, the exhibitions that make up Diffusion both celebrate and interrogate ideas of what America is and can be. Thanks to the lens of international photography, America becomes both a continent and a metaphor through which global citizens situate themselves. As Jeff Brouws remarks, “the Earth is now one big linked social experiment”. Diffusion reveals the “America” in all of us, the portion of ourselves that is made of social and cultural aspirations and the conflicts and tensions that we face. 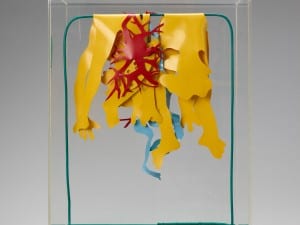 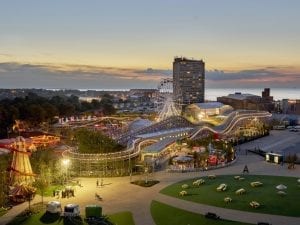 Daniel Webb collected all the plastic used in a year – around 4500 pieces, of which 93% wass single-use packaging. 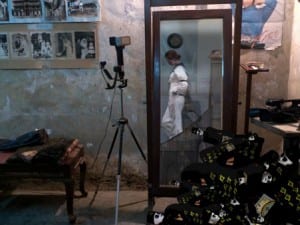