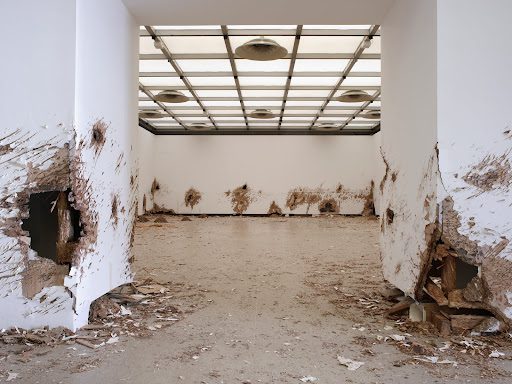 Venice is the biggest date in the art world diary and Mike Nelson’s installation, conceived and created in the British Pavilion is no different. Nelson has been working in Venice for a period of three months and the completed work was launched to the press on 1 June and will be open to the public for the duration of the exhibition from 4 June – 27 November.

Born in Loughborough in 1967, Nelson has already received considerable international acclaim for his meticulous installations and his work has been presented in major group and solo exhibitions throughout the world from the ICA (London), CCA Wattis Institute for Contemporary Art (San Francisco) and at the Statens Museum for Kunst (Copenhagen). A recipient of Paul Hamlyn Award in 2001, Nelson has twice been short-listed for the Tuner Prize. One of his large-scale installations, The Coral Reef, originally convceived for Matt’s Gallery, London (2000), was acquired by Tate in 2008 and is currently on show as part of the Collection Displays at Tate Britain.

Nelson’s large-scale sculptural installations immerse the viewer in an unfolding narrative which develops through a sequence of meticulously realised spatial structures. The weaving of fact and fiction are fundamental to Nelson’s practice, and his constructs are steeped in both literary and historic references, whilst drawing upon the geography and cultural context of their location. Throughout his career, Nelson has constantly returned to and re-examined territories within his own practice, and his new exhibition for the British Pavilion follows the success of his first major solo presentation in Venice in 2001, The Deliverance and the Patience, which was shown as part of the collateral programme at the 49th edition of the Biennale.

Nelson’s, I, Imposter takes as its starting point another of the artist’s key works from the past decade, Magazin: Büyük Valide Han, originally build for the 8th International Istanbul Biennial in 2003. By relocating and re-working this earlier installation for Venice, Nelson has both created a link between the two former great mercantile centres of the east-west/west-east axes, and drawn upon his own histories with the cities and their respective biennials.

Magazin: Büyük Valide Han was housed in a cell-like space within the vast complex of the Büyük Valide Han, a 17th century caravanserai situated in the Mercan area of Istanbul. It comprised a darkroom on split levels filled with black and white photographic images of the courtyards and dome structures of the exterior of the caravanserai in addition to the immediate surrounding area of the building. Nelson has referred to the work for Istanbul as being a parasitical installation that had lodged itself into a 17th century building. Based on the photographic memory of the earlier work, with I, Imposter, Nelson has not only rebuilt the original darkroom but sections of the caravanserai itself, so that now a building, from another time and place, exists inside the late 19th century British Pavilion in Venice.

The British Pavilion is open to the public until 27 November. Keep an eye on their Twitter for up-to-date information on queues and opening times: @BCVisualArts 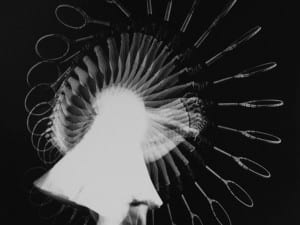