Kourtney Roy (b. 1981) began her career with the intention of becoming a painter. However, after taking a photography course she quickly found a passion for the instantaneous nature of this art form, enjoying being able to immediately capture a scene as it was unfolding. Having featured on the cover of Aesthetica for two issues, we catch up with her about her most recent photographic series, Northern Noir.

A: In your new series, Northern Noir, your works have a cinematic quality, where houses can be places of unforeseen events and fields settings for unsettling narratives. Could you talk about how you transform the everyday world into one of imaginative captivation?
KR: I tend to combine two methods of image making when I am working. There is one aspect of the work that relies on the vagaries of chance, using random places and situations that I come across in my wanderings as sets for my images. This leads to the second aspect, which is a more mise-en-scene, narrative approach, where I have storyboarded and organised ideas, scenes and potential situations that I could possibly apply to the random settings that I come across. All places are latent sites where events may have taken place. I try to emphasise this ambiguity of being. It’s a way to see the world as a perpetually unfolding story. There is always a narrative within a narrative, I search to illuminate the anecdotal within the larger story.

A: How do you think your photographs heighten a sense of dread, or clandestine occurrences in almost banal scenery? How do you think you create a sense of unease in the viewer?
KR: I remember reading a while ago a bit of Lacanian theory applied to Hitchcock, and how houses and structures can add a dimension of voyeurism to a scene, that the presence of windows can suggest the presence of an unseen observer. I found this idea fascinating, that the lack of an observer can give the effect of being observed. I have often felt this when alone, I could be walking in a forest, or in my house, the basement door open behind me, and an unsettling sensation of being watched, unaware, descends. With photography you have the ability to heighten this sensation that is both disturbing and fascinating. The camera is equally unseen observer and unwittingly observed.

A: How far do you think that your work is a magnifier for the human imagination? Do you think that successful photography perpetuates the ideas we have in our minds and help to construct a narrative with them?
KR: I don’t think there is really any formula for a successful form of photography. I have the propensity to use the camera as a way to manifest the tiny worlds inside my head. Photography’s link with the “real” is possibly what makes it so intuitive and mysterious (and dangerous). But it is such a contentious and ambiguous medium that for me to proscribe to it only certain forms of image making would be naïve and insular.

A: It’s interesting that these photographs were taken on several road trips; alongside the familiar iconography of the American Open Road, how do you think they operate with the viewer in terms of evoking memory and a sense of a metaphorical journey?
KR: I love North American iconography of the Open Road. It is also a very common way I tend to make my work as I often I spend endless days driving, watching the landscape, looking for random details that catch my attention, asking people in bars and roadstops about the local terrain and sites.  I try not to give my work a metaphorical slant, I am trying to operate on various layers of potential signification; collective memory, subjective experience, simulated memories of the screen, the TV. Each person’s experience of these things is so particular that there is really no correct reading of the work, there is no meaning, except what we project on to the work, which I find both beautiful and perfidious. But Beauty is often more so because of the menace lurking underneath.

A: Your works feature identity and place as key themes, fixing a specific action or emotion in a single point in time. Do you think that the series comments on past and present and how they can, perhaps, be combined? For example, do you think your works comment on how a place can be at once seeped in memory, but can also have the possibility to be re-written with new ones?
KR: I think that is part of the magic of film, whether still or moving, is its ability to have an effect on personal memory. There is a layering of experience on places and images. There is no singular narrative, but a multiplicity of narratives interacting and influencing each other. It is impossible to escape one’s own subjectivity, it tinges the present and colours it at each moment. The present is only experienced through the past, the two are inseverable from each other.

A: Following on from these ideas, it’s interesting that this series adheres to your technique of auto-portraiture and using yourself as the main protagonist. Could you expand on how this comments on the fragility of self-recognition?
KR: I often use myself as the protagonist in my work as a way to enact out the endless possible stories in my head. It is a way to give life to all the potentialities that one could be, a form of self- projection onto (or into) the world around us. The photograph is a way to capture these various facets of the self, a way of stabilizing and fixing what is in continual motion and flux. There is also a sense of play in this form of photography, a performative element to it, as well as a dark humour. Perhaps it is a way to explore the darker side of oneself.

A: These self-portraits rely on a certain element of chance; using methods of improvisation, the vignettes are spontaneous and perhaps comment on the sense of possibility. Why do you think this is important in this particular series?
KR: In Northern Noir I was greatly influenced by the film still and the idea of the cinephiliac moment, which are small, fleeting moments one experiences while watching moving images that induce intense feelings in us for very personal and intuitive reasons. I tried to bring this idea of capturing and singling out the randomness of the details around us, and how by choosing one detail over another brings some form of meaning (or non-meaning) to an otherwise mundane scene. Much of the work in the series are places that I came upon by accident, and they are very common places; the side of the road, a parking lot, a field, a truck stop… I was watching some films by Melville before I started this series and I was struck by the utter grey “nowhere-ness” of his sets, often just a car in the middle of field, unremarkable forests, random garages and alleyways. The extent to which potential narrative and mystery could be ascribed to these places through the camera was fascinating; you can create so much ambiguity with so little. 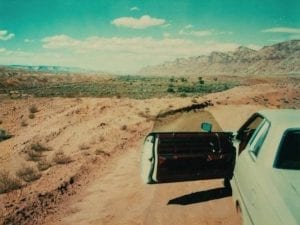 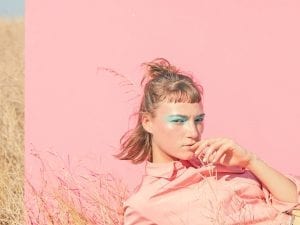 Filled with abandoned roads, scattered flowers and brilliant skylines – Western Cape and WHiT NY are amongst the latest colourful series by Jimmy Marble. 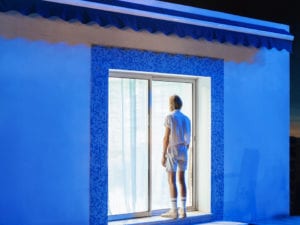