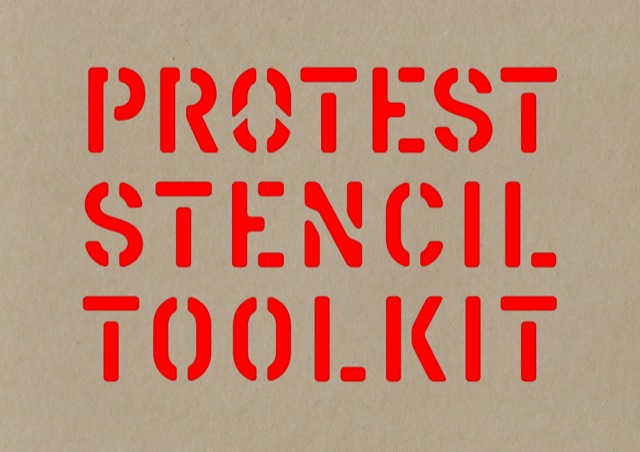 Barcelona-based Patrick Thomas, has created the essential toolkit for the graphics of protest. This comprehensive book contains 46 die-cut stencils and a stencil typeface that can be used to create slogans and visual messages. It’s tempting to go straight outside and start marking your territory, however there is a wider message at play here.

Over recent years, street and guerrilla art has become increasingly popular and rather than being considered destructive, it has taken on a new meaning in our contemporary landscape. Taking a significant step towards the democratisation of the practice, David Cameron chose to give Barack Obama one of Ben Eine’s typographic works; an artist known for using the underpasses, bridges and train carriages of south London as his medium.

Protest Stencil Toolkit builds upon this relationship between stencil art, social consciousness and bringing art to a wider audience. We can’t all be the next Banksy or Blek le Rat, but with this book of classic symbols from great protest movements as well as new images reflecting contemporary concerns – we can certainly try.