Somerset House invites audiences to reflect on their commonalities and shared experiences through a programme aptly titled I Should Be Doing Something Else Right Now. The London-based centre is recognised as being home to a vibrant community of artists. Now, it invites visitors to join in virtually – to take part in live streams: to read, listen and, most importantly, pause. As part of this, creative practitioners have been sharing their work online as part of Transmissions – a weekly commissioned platform taking a DIY TV show format – as well as responding imaginatively to the title of the programme, thinking about indoor productivity.

Over the next few weeks, Somerset House blends a variety of disciplines and formats whilst dipping into the archives. Examples of this include a re-appraisal of Malick Sidibé’s (1935-2016) photography – which was the subject of a physical exhibition in late 2016. The show highlighted images of modern Mali from the 1960s and 1970s, which are defined by a sense of youthful energy. Now, inspired by his work, DJ, presenter and African music expert Rita Ray presents The Sounds of Bamako. The talk celebrates the eclectic songs played in clubs and parties across Mali’s capital – the very locations captured in Sidibé’s black and white images. Ray offers a selection of tracks whilst discussing the stories behind the compositions. The summer arts programme also has music at its core: Imran Perretta’s Listening Party with Paul Purgas (28 July) brings artists together to meditate on the aural influences that have shaped their identities.

Phones, computers and social media are being used now more than ever – they are what keeps us connected. Somerset House looks further back to 1968, when internet pioneer Douglas Engelbart demonstrated key elements that would shape modern computing. Mother of All Demos, launching 6 July, commemorates this moment through talks and films. It is complemented by Defrag, a brand-new podcast  – launching 21 June – that investigates the role technology plays in the development and consumption of art.

Looking to the future, initiatives such as Upgrade Yourself: Peer Exchange offers digital sessions for young people aged 18-30 looking for routes into the creative industries. Set against a backdrop of remote working and self-isolation, it explores how to build skills in virtual spaces – inspiring the next generation’s resilience and adaptability.

Upcoming speakers include Akil Benjamin, of design studio COMUZI, who presents a workshop on developing a practice and a variety of revenue streams – transforming visions into reality. Other speakers include Eloise Hawser, a research-based artist interested in the emotional impact of architectural, mechanical and electrical infrastructures. She unearths that which is hidden in the landscape – revealing how urban design shapes collective existence. 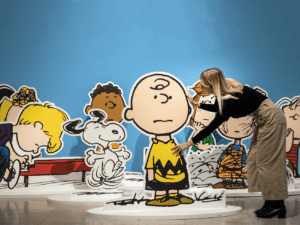