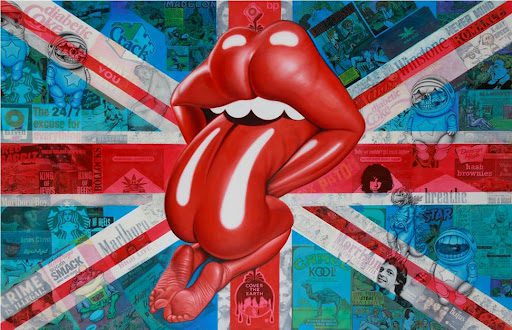 Review by Mallory Nanny, a candidate for the MA in Art History at Richmond the American International University in London

In his first UK exhibition, entitled Skin Deep: Post-Instinctual Afterthoughts on Psychological Portraiture, contemporary artist Ron English bridges the gap between high and low art by incorporating mass produced, low brow imagery into traditional high art subjects. Portraits of historical icons like Marilyn Monroe, Ben Franklin and George Washington coexist with those of pop culture characters, Fred Flintstone and the Hulk in this exhibition. English builds each composition using vintage advertisements and cartoon imagery, some of which are found material that he enhances with paint, while others he illustrates in meticulous detail.

The artist reinvents the devotional image of the Madonna and Child by replacing the former with a human-cow hybrid. The seated female nude has the bodily attributes of a woman, but sports a feminized cow’s head. Her two breasts have lost each nipple, but have gained eight teats. The Madonna is posed cradling a peculiar, magenta-coloured version of the infant Christ who desperately tries to latch on to one of Madonna’s udders. The cow, a popular motif repeatedly used by the artist, is now elevated from farm animal to sacred status. While the supernatural green and blue shadows underscore her holy rank, the collaged backdrop of vintage comics and a 1950s brassiere advertisement brings this surrealist, yet high art totem down a notch. Some comic titles read Cowgirl, and Moon Girl, two strong female superheroes whom English may subtly relate to his hybridized Virgin Mary. While the viewer’s interpretation of this work may result in a rather ambiguous reading, the artist’s penchant for using comic illustration proves less satirical and more complex throughout the course of the exhibition.

Throughout his career, English has repeatedly appropriated Picasso’s Guernica (1937), a subject he regards as a contemporary model in art making. The painting that is currently installed at the Lazarides gallery contains skeletal portrayals of the original characters, each reproducing their long-standing gesture of war-torn trauma. Similar to his other work, English embeds other material into the background of this piece as well. A bar of photographic transfers depicting a bird’s eye view of a cityscape stretches across the lower third of the painting. The middle and upper areas are consumed by colourful comic images that English has muted by repainting them in black and white paint to fit the traditional greyscale scheme of the iconic image. He even affixes a photographic portrait of Picasso into the middle section as a way to commemorate the modern master. Lastly, a thin bar of clouds expands across the top of the painting. While the lower and upper areas of the painting seem to suggest the high status of Guernica in the art world, the mass media references would seem, at first, to remove that status from English’s contemporary variation. However, as some of the cartoons included are extracted from the Superman comic series, English most likely makes a statement regarding the glorification of violence in western media. He alludes to the product placement of our globalized marketing culture by treating war as entertainment and entertainment as war.

While the artist shows an obvious inclination to recreate art historical totems, he similarly appropriates pop culture images as well, seen in his innovative take on John Pasche’s iconic Rolling Stones Tongue and Lips. Placed in the centre of the composition, the tongue becomes a human back with legs added underneath. The upper lip is transformed into a figural buttocks and thighs which descend downward into calves. Traditionally, this would have been viewed as the lower lip, yet the plump red shape and white highlights of Pasche’s original still remain to show a striking resemblance. Surrounding the emblem is a rich collage of popular advertisements that have been altered, such as diabetic coke. Ads for fast food, tobacco and marijuana cigarettes merge with images of 1960s musicians, calling to mind the testimonials and trickery that are common in advertising. Because the teeth are still present in English’s revamped lip and tongue logo, he seems to insinuate that our consumption of mass media has actually reversed, and mass media has grown to consume us instead. This is particularly evident in his inclusion of an environmentally-charged sign that reads ‘BP covers the earth,’ which is accompanied by a BP can pouring oil over the planet. The instantly recognisable fonts and logos of English’s altered brand imagery not only signifies the prominence of these products and images in our globalized economy, but also how it is universally understood among the western public. Although his combinations of consumerist references are often complex, they collectively provide insight in perceiving the bigger scope of his art.

Ron English: Skin Deep: Post-Instinctual Afterthoughts On Psychological Portraiture is on until 23 July.

Aesthetica Magazine
We hope you enjoying reading the Aesthetica Blog, if you want to explore more of the best in contemporary arts and culture you should read us in print too. In the spirit of celebration, Issue 41 includes a piece on Guggenheimn Bilbao where the Luminous Interval features internationally acclaimed artists such as Louise Bourgeois, Kiki Smith and Damien Hirst, ArtAngel‘s new commission at MIF, Bruce Nauman’s retrospective at The Kunsthalle Mannheim and Cory Arcangel’s Pro Tools at the Whitney in NYC. You can buy it today by calling +44(0)1904 479 168. Even better, subscribe to Aesthetica and save 20%. Go on, enjoy! 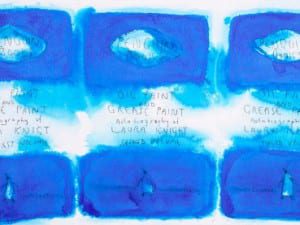 Review by Mallory Nanny, a candidate for the MA in Art History at Richmond the American International University in London In his first UK exhibition… 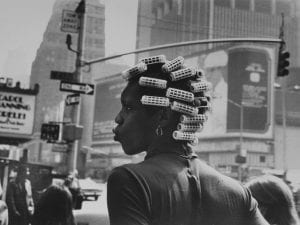 Neil Libbert has been working as a street photographer for nearly 60 years; Michael Hoppen Gallery offers an opportunity to see the full range of accumulated works.