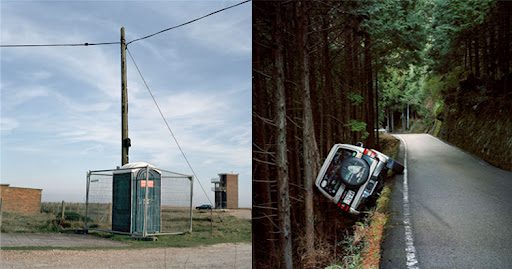 Review by Kara Magid, a candidate for the MA in Art History at Richmond, The American International University in London.

Peter Marlow’s Point of Interest photography exhibit is on view at The Wapping Project Bankside gallery from 24 May – 2 July. The Wapping Project Bankside is a gallery focusing on lens-based media founded by the Director of the Wapping Project, Jules Wright. Marlow joined the gallery in 2009 and the site provides Marlow’s photographs with a generous amount of space in which they can truly flourish. The first photograph we encounter when entering the exhibit is of a shopping cart left astray in a public space. This large-format image allows for the viewer to ingest each detail and also to get a feel for the wide expansive space in which the shopping cart has been positioned. Because this photograph is not in black and white, it resembles a scene we might pass by while taking a random walk outdoors. Most of Marlow’s colour photographs first seem like visual documents of mundane life but as one makes their way through the exhibit, it becomes clear that this is not Marlow’s intention. What he is attempting to do is to capture instances of abandonment in which various objects are the victims. No longer is the solitary shopping cart a commonplace object but a trace left behind by reckless human behaviour.

This idea of abandonment is pushed further by the flooding surrounding the cart and under which it is submerged. Marlow’s photographs display how something that once served a particular purpose can easily be left behind. He is particularly good at presenting this theme by placing objects in contexts that do not relate to them whatsoever. In this way, Marlow’s photographs also completely deny our expectations. Whilst we expect to see a shopping cart in front of a grocery store – the fact that it is submerged under water allows it to be reconsidered by the viewer. The shopping cart has no purpose in the context of this photograph. By calling attention to context, Marlow brings up an important point – that context is extremely relevant in viewing contemporary photography.

The theme of abandonment reoccurs in different forms throughout the space of The Wapping Project. In a large format, colour photograph entitled Empty office in Clerkenwell/England (2002), Marlow captures the interior of an abandoned office space. In this image, light comes in from outside on a sunny day and presents itself on the floor, emulating the shape of the window through which it enters the room. This white-washed lighting provides the photograph with a sense of serenity, emphasizing the potential vulnerability that might be experienced by a thing if it is to be abandoned. What is left behind in the interior of this image are telephones no longer supported by desks and so they find their place on the floor. Because all of the telephone receivers are hung up, it appears as if their purpose has been discontinued. Ironically, the design of the telephones is reminiscent of older models and this only seems to drive the point home that these objects have been abandoned and will also soon be replaced. Once overused and talked into by humans – in this photograph, they have become entirely forgotten. Here again – Marlow makes us aware that something once serving an important purpose can become something that no longer has one at all. By presenting us with an office space, he also challenges our expectations. Who would have thought, that in the context of an office space where communication is pertinent, the means of this communication could become obsolete?

By capturing a variety of different locations and spaces, Marlow reminds us that no place is safe – instances of abandonment can occur anywhere and they are not just experienced by people. People, in fact are nowhere to be found in Marlow’s photographs. Besides for Marlow himself, the only references to human life are represented by the traces they have left behind. These traces range from human footprints, dug up holes in the dirt, or the careful assemblage of Lego people and their accessories. In Marlow’s photographs, humans have projected themselves onto objects and modified locations and then in the next breath, they have left these things behind. This is as if to say an object or location is only significant when it is being altered by human life. By visiting The Wapping Project Bankside gallery, one can view these powerful statements communicated by Marlow through his photographs.

Importantly, the exhibit is not limited to colour photography but also includes ten smaller black and white images. Finished in gelatin silver – they are dazzling prints mounted on museum board. Not only can Marlow present his viewers with significant themes – he can also employ this theme whilst also experimenting with different media and techniques. In a black and white print from 1996, the subject is a disused coal mine which later became the location of an Earth Centre. The context of this image is Doncaster, England and the replacement of the coal mine by the Earth Centre is emphasized by the detail Marlow has chosen to capture in this photograph. He does not simply take a shot of the Earth Centre as it stands today but shows the way in which concrete now covers and discontinues a route that once lead to the now obsolete coal mine. Because coal mining was once largely practiced in Doncaster and is no longer important today – Marlow again shows how something can lose its significance once it is befallen by change. In at first appearing ordinary and subtle, Marlow’s images actually capture the essence of changes that have taken place in particular contexts. By presenting us with locations that were once occupied but today are abandoned, Marlow makes us consider the stability we might assume something to have. Perhaps everything at some point will become victim to abandonment. This exhibit is a good reminder of what photographs can do, capture the fleeting nature of appearances.

Aesthetica Magazine
We hope you enjoying reading the Aesthetica Blog, if you want to explore more of the best in contemporary arts and culture you should read us in print too. In the spirit of celebration, href=”http://aestheticamagazine.blogspot.com/2011/04/aesthetica-aprilmay-issue-40-out-today.html”>Issue 40 includes features on James Turrell, Wim Wenders, sculptors Alice Anderson and Kate MccGwire plus an extended feature on the Making is Thinking show at Witte De With Center for Contemporary Art in Rotterdam. You can buy it today by calling +44(0)1904 479 168. Even better, subscribe to Aesthetica and save 20%. Go on, enjoy! 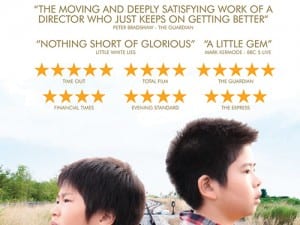 Following successfully in the footsteps of such masters as Yasujiro Ozu, Hirokazu Kore-eda rejects action and relentless pace in favour of quiet family drama.