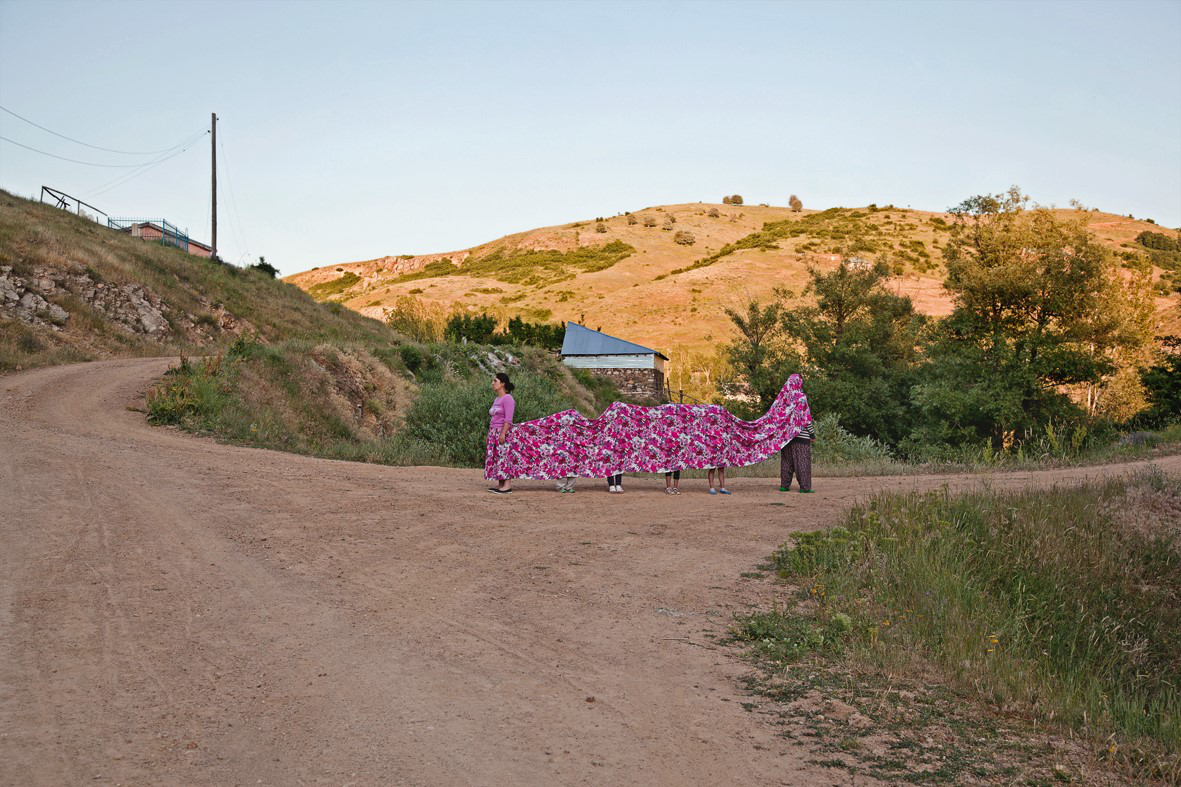 The 10th edition of Contemporary Istanbul showcased mostly large-scale works in vibrant hues for a relatively new and growing market of buyers in Turkey. Resembling a bazaar of bright decorative items, paintings of landscapes, colorful portraits, mosaic interiors, embroidered animal shapes, lenticular photo collages, sculptures of a woman in a bathing suit, and sundials made of black umbrellas lit up the fair. Yet, embedded in its midst were some emerging and major artists whose innovative forms, techniques and ideas displayed fine art for serious collectors intent on scoping out unusual talent.

Taking on a feminist stand, Nilbar Gures’ photographs and paintings at the Rampa Gallery, Istanbul, challenged patriarchal traditions in her homeland. In Ortu-Etek-Colth-Skirt, 2011, Gures’ performative photograph of two women and four children wrapped in bright pink flowery fabric concealed the duties of domestication while ostensibly aestheticising its outward appearance.  Shot against the stark rural landscape of her mother’s home, the lonely tediousness of women’s lives was made apparent. Placed next to Duserken/While Falling, 2011, Gures’ mixed media painting of surreal heterosexual creatures suspended from fabric air balloons provided a fantastical release into a free-spirited world.

Sukran Moral’s provocative images from her well-known performances that began in the mid 90s were perhaps the most bold and irreverent representations of role reversal in Turkey. Viewed at Galeri Zilberman, Istanbul, Marriage with Three, 2015, captured Moral’s farcical commentary on forced arranged marriages in her country by her impromptu alliance with three strangers in Rome where she resides. The gold plated cast of her vagina in Artist’s Pussy, 2015, forcibly made one confront issues of repressed sexuality. Although President Recep Tayyip Erdogan’s aggressive effort to curtail freedom of expression is widespread, Moral’s detracting stance on female suppression and pervasive patriarchal norms seemed unimpeded.

Transformative pieces also appeared through a project that resuscitated interest in architecture and history. For emerging artist Eda Soylu, shown by Berlin Art Projects, fresh flowers inserted in cement pods and hung on walls in old dilapidated buildings became icons of hope in her installation titled Wallpaper, 2013. Photographs of these installations that combined the delicacy of real flowers with cement highlighted the fragility of memories associated with old forgotten structures and gave impetus to the idea of historical conservation.

Azade Koker realised innovative sculptural forms in her concurrent solo exhibition at the Elgiz Museum in Istanbul titled Entkettet – Dissolution. An enormous industrial chain made of Japanese paper wrapped in gauze hung from the ceiling and an uprooted tree, also made from fabric, dangled in the middle of a room. The tactility of each piece evoked contrasting qualities such as heavy and light, soft and hard, permanent and perishable, exploring what the artist described as “the chain of life and the chain of thraldom.” Koker’s sculptures pointed to the difficulties of human relationships and social inequities especially with the current refugee crisis, and the aimless destruction of nature for increasing urbanisation.

Inspired by Titian’s classical paintings, Turkish artist Mehmet Guleryuz’s impressionistic rendering of the slaying of the satyr Marsyas in Homage to Titian Marsyas II, 2015, at The Empire Project, captured the frenzied energy of Titian’s canvas through his lively color palette and textured impasto brushstrokes.

Works by Etel Adnan and David Hockney at Galerie Lelong from Paris, and the Romanian sculptor Catalin Badarau’s (represented by Nasui Collection & Gallery) lifeless, distorted silicon head contributed high standards to the fair.  Equally enticing were American artist Zio Ziegler’s colorful paintings influenced by aboriginal and graffiti art. In the Iranian focus section Barbad Golshiri’s tombstone sculptures and Naseer Bakshi’s boxes of suppressed memories brought a political edge to the event. Even if one were expecting more rigorous, politically motivated art, some artists in the fair had clearly found their mediums and languages, giving hope to the notion that Contemporary Istanbul would eventually morph into a venue of fine art, in keeping with the founder Ali Gureli’s desire for the fair to be known for its international standards.

The 10th edition of Contemporary Istanbul took place from 12 – 15 November 2015 at venues across the city. 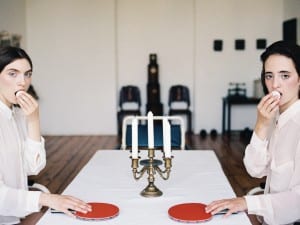 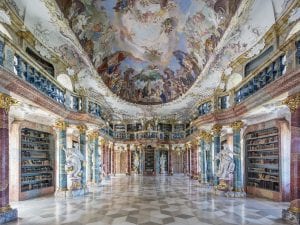 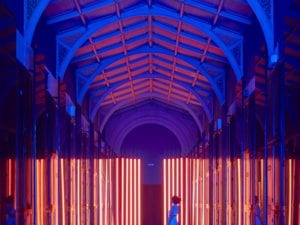 The London Design Festival is an epicentre of global design, covering London with exhibitions, installations, bold architectural design and art.