New Symphony, an exhibition of new works by four leading sculptors opened last week at the Simon Oldfield Gallery in Covent Garden. Artists Tim Ellis, Katie Cuddon, Sam Plagerson and Douglas White are known for their interest in and examination of our contemporary culture and the objects within it, which is a topic that you may have read something about in our April/May issue with the “Popular Culture and the Aesthetic Discourse” feature. So, individually, each artist displays a widely differing perception of the world and their interests and approaches differ enormously, swerving from the nature of fame and its constructions, to the complexities of the human psychological condition. I find it incredibly interesting when a group show deliberately clashes ideologies, concepts and worldviews – it makes the art come alive, ultimately invigorated with debate.

As a group, their work in this exhibition casts a view on humankind’s perception and representation of the self. Having trained in a ‘post-YBA’ environment, these artists do not use shock as a tactic with which to make a point but reference instead a wide web of ideas – both visual and conceptual – with which to tease a response from the viewer. They also frequently make use of appropriation, as a means of taking something from its familiar and accepted circumstances and placing it in a fresh perspective, where it can be considered anew. New Symphony questions notions of authorship, identity (on both a personal and societal level), value and beauty, and as such presents insights into one of the main discussions within British art and society today.

This is a theme running throughout the current issue of Aesthetica, we are interested in unpacking these ideas, looking about identity formation, and appropriated meaning. Cover artist, Sean Raggett explores these same concepts in his works:

Details about each specific artist below:

Tim Ellis examines how mankind chooses to represent himself through the cultural artefacts commonly seen in homes and everyday surroundings. His practice revolves around the idea that a being has a primeval desire to want to belong to something greater than oneself. This ‘wanting to belong’ is manifested in both the production and consumption of cultural artefacts. Whether in isolation or as a collection, artefacts are dependent on a creator, mediator and audience: Ellis explores the meanings behind many of these objects, taking and reestablishing them in a new context that in turn questions both their value and their original purpose. In doing so, and by allowing the relationship between the original and the ‘new’ to be made manifest, he highlights furthermore the tensions between historical fact and fabrication.

Katie Cuddon has worked across a range of media but primarily makes drawings and painted clay sculptures that frequently represent what seems to be a ‘detritus’ of the human body as representative of its psychological conditions, following in the same classical tradition as for instance Hans Josephsohn. Texture and colour jostle with each other, each vying for a role that both describes and conceals her work, as pummeled and kneaded surfaces and semi-recognizable forms are whitewashed over, swathed, and bound-up within themselves. Cuddon’s ‘takings’ of the human body elicit a series of semi-conscious responses in the viewer that are felt far more on an emotional level than one that can immediately be explained. Combined with this seeming serious, shy and corporal approach, the subject matter of her works frequently steps into a realm of dark humour, tempered by the Surrealistic love of game playing that merges (for instance) the public with the private, as in Cock Microphone.

Sam Plagerson is particularly interested in the ideas of Edward Bernays (the ‘father’ of public relations and advertising). His forthcoming body of work to be exhibited at Simon Oldfield Gallery is wholly derived from publicity and fashion imagery. To date, perhaps his best-known work is Elle, a ceramic bust portrait of Jennifer Lopez, painstakingly detailed and perfect in every sense. Plagerson’s practise explores how images control and affect their viewer, aiming to induce a reappraisal of imagery that has become over-familiar and banal. By specifically investigating the magazine crop (by transplanting these highly edited and perfected images into three-dimensional form) Plagerson unpicks the depicted gestures and expressions, allowing the viewer to see and understand the construction and arrangement of the images themselves. By deconstructing – and thus removing – the usual frames around such images, the viewer can focus on information that is not normally registered, such as how the image has been cropped and created for mainstream consumption.

Douglas White works frequently with found objects. Finding beauty and mystery in things most people would ignore, such as an exploded tyre or the root system of an upturned tree. His works are imbued with a poetry that speaks of an alchemical transformation of ‘base’ materials into something new, beautiful and worthwhile, and they pulse with a new energy. Tapping into ideas of renewal and rebirth, White’s sculptures, installations and drawings offer a means of possible salvation from man’s destructive presence upon earth, while his inspirations and subject matter are frequently based on myth, referencing (for instance) the ancient Greek myth of Icarus, poetry, or the native American Indian dream catchers that catch the nightmares and protect sleeping children.

The gallery has also commissioned a soundtrack in response to the art and concept of New Symphony. I am completely enthralled by this interdisciplinary approach.

Images © the artist at courtesy the gallery 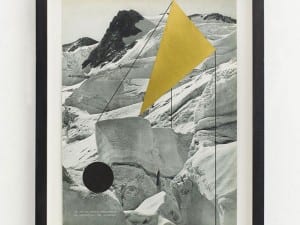 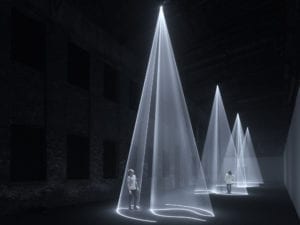