Nathan Coley: A Place Beyond Belief at Haunch of Venison, London

Nathan Coley, Turner prize nominee in 2007, is exhibiting in the plush, society spaces of The Haunch of Venison’s New Bond Street premises. Though the walls are white, the high ceiling, polished wooden floor, and extravagant marble stairs speak of the luxurious Mayfair surroundings.

The exhibition’s title, A Place Beyond Belief, is hung on a three-tiered scaffold, in the central of the three downstairs gallery spaces. The words are assembled in light bulbs, simultaneously an advertisement for a West End musical and an evangelical proclamation. In 2006 a similar sign of Coley’s read, “There will be no miracles here”. This quote, “a place beyond belief” is taken from a New Yorker, riding the subway post 9/11. With knowledge of its origin the religious overtone is dispensed with to make way for something altogether more baleful.

Placed centrally in the next room is Choir. The piece is composed of eight blank demonstration placards, held aloft in the gallery space, facing the doorway, silently protesting to the viewer in the threshold. The placards, diminished in size, are made from white-painted steel. Beneath the expectant surfaces, their short poles don’t extend the jaunty angles of the sign-faces, and quickly lead to flat metal bases. Sitting atop a cardboard covered table (an indicator of their native material), the placards seem bizarrely unimpressive, unanimated without bodies beneath them. They symbolise noise and fervour, but instead provide a reflective stillness.

Wall mounted black and white photographs of protesters surround the table-based sculpture; this time there are bodies with the placards. Their banners, flags, and in some cases, whole figures are blanked out, the words and actions covered over. The act would seem a criticism of the homogeneity of protest, a denial of its means, but the material concealing the images is gold leaf. Rather, this is a sort of anonymous demarcation and celebration of the expression. The photographs are given the title, The Honour Series. The ubiquitous forms of demonstration given pious presentation.

Upstairs is a makeshift graveyard. Just as the words on the placards had been covered, so too the tombstones are censored. Messages “dearly beloved” remain, but names have been removed. The stones are propped against the walls, leaving the expansive height and central space of the room empty. The empty area somehow removes the charge from the stones. A room full of gravestones should also be full of ritual, but just as the choir of placards downstairs seems to have lost its substance, the tombstones are stripped of their allusions. Perhaps this is more of a gravestone-store than a graveyard.

The exhibition makes frequent use of the anonymous and unattributed, which can so easily become a representation of the universal. One protester becomes a signifier of all protest, and one gravestone a symbol of all similar ceremonies. With references to the objects and acts of ideology (political or religious); choirs, placards, tombstones, and demonstrators, Coley begs the viewer to question. Why is such import attached to these objects? At what point does carved stone or marked cardboard become loaded with personalised and abstract, sometimes transcendental, significance?

Another piece consists of three simply composed, large-scale, works on paper. At the bottom of each piece, in graphite, is the same text, quoted from a Guardian news piece covering the Hackney riots. It mentions an oft-cited African proverb, “If the young are not initiated into the village, they will burn it down just to feel its warmth.” In each case a photographic image sits above the text, complete with a Wikipedia URL. A picture from Florida’s everglades finds itself adjacent to the Tate Modern building displaying a public demand to “Release Ai Wei Wei”, and the third image, the well-known photograph of a burning Tottenham building during the riots.

This is the first and final piece, the one you must pass on the way in and out of the gallery. On the way in it is easy to query the artist’s decision. Why show the other two images, when the quote clearly references the third, or indeed, if we can already see Tottenham in flames in our minds, why show it at all? It makes more sense the second time around. If not for the contextualisation of the article, the appropriated quote would be equally at home (or not at home) in any of these photographed environments. Indeed, the implied commonness of the Wikipedia search removes authority from the pictures such that they seem to signify the common protest image as much as they do their particular circumstance. Just as the censored tombstones and unmarked placards have been made general, so these images are without clarity. It no longer seems important that the text should relate to any one image, event, or ideology. It has, after all, already been notably distanced by translation of language, place, and time. 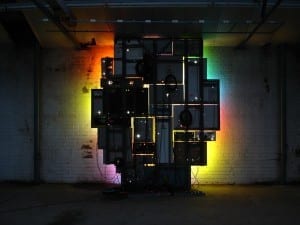 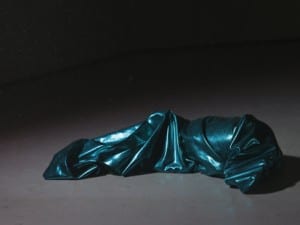 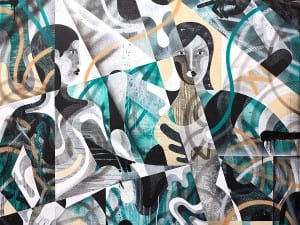