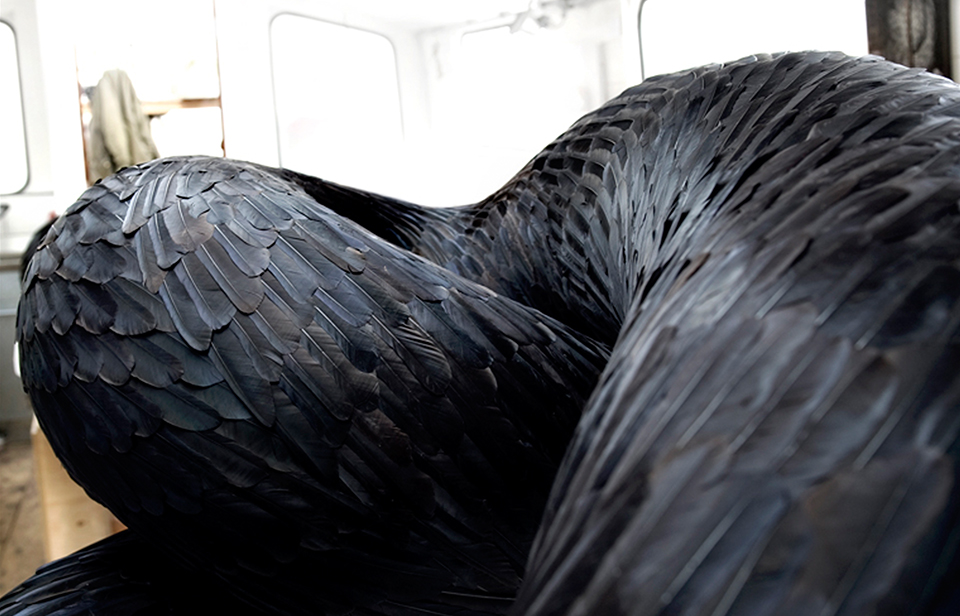 The body in art is nothing new. In the last 60 years, through the ear and nose sculptures of John Baldessari, Judy Chicago’s The Dinner Party (1974-79) and Magdalena Abakanowicz’s Nierozpoznani (2002), this focus has been brought down to the composite elements of the human form. Furthering this discourse, a new collaboration will concentrate this elemental focus through the work of Alice Anderson and Kate MccGwire and their use of these basic components, reflecting not just the human body, but in the work of MccGwire, nature itself. Each artist is contributing a site-specific sculpture in All Visual Arts’ new permanent space, with the works creating a monumental and immersive experience, overpowering the space with their otherworldly presence.

Alice Anderson and Kate MccGwire both work in sculpture, but with varying approaches to the medium. Anderson has engaged in a continual narrative based around childhood anxieties and synthetic dolls’ hair, in the same red as her own hair, which has dominated her work. Last year she filled Riflemaker with thousands of metres of the material, flowing organically through the rooms and along the façade in an extraordinary cross-examination of visual motifs from her childhood and the fictitious nature of memory. MccGwire creates sculptures that interrogate the essential duality between the senses and reason that lies at the heart of human existence. Feathers have featured prominently in her work since 2007, representing this duality in the animal kingdom. Inherently beautiful, sensuous and unique, their roots lay the practicalities of the warmth and transportation of the birds from which they come. With a common desire to create site-specific works on a monumental scale, MccGwire says of the collaboration: “Alice and I have wanted to work together for a while. AVA has been brilliant in that they’ve trusted in our joint vision and given us free rein to make whatever we wanted.”

Anderson’s Fort-Da comprises ropes of the red dolls’ hair repeatedly wrapped around a three-metre bobbin. It is part of a full body of work referencing notions of childhood memory that will be shown at the Freud Museum from 15 April to 5 June. Fort-Da was a game invented by the grandson of Sigmund Freud when he was just one-year-old, which evoked profound memories of Anderson’s own childhood rituals and anxieties of losing her mother: “The terrible fears I used to have when I was a child left alone at home for many long hours.” Anderson describes the rituals that she would invent “to calm my anxieties” including “undoing the threads from seams and winding these threads around parts of my body and other objects.” As the ritual grew, Anderson turned the focus in on herself, and began using her hairs in place of the threads. Even today with her incredibly long follicles, you wonder if Anderson maintains this ritual of comfort and anxiety outside of her artistic practice.

The ultimate theme and tool in Anderson’s work is this recollection of memory.In these recollections and interrogations Anderson recognises the emotional nature of time in the human mind, and how our memories, particularly of our childhood, are manipulated by the passing of time to become something entirely new, something so unrecognisable from the actual events (of which we can of course never prove, only reminisce) as to be almost a work of fiction. “I play with the dislocation of time in the same way that children construct parallel worlds.” Through these ideas of childhood ritual, Anderson also speaks of its ramifications outside of the family: “I am interested in the emotional tensions that occur as a result of the exercise of power. The family is the footprint of all political organisations. It’s an original unit where we have many aspects of relationships and cultural traditions. In the mother-daughter relationship, there aren’t two actors, but three. Power is the third element.”

In this manner of repeatedly referencing her relationships, psychoanalysing and questioning the boundaries of time, it is apt that a substantial body of Anderson’s work should be showing at the Freud Museum. Its combination of the analytical with art and science, paralleling not only Anderson’s studies into memory, but also her use of the scientific and the synthetic in evoking the organic. Anderson’s works at the Museum focus on Anna Freud, daughter of the great psychoanalysist and pioneer of psychological studies. At the Freud Museum, Anna’s loom is appropriated for Anderson’s sculpture as the dolls’ hairs are woven into ropes and bindings, which are then used to create Grids and Confinement Room, referencing not only the repeated ritual of weaving on a loom, but also the suffocating nature of family relationships. For Anna, practising in her father’s field, his reputation must have been overwhelming, and the tautly formed, claustrophobic ropes of the works reference this, alongside Anna’s own decision to remain in the family home long into adulthood: “Knowing that Freud stated once that the activity of weaving was a cover for ‘genital deficiency’ [I had] to have her loom as a starting point of the exhibition!”

In a long tradition of female artists, Anderson explicitly references her own body in her work. The dolls’ hair is inherently wound into Anderson’s identity as a redhead, carefully considered, and methodically wrapped all over its surroundings as a maternal feminine force, enveloping the atmosphere and the viewer in its beauty and benevolence. But Anderson argues too for a juxtaposition in the work through the masculinity of the regimented grid system: “The conjunction of the masculine associations of the grid, with its claims to disembodied abstraction, with the corporeal, feminine associations of the dolls’ hair.”

Similarly to Anderson’s use of dolls’ hair, MccGwire has increasingly been using birds’ feathers as the building blocks of her work. MccGwire’s Corvid is a huge, jet black, feathered serpentine being, that becomes an imposing force beside Anderson’s childlike creation. Tightly wound around itself, it is an endless being with evocations of power and restraint, and MccGwire’s choice of crows’ feathers creates an ominous alliance with this most foreboding of birds: “Throughout history, crows have been regarded as deviant, as the bearers of bad news. I’ve tried to make it look as though it’s writhing, as though the deviant is in the process of becoming more aberrant. For me, it’s as if the material, and thus Corvid, becomes a physical manifestation of a state of mind.”

The materials contrast with the synthetic nature of Anderson’s dolls’ hair in the nomadic manner of their collection and inherently organic qualities: “You could see the pairing of the two as a kind of dialogue between the perfection of nature and the imperfection of man … I’ve only ever used organic materials, or products of organic materials such as paper.” Using feathers over the past few years, MccGwire is attracted to their otherness: “When you find one on the ground they always look so utterly separate from the bird they’ve been discarded by. It’s difficult to imagine when you look at a quill that this flesh-less stem was once attached to a bird.”

Thus, Corvid addresses the process of ritual and myth-making, and the manner in which we still partake in traditions today, unaware of their creation and original circumstances. In questioning these accepted notions, and subverting the context, MccGwire can lead the viewer to challenge the status quo. MccGwire is fascinated by “the way we can be drawn to certain materials, but repelled by them at the same time – the familiar, when seen out of place, can throw you out of kilter. I’m slowly exploring that fine line, trying to subtly unsettle the viewer in some way.” Through using the feathers from crows, the artist engages in the predator-prey dichotomy: “The work’s very existence relies on the fact that these birds are shot for being pests, for damaging crops and killing off fledgling birds.” Collecting feathers after these culls, MccGwire describes her relationship with the materials as “more symbiotic than predatorial.”

This juxtaposition is continued in the subversively aggressive form. This aggression when combined with Anderson’s Fort-Da creates an immersive body of work that questions our part in the environment and the otherness of materials, not only from people, but also from animals, once they have left the body. Taking on the cylindrical nature of life, these new installations reference their materials through a constant process of loss and renewal. 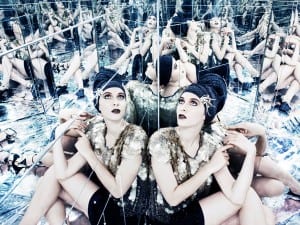 Each issue of Aesthetica features works by rising stars in photography from around the world. The following images are a highlight of this year’s works. 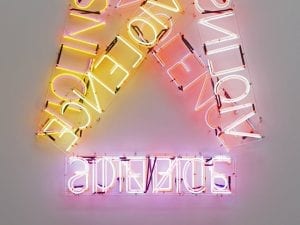 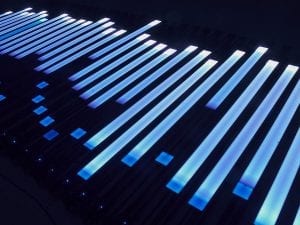 From interactive spaces to emotive machines, this year’s Aesthetica Art Prize shortlist is rich in the possibilities of installation art.