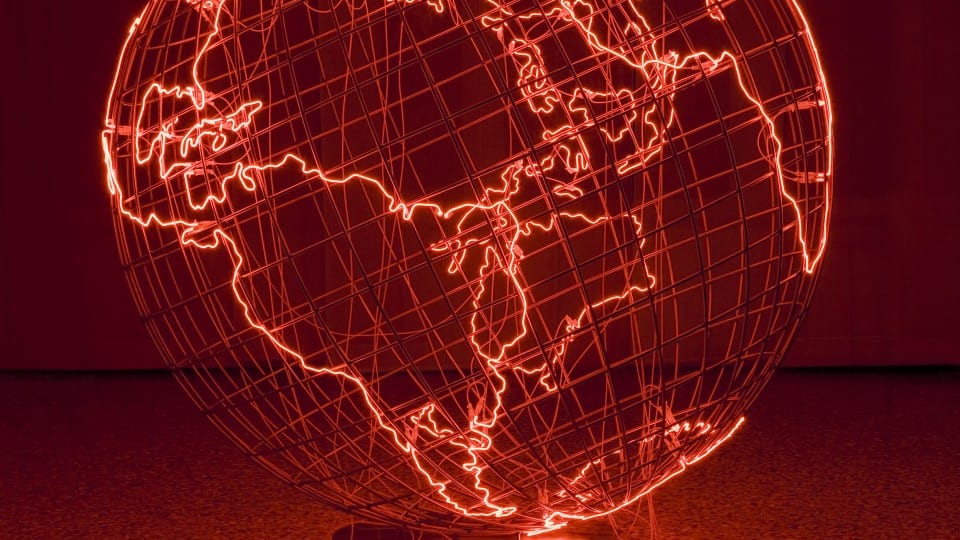 Drawing on her expansive career, this exhibition will reflect 35 years of consistently poetic and radical thinking expressed through a diverse range of media. There will be more than 100 works from the 1980s to the present day, from early performances and video to sculpture, installation, photography and works on paper.

Hatoum began her career in the 1980s with performance and video works in which the body gave expression to a divided reality, besieged by political and social control. In the video Roadworks 1985, she documents a performance where she walked barefoot through the streets of Brixton with a pair of Dr. Marten boots tied to her ankles.

The body has always been central to her work and she is known for referencing its vulnerability and resilience, as in Corps étranger 1994, an endoscopic journey through the interior and exterior landscape of the artist’s own body. Her installations also situate the body as subject to power or incarceration, evident in Impenetrable 2009, featuring a suspended square formed of hundreds of delicate rods of suspended barbed wire. In Light Sentence 1992 walls of industrial wire mesh lockers and a single moving lightbulb create dramatic shadows that transform the gallery into a disorientating and unstable place. Furniture and other familiar objects feature prominently, often modified and scaled up, to reveal the fine line between the familiar and the uncanny.

Born in Beirut in 1952 to a Palestinian family, Mona Hatoum settled in England in 1975 after war broke out in Lebanon. Her work highlights the condition of displacement, shared by many in the modern era. Present Tense (1996) is made from 2,200 cubes of traditional olive oil soap from Nablus, a city north of Jerusalem. Lines of tiny red glass beads pushed into the surface depict the map of the 1993 Oslo Peace Accord. The recent installation Twelve Windows 2012-13, consists of twelve pieces of embroidery made by Palestinian women living in refugee camps in Lebanon. The delicately embroidered “windows” are suspended on criss-crossing steel cables, each one representing a key region of Palestine through their unique motifs, stitches, colours and patterns.

Hatoum was nominated for the Turner Prize in 1995; received the Joan Miró Prize 2011; and will be awarded the Hiroshima Art Prize in 2017.