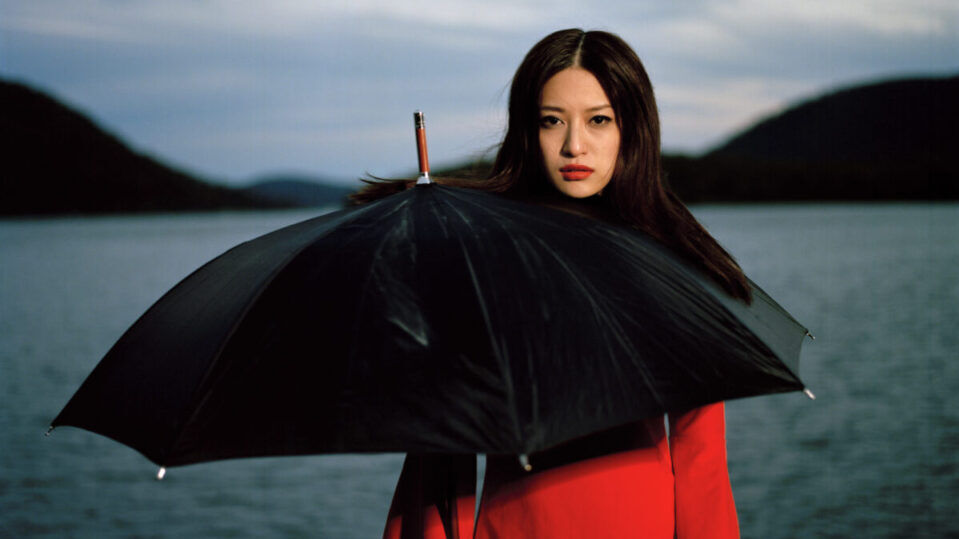 Kuzma Vostrikov and Ajuan Song work collaboratively to explore the intersection of fine art, photography as well as the idea of authenticity.

Kuzma Vostrikov and Ajuan Song’s richly saturated, theatrical and symbolic images focus on costume, character and allegory. In a dream world of strange and alluring portraiture, the viewers are presented with a host of archetypal images, hybrid creatures, surreal motifs and canonical postures, as well as inversions of historic art references. Dual heritage also plays a part in the experimental images; Vostrikov was raised in Russia, whilst Song was born in China. These bold parallel worlds sit between eastern and western cultures as a marriage of colours, forms and iconographies.

A: Your works have been defined as a “new genre” of narrative portraiture that pushes boundaries and transgresses a singular definition. Can you elaborate on your style and how you break away from convention?
KV & AS: Portraiture is a genre unto itself. Western art history says it is impossible to invent a new genre, but it is possible to move deeper into a subgenre. In the past, narrative painting commented on mythology or global historical / religious events. Today, artists work as if for themselves rather than for a customer; the photographer is largely able to comment more specifically on issues that interest them. It has become impossible to represent the entirety of culture as we know it. We, for example, believe that staged photography should work to tell a story. However, if we’re going to discuss innovation, then it’s appropriate to talk about the context of the portrait. Essentially, for us, it’s a question of enriching photography-as-a-handicraft with existential content – the tail of the comet for personal and philosophical concerns.

A: Portraiture has been altered irrevocably through selfie culture. Filters on Instagram allow users to augment and distort their faces, taking on completely new identities that are adaptable and ephemeral. With the release of Apple’s iOS14 system, “memojis” now act as avatars in our place; they are a way to be identified through emails and messages. How do you respond to the changing idea of the self and technological innovation?
KV & AS: It’s almost the same as saying that, thanks to a new 200-megapixel Chinese web camera, Tarkovsky’s films no longer have any value. We’re not applying red-hot metal from open-hearth furnaces to the palms of our hands. Nobody is swimming across the Atlantic, flying to Mars in a hot-air balloon or chasing a Tesla on a bicycle. Civilisation has been jealous of culture for a long time now and it’s a sucker for splashy statements. Although we’ve invented helicopters, transistors and cophasal arrays, we still pull teeth with pliers and execute people in electric chairs. Augmented Reality arrived several decades ago, and was used in Indian films, to make just one reference. Walt Disney distorted mouse faces and ears. Look at how children draw portraits: naively, purely and grandly. No Rembrandt or Spongebob can make them any better or worse. Museums won’t roll over in their coffins when the latest gadget starts vibrating.

A: Popular culture is deeply embedded within the public psyche, from art, psychology and literature to advertisements and 21st century spiritualism. Your latest title, Absolutely Augmented Reality, responds to contemporary culture, exploring identities – how we project ourselves based on the images that surround and influence us. How do your works make sense of this?
KV & AS: Today’s information fields offer us a million things to drown in. Spontaneously, visual culture came to the rescue of global finance as an institution. Instagram gives rise to new social patterns of behaviour: silicon lips; sterile interior design; the projection of success, prosperity and happiness. Financial insolvency, emptiness and boredom are perhaps still the actual foundation of the users behind the shiny profiles. We’re commenting on the construction of contemporary identity more than directly critiquing it.

A: How do your works provide a creative assessment of individuals playing the role of consumer, as well as of themselves? How are the two ideas linked?
KV & AS: In the social sciences, the Observer’s Paradox refers to a situation in which the phenomenon being ob- served is unwittingly influenced by the presence of the ob- server / investigator. In physics, Heisenberg’s Uncertainty Principle says you can’t measure an object’s speed and its precise location at the same time. Someone who organises a critical artistic experiment is also a participant, and they ultimately influence the outcome. In other words, the critical and creative exist symbiotically. As an investigator ponders any category of modern culture – consumption, for example – they can then, in turn, be affected by the question being asked. They are inside the environment they’re studying.

A: The works are also often a reflection of your cultural identities, heavily referencing iconography from America, Russia and China. How do these influences connect and contrast within your photographs?
KV & AS: In the professional sense, the modern term “artist” can be translated as someone who breaks the canon. In the last hundred years, practitioners have been receiving dividends by breaking laws, as well, for consciously crossing over into criminal acts. Contemporary art and politics are gradually moving closer together. In music, seven notes let you compose complex works. Our background was originally international. We love moving freely and mixing the building blocks of meaning. Despite the globalisation of consumption and mass values (the news, TV, cars, fashion, social patterns, etc.) we don’t believe that cultures have been homogenised; they are still locked in secret confrontation with each other. International iconography, when you look at it closely, is nothing more than the tip of the iceberg, which keeps our curiosity held underwater.

A: In many of the pictures, you arrange or rearrange bodies, symbols, costumes and imagery to create a parallel world. What is the significance of producing this kind of cultural, self-contained microcosm?
KV & AS: In large part, it’s self-therapy. We worked on the projects of Absolutely Augmented Reality in an enormous hangar in dusty Bushwick in New York. It was our secret theatre. Around us, on the neighbouring streets, machines milled flour and mixed cement, and frozen fish lay around in industrial refrigerators. We collapsed, blue from exhaustion, after our shifts at work. But in the morning, we felt like running right back to that dusty hangar once again, a place where so many talented people were gathered.

A: Your works are filled with narrative, utilising mise-en-scène. How do you plan each composition?
KV & AS: At first, we planned to shoot 100 concepts for the book. Previously, we had improvised a lot and we were tired of spontaneity. We wanted to give it some thought: to make sketches and then shoot, like they do in the movies. Even though it was a little static – a little stop-and-start – there were so many levels of freedom and stages of productive preparation. First there were discussions, then textual descriptions and then drawings. These illustrative diagrams still only show less than half of the end result, because contrasts and visual conflicts come about from the characters but also with the entrance of costumes, environments and elements on-set. The team discussed the drawings to flesh out details. Often, problems came up along the way which made us change course, offering new versions of that particular world. For example, it took us several weeks before we could start shooting for one image titled Quantum Entanglement, be- cause we needed to use the hatch on the hangar’s roof.

A: Do the images connect in some way?
KV & AS: We are deeply inspired by classic cinematography. The films of Luis Buñuel, Ingmar Bergman and Federico Fellini brought our dreams to the screen. The resulting images are united by a common rhythm. Fellini’s 1973 comedy drama Amarcord worked as a kind of template for exploring a sense of subjective truth, putting the personal and individual in direct opposition. We often think of the book in terms of this kind of visual dialogue. A message shining out from one lighthouse has a single meaning, no matter how scattered it might seem at first glance, or where it breaks up across the water or through the clouds. Absolutely Augmented Reality is, in a way, a kind of lighthouse like that; it offers various fragments of the same message. Diverse pictures, landscapes and characters are elements of the same overall expression. The project, overall, is a performance.

A: What motifs do you keep returning to? Are there any ideas that recur, either visually or structurally?
KV & AS: We ponder existence. Like flying fish, we try to jump out over the water for a moment, only to belly flop back down again. We were tired of updating our software, operating systems and product lines. Absolutely Augmented Reality is, in essence, anti-marketing. Increasingly, we return to what cannot be bought: no penthouse moves you any closer to the moonlight; no swimming pool can replace the salty ocean; no prostheses, implants, vitamins or exercises can halt or turn back the ticking of the clocks.

A: Do you believe authenticity exists? Is it an important element to consider when taking a photograph?
KV & AS: Today, technology is helping us to create and print out not just copies of ourselves, but also our fears. However, we believe an authentic statement is absolutely possible. Photography, if you took it apart from the technology, down to its bare parts, is pretty boring. The most important adjustable variable is light. But we must consider why a robot or Artificial Intelligence system can’t compete with a human being when it comes to writing music or novels or taking pictures. When we make art, we are working to explore human issues. Mysticism, magic, miracles, talent, good luck – for us, those are the chief elements of photography today. 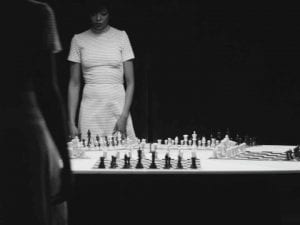 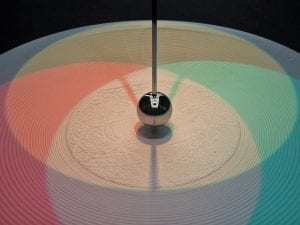 The arts industry, like any other, still carries a certain amount of imbalance. Ahead of Future Now, Amira Gad, Serpentine Gallery, looks directly at the issue.