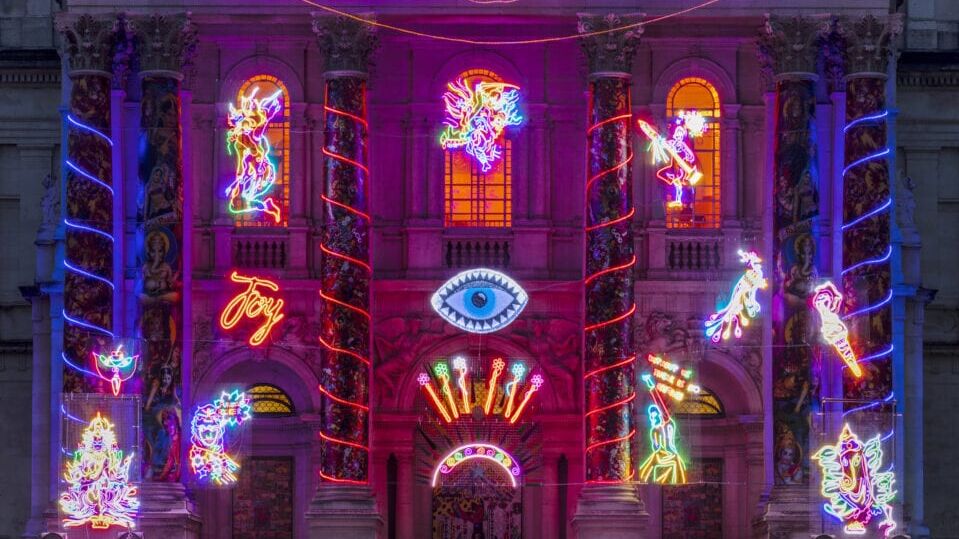 Chila Kumari Singh Burman (b. 1957) is celebrated internationally for her radical feminist practice, drawing on Punjabi and Liverpudlian heritage in multimedia works. For this year’s Winter Commission at Tate Britain, the artist has transformed the front of the gallery building into a celebration of bright lights and swirling colour. Remembering a Brave New World transforms the figure of Britannia, a symbol of British imperialism, into Kali, the Hindu goddess of liberation and power.

A: If you had to describe what you do in one sentence, what would it be?
CKSB: I’m a printmaker, I paint, I draw, I make mixed media, short films and videos. I don’t think about what I’m going to do beforehand; I naturally work around colonial history, personal memories and family.

A: Tell us about the title of your latest work Remembering a Brave New World?
CKSB: I was introduced to Aldous Huxley during my hippie days. Everybody was talking about him in the 1970s. In terms of the title, we’re remembering past days, now we’ve got all this time to reflect. We can still find inspiration from the past. We’ve also all got to be a bit brave right now.

A: Huxley’s Brave New World was released in the 1930s, so there must have been a kind of resurgence when you discovered it in the 1970s?
CKSB: I think it’s because of the drug era. The Beatles were thinking about Transcendental Meditation. It is interesting that Huxley wrote in the 1930s and that it’s being talked about more now. I talk to people at the Tate steps, sitting next to people they’ve never met before. It’s almost like a 1960s hang out! Everyone’s chilled out. One person was meditating next to the museum, cross-legged on the floor. It does take me back to Glastonbury or Woodstock, I’d no idea it was going to turn out like this.

A: You often reframe your older work in new contexts. Remembering a Brave New World is made up of previous works like Punjabi Rockers and Candy Pop and Juicy Lucy. What role does memory play in your work?
CKSB: I think about my childhood memories of Bollywood and what we did in the kitchen – stuff we ate. We played in the street and used to make up our own games like hopscotch and marbles. Those memories never leave you. I seem to have a better memory of my childhood than what I did five minutes ago. I believe in a lot of stuff to do with spiritualism, Buddhist philosophy, Hinduism – I think the essence of being good at what you do is being inquisitive.

A: I’ve read that you want to “critique buildings that are very Eurocentric.” Your installation at Tate has transformed its conservative Neo-classicist façade into a kind of Hindu temple; a vibrantly rich tapestry of pattern and colour.
CKSB: Maybe that’s because I look at the temples when I go to India. We’d go to the temple regularly and maybe that crept into it. But I definitely didn’t have the temple in my head at all. I was also watching episodes of Jhansi Ki Rani on Netflix regularly, there’s about 20 episodes. I was getting some ideas from the palaces from the Mughal period (1526 – 1857). They gave me ideas of symmetry, so I made sure the pillars are equal on each side.

A: How did you go about creating an installation of this scale?
CKSB: I got asked to do it two weeks before the COVID lockdown. I printed out the Tate architectural drawings on vinyl so I could stick things on and peel things off. This is when I noticed it looking like a temple. In my studios I’ve got bits of everything and anything: Bindis and stuff from India, I call it “junk.” It was all photographic at the start: me doing martial arts, a dancer friend. I wanted somebody to look physical, in an active position. I even went down the Western road – like Lara Croft and Wonder Woman – but I thought: “I need my Punjabi girls looking really funky.”

It just coincided with Diwali, it wasn’t deliberate. I was going to put deities on anyway because I like Kali, Shiva, Ganesh and Hanuman. I didn’t have Lakshmi in my remit, but my Indian relatives said Diwali always has Lakshmi and they told me off – so I put Lakshmi in! Then I started to draw them using felt tips, crayons and oil pastels. That’s how it all came about. The only reason all the colours are in there is because the neon fabricator sent me all the colours are available. I just stuck with using all of them. I was dead fortunate because he was white South African and lived in Durban most of his life. I said: “You know you must be familiar with Indian colours because Durban’s the second biggest Indian place after India.” I bet you any money if it was an English person making them, it wouldn’t have turned out the same.

A: You confront many recurring themes of British Asian identity whilst satirising stereotypes of race, class and gender. Have you felt like you’ve had to fight twice as hard to make it as a South Asian woman artist in a white, male dominated industry?
CKSB: Oh definitely, totally. I think a lot of people can’t get their head around why I use this Asian stuff. People have made really cheeky remarks about me trying to prove my “Indianness”, and if they’re in my studio I say: “Would you kindly please leave because you really don’t understand me.” I really can’t have people talking to me like that. I’ve also had to deal with white male curators. I had to take on both curators of the show The Place Is Here about 1980s artists in Britain. I really gave them a hard time; we used to fight.  I’d say: “You wouldn’t think this show had any Asian artists in because you prioritise African Caribbean artists.” It’s crystal clear by all the reviews. I was fighting this alone because I wasn’t getting support from the other South Asian artists in the exhibition.

All these galleries send emails saying: “We’ve done a lot about racism, but we know we’ve got to do a lot more.” Honestly, I don’t think they’re referring to us South Asian artists. I have to be very careful, but I can say that now and I’m starting to say much more. Now Remembering a Brave New World has been a hit, it’ll put South Asian culture on the map. Even in India they’re talking about me. I think it’s gone global – people in New York are saying “why can’t we have something like this?”

A: Your installation has become a London hotspot. Did you anticipate this kind of reaction?
CKSB: Absolutely not! I’ve been to the past Tate Britain Winter commissions and never thought in my wildest dreams I’d find anybody sitting on the steps. In fact, when I saw people there, I asked if they were cold and they said: “What you’ve made doesn’t make us feel cold.” They saw my work all over Facebook and TikTok. I can’t believe it! I am genuinely blown away. What does move me an awful lot is the children full of joy, running around the ice cream van and tiger. That is the sweetest thing.

A: What can we expect from you in 2021?
CKSB: I’ve got a few more outdoor commissions. I’m going to show at the Grundy Gallery in Blackpool and with Manchester City Art Gallery. I don’t want to do it next year though. I’m waiting till 2022 because then, maybe, things will be better in the art world. In Manchester they’re opening a South Asian museum. I think it’ll be ongoing now like this – there’ll be something else and something else. 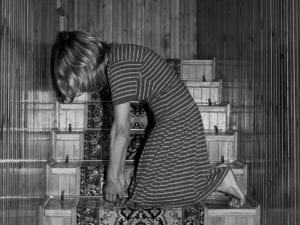 Joanna Piotrowska’s artwork, on view at Tate Britain, dwells on the dynamics of power, often expressed within uncanny domestic spaces. 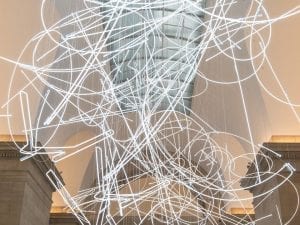