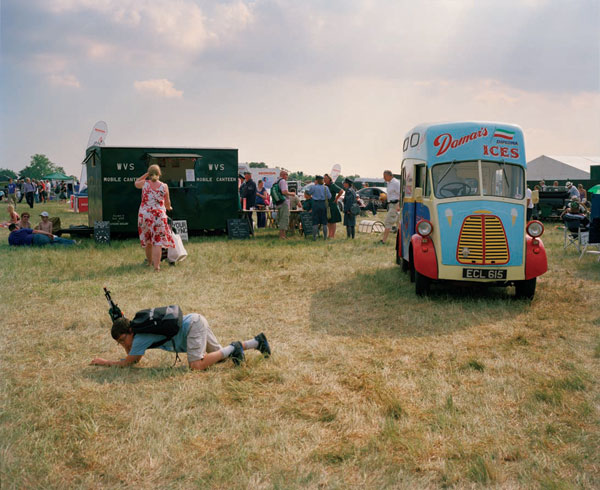 Uniting three related photographic collections, Melanie Friend’s The Home Front at Impressions Gallery, Bradford, explores the civilian experience of war. With a particular focus on public air shows that take place at Royal Air Force bases, and in the skies above seaside resorts, the images are stark and objective in their depiction of army-related activity. The first series details large beachscapes that are temporarily militarised by the fleeting roar of fighter jets, whilst children and holidaymakers look up from below. Nostalgia for World War II is evoked by the display of “warbirds” such as the Lancaster Bomber, whilst contemporary jets such as the Tornado, recently deployed in Iraq and Afghanistan, also appear.

The second series exposes the public attraction of air shows. Frequently billed as a fun day out for the family, Friend captures the humour and unease in scenes of visitors taking tank rides, handling weapons, or trying on military uniforms. These air shows also offer opportunities for military recruitment and the commemoration of past conflicts.

For the third series the photographer offers a rare glimpse into the environments of international arms fairs and air show trade days, usually off-limits to the general public. Her images depict how military technology and services are marketed and sold, from the latest drone aircraft and gold-plated automatic weapons, through to special effects for simulated battle wounds.

Brought together in The Home Front the three different series reflect a variety of angles of warfare in a controlled environment. Neither commenting on her findings or emphasising specific details, Friend is able to portray an unusual scene where war is separated from violence and is instead viewed as a form of entertainment. 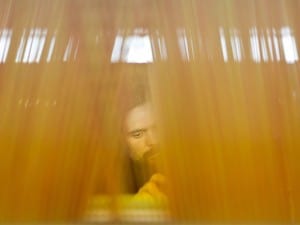 Open for Business at the Science Museum, London

Open for Business is a vast collection of over 100 dynamic and diverse images from nine leading Magnum photographers, including Martin Parr, Chris Steele-Perkins, Stuart Franklin, David Hurn and Peter Marlow will provide a behind-the-scenes look at contemporary manufacturing in the UK. 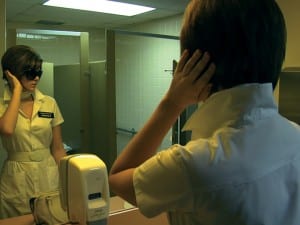 Bradford Film Festival revisits the classics while keeping its content fresh and up-to-date in the facilities of the National Media Museum.

Opening on 20 March, Thirteen marks the 450th anniversary of Shakespeare’s birth and is the first time the pieces are on display outside of the Royal Shakespeare Theatre in Stratford-Upon-Avon.