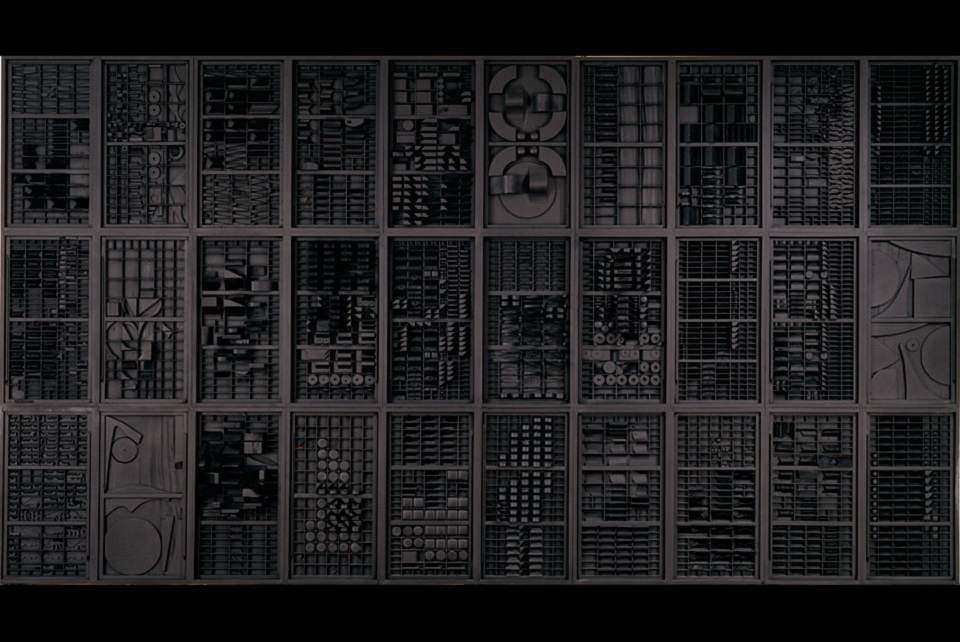 The assemblages of Louise Nevelson are at once triumphant and tragically human. Her design of how light and shadow manifests itself throughout her work resonates in a timelessly human way. At her first exhibition at Pace Gallery London, the gallery, situated in the prestigious and historical walls of the Royal Academy, has come alive with her ingenious forethought that was at the epicentre of illustrious career and life.

A free-spirited and driven woman, her friendships with leading figures of her time such as Cecil Beaton and Dieago Rivera and her affiliations to the loosely gathered abstract expressionists embedded an intrinsically evocative aesthetic within Nevelson’s work. Untitled (1959) and Untitled (1955) both consist of wooden boards with painted black geometric card overlays on top. On top of these, are collaged with wood, newsprint and foil in the former and sandpaper, foil and wood on the latter. These examples pre-date the term hardedge abstraction by Los Angeles Times art critic Jules Langsner, in 1959 but show an obvious significance to the cannon of art history to come as well as cementing her use of found materials painted black in her works to come.

Two examples of which, Untitled (c. late 1970’s) and City Series (1974), are both awe inspiring. Both are large wall hanging assemblages. Seeing the works for the first time, the viewer is exhilarated… exhilarated by what is evoked by peering into these blackened alien constructs. Deciphering where the shapes have their origins: who owned these materials before, why did they throw them away? In Untitled whereby castaway fans, furniture arms and legs are Frankensteined into a big black monster set against the seedy undertones of night-time. The work is placed on a dark wall light casts menacing shadows across the works rickety body in a cold and cruel way. The work retains the desperations and dangerous unpredictability that plagued New York in the 70’s and continues to do so. Looking upon the work, the viewer is paralyzed in a voyeuristic gaze as if they have witnessed a crime or sordid act.

In the City Series which resides on the other side of the gallery, light is once again at play, this time in a more calming manner. On a white wall, the work, which built from multiple rectangular grates of differing segments are overplayed by curved geometric panels echoing the blackened areas of her earlier 50’s work. The lights fills the grates and softly illuminates them like moonlight on a lake’s ripples. This illumination is joyful and harnesses the unknown that lies beyond New York’s city that never sleeps tagline.  Each grate glows like the distant windows of skyscrapers; which adds to the works already vast scale and in doing so harnesses the power to provoke or even a yearning for wanderlust and urban exploring.

The rebirth of an object. The piling to together and then erasing until a new object is born, is paramount to the prolific nature of Nevelson’s work and career. And to look at her work is the same. The viewer’s eyes are immediately set off by the ever changing darkness and light that a particular work finds itself in. As the viewers eyes adjust to the circumstance, the viewer’s eyes begin to settle and find more and more areas of beauty and friction. None more so than in Colonne II (1969). A tall, spindly free standing column, comprised of layering of elliptical and rectangular segments of wood, which demands the viewer circumnavigate it. In doing so, the different colour walls in the viewer’s background intensify the lights impact on the work. As such, the viewer cautiously manoeuvres the ever-changing surface which becomes louder and more visceral as the light and shadows weave intricately seductive patterns and new ghostly shapes. But as soon as they are discovered they vanish. A resonating human condition both melancholic and joyful overwhelmingly dictates the viewer’s interaction with the work.

This brings about a quiet and sombre piece that is perhaps one of her greatest: Maquette for Dawn Shadows (1976 – 83) a freestanding sculpture built up from a triangular base with welded steel arches and splinters that tumble and rise with grace of clouds. The works feels far more naturalistic and offers a reflective sanctuary from the encompassing intensity drawn out by Nevelson’s city works. Here, Nevelson’s ambition to permanently capture rising shadows of dawn is a lasting effort to acknowledge both her own and our inescapable impermanence. 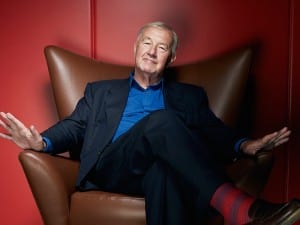 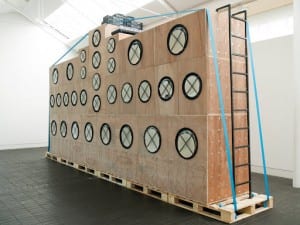 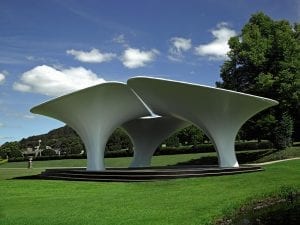