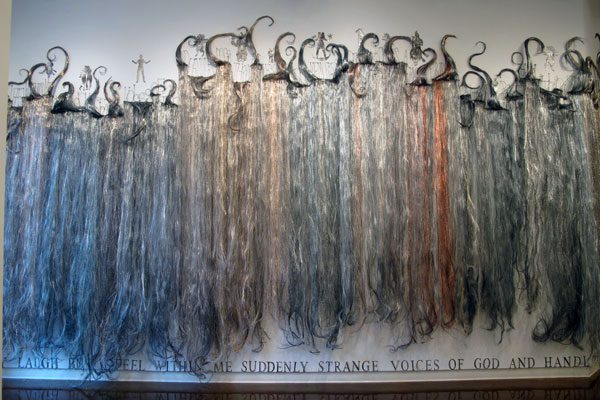 It can be said that art can serve as a universal language. Visual artist Lesley Dill applies literal meaning to art as a communicative agent by incorporating various forms of language into her multi-faceted work. Currently on view at the Halsey Institute of Contemporary Art in Charleston, South Carolina, Poetic Visions: From Shimmer to Sister Gertrude Morgan reveals a fusion of the visual with the verbal through an amalgamation of sculpture, fashion, installation, painting, and drawing.

The exhibition fills the gallery space of the Halsey, with elements of the two featured bodies of work covering the walls from floor to ceiling, while also sweeping through the center of the gallery. It’s a myriad of visual and textual imagery, matched by a breadth of references and influences. Yet, there exists an underlying unification through the words, figures, and symbolic imagery: it is Lesley Dill’s way of conveying her desire to render transcendental experience into form.

The work Hell Hell Hell, Heaven Heaven Heaven: Encountering Sister Gertrude Morgan and Revelation, consists of ten large text and image drawings with numerous paper skeletons dancing above, draping strips of fabric with words that form the train of a wedding dress worn by one of the figural sculptures, and another figural sculpture wearing a black dress, with both dresses woven with words.Brooklyn based Dill tapped into conflicting religious practices of the American South through her inspiration of folklore artist Gertrude Morgan, whose life and practice is abstractedly portrayed through the piece. Dill employs across the entire work a selection of Morgan’s writings with that of poet Tom Sleigh, Espriu, and Emily Dickinson. The scale and fluidity of the work exudes an element of theatricality, further evoking a mystic and other-worldly sense.

Shimmer falls across the back walls of the gallery, a waterfall of super-fine strands of wire and metal foil resembling long, silvery hair. The sixty foot long piece includes a surrealistic poem by Catalan poet Salvador Espriu depicted in metallic letters. The Halsey’s smaller gallery space houses Dill’s foil Allegorical Figures. According to the artist, “each figure represents an existential conundrum”, while reflecting Dill’s desire to understand the positive and negative forces of the human soul.

The entire exhibition seems to be a peek into the inner-workings of Dill’s imagination, a place where thoughtful interpretation has occurred. However, for the audience viewing Poetic Visions, interpretation remains unclear, which provides an opportunity for each individual to delve into their own pysche and decipher the meaning of the work for themselves. “Meaning in her work hovers at that place between the known and the unknowable,” said Halsey Director Mark Sloan, “There is a mystery that keeps viewers coming back.”

Images courtesy of the Halsey Institute. 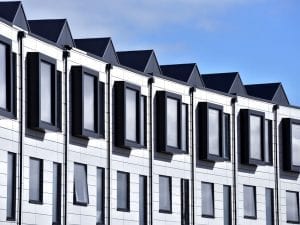 Aesthetica collates five must-see exhibitions that pave the way for the future of urban planning through sustainable methods and new materials. 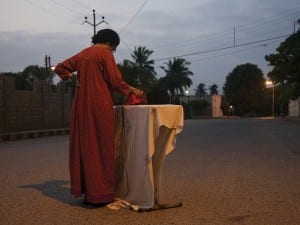 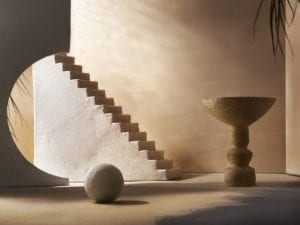 Photographer Charlie Goodge and Art Director Jessica Jung have paired up for an abstract series that parallels architecture and ceramics.