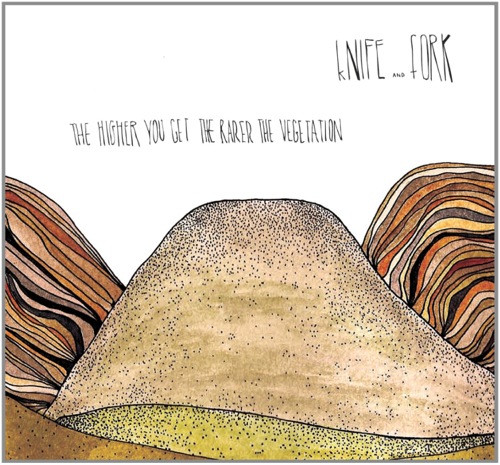 The Higher You Get The Rarer The Vegetation
Hornblow Recording

Multi-instrumentalist Eric Drew Feldman met Laurie Hall at a PJ Harvey concert and months later kNIFE and fORK was born. That was an event worth celebrating. This is a truly enthralling album and one that deserves the praise it has already received from the likes of The Pixies and Frank Black.

Recorded in part at Feldman’s home studio and at the infamous Hyde Street Studios in San Francisco, The Higher You Get The Rarer The Vegetation is the duo’s second release, coming eight years after their debut Miserycord in 2004. Taking your title from one of the world’s most celebrated Surrealists (Dalí) kind of means you’ve got to deliver and this doesn’t disappoint. From the low-fi beat of opener Tightrope to the beautiful Pocket Rocket and the mesmerising percussion of Nicotine, kNIFE and fORK’s songs are full of complex, surprising turns.

There are definite nods to Patti Smith, Incubus and the spectral howls of Bitch Alert, but don’t let comparisons define your opinion of this record. Listen to this album and let its intense and magical charm take over.