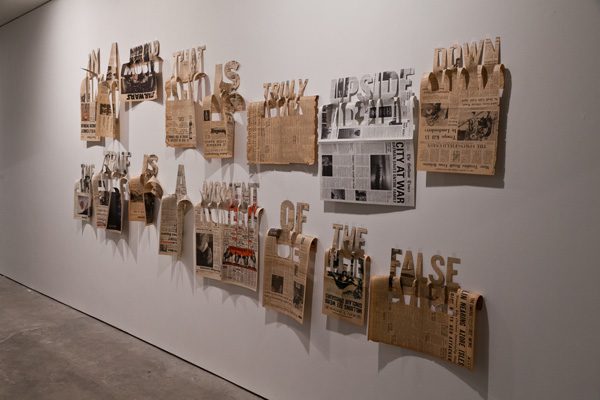 Kiss Me Deadly is the title given to a new group exhibition that has recently opened at Paradise Row. The exhibition, organized over two floors, explores the themes and moods of the film noir genre. Although the classic period of the genre is represented by a handful of films that emerged between the 1940s and 1950s, its visual and thematic characteristics, such as the isolated anti-hero or the surrealistic dream sequence, are inextricably woven into the fabric of contemporary cinema. Modern classics of the neo-noir genre are Drive (2011, directed by Nicolas Winding Refn) and Mulholland Drive (2001, directed by David Lynch). As such, a re-appraisal of the culture surrounding this genre, by a group of visual artists whose artistic sensibilities will have undoubtedly been heavily influenced by it, is both timely and apt. The range of works on display varies from paintings and photographs, to audio-visual and installation pieces.

On the ground floor, Simmons and Burke’s If Not Summer #2 explores one of the more seductive motifs of the film noir genre, the fantastical dream sequence, in a large-scale cut-and-pasted chromogenic print. A set of earphones located below the print provides a spooky soundtrack to the piece. The visual juxtapositions in the print- cartoon characters from recent Disney movies are set side by side with revered icons of the silver screen- commemorate LA’s illustrious cinematic history and, while this imagery (along with the kitschy sound effects) perhaps captures the aesthetic of Z-movies such as director Ed Wood’s infamous Plan 9 From Outer Space (1959) more accurately, If Not Summer #2 nonetheless contributes towards the prevailing dreamy tone of the exhibition.

After descending into the basement gallery, this mood is amplified by atmospheric effects such as the dimmed lighting and thick cloud of dry ice that envelop the visitor. Down here, Francesca Gabbiani’s White Book (2005), a cut paper foldout storybook, hits a high note in the exhibition. While most visitors would probably be more familiar with Gabbiani’s boldly coloured cutouts, the artist has abandoned her usual palette in this piece. This pared-back aesthetic thus compels the viewer to focus less on the visual impact of the work, and more on the narrative vignette that it traces, which tells the story of a naïve damsel in distress who stumbles through a rabbit hole into a parallel universe populated by the kind of morally-ambiguous individuals popular throughout the canon of the film noir genre

As is to be expected with an exhibition that attempts to blend together so many different perspectives on a single subject (there are over 10 artists included in the exhibition), some pieces in the show work more effectively than others. Overall though, Kiss Me Deadly offers a compellingly contemporary take on the motifs and moods surrounding the genre of film noir. 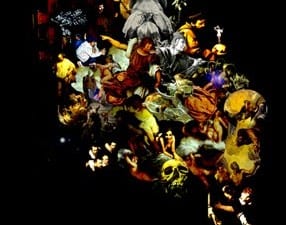 Mike Ballard – The All of Everything – Art will eat itself 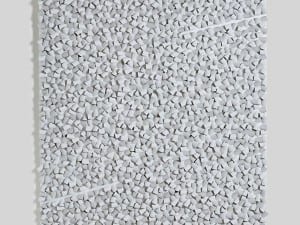 The second show at Dominique Lévy’s new London space will map the progression of the abstract white relief geographically and through time, with a focus on the 1930s to 1970s.