Joanne Tatham & Tom O’Sullivan: A Tool for the Making of Signs, Cardiff 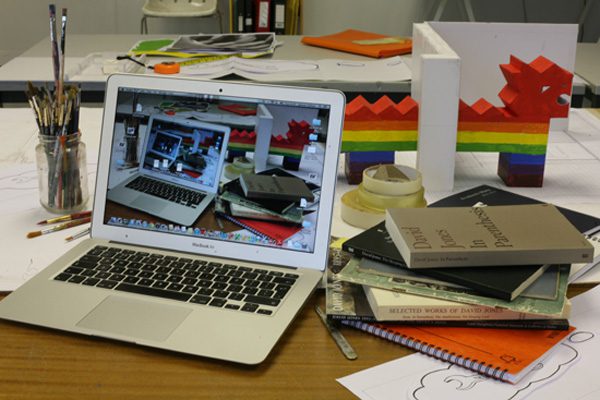 Recently shortlisted for the 2013 Northern Art Prize, artist duo Joanne Tatham and Tom O’Sullivan’s current exhibition at Chapter in Cardiff continues the artists’ interest in the construction of meaning, and in this particular instance, explores a notion of “Welshness” through a cunning concoction of text, image, object and curatorial strategy.

Upon entering Chapter, visitors are first greeted by a vast cartoon drawing dominating the façade of the building’s panelled glass “lightbox” display space. A caricatured sleeping policeman is dreaming of a giant spanner with the words “The Reiterative Grind” emblazoned on it. Within the gallery, offered up like an exhibition hand-out is a concertina-folded piece of print; on one side this sleeping policeman vignette appears again and on the other is a large-print replication of a critical text. However, the text is not about Tatham & O’Sullivan’s work, but about a watercolour called Chalice with Flowers and Seal (1950) by the mid-20th century Welsh painter and poet David Jones; famous for drawing inspiration from his Christian beliefs and Welsh heritage. Written by Welsh-born, Glasgow-based artist Merlin James, it offers a contemporary reappraisal and nuanced reading of Jones’ painting and illustrates how he manifested his Welsh and Christian affinities within his work.

The centrepiece of the exhibition is a huge stylised wooden structure of a dragon, that clichéd signifier of Welsh identity, bisecting the two main gallery spaces. Hand drawn black & white patterning continues Tatham & O’Sullivan’s cartoonish style, with a chevron motif up the dragon’s jagged tail mimicking the parquet flooring of the gallery. This seemingly innocent sculpture has an ulterior purpose, a Trojan horse of sorts, as a door situated on its hollow body leads to a secret chamber where the aforementioned painting by David Jones (Chalice with Flowers and Seal) is surreptitiously on display. In the furthest gallery space the exhibition concludes with the revealing of the front half of the dragon, as if breaking through from the other side of the wall. Its crescent-shaped mouth is joyously agape – but instead of fire, a distinctly Welsh woman’s voice reading Jones’ celebrated Arthurian poem The Hunt is emitted.

The various components or “tools” in A tool for the making of signs both lure and mislead; the cartoon image, the borrowed interpretive text, the totemic dragon sculpture, the re-staged David Jones painting and poem, are at once a series of clues and a set of diversion tactics for something just out of grasp, confounding easy interpretation. In response to a particular set of circumstances –Welsh identity combined with the conditions of contemporary art and art history – it seems that the artists have set themselves a challenge to get to the core of what all of these factors mean and how we can come to understand them. Through their use of appropriation, re-staging and re-mixing of potent symbols, signs and ideas, Tatham & O’Sullivan have cleverly choreographed a precarious situation that muses on the fundamental notions of representation, myth-making and provenance.

Credit
1. A tool for the making of signs, image courtesy of Chapter and Joanne Tatham & Tom O’Sullivan. 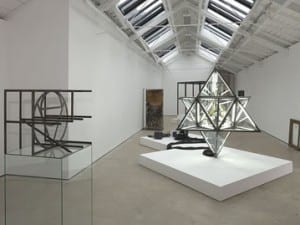 A Peep Through The Looking Glass, Alice in Wonderland, Tate Liverpool

Since their original publication in 1865, Alice in Wonderland and Through the Looking Glass have had an unprecedented influence on the visual arts.