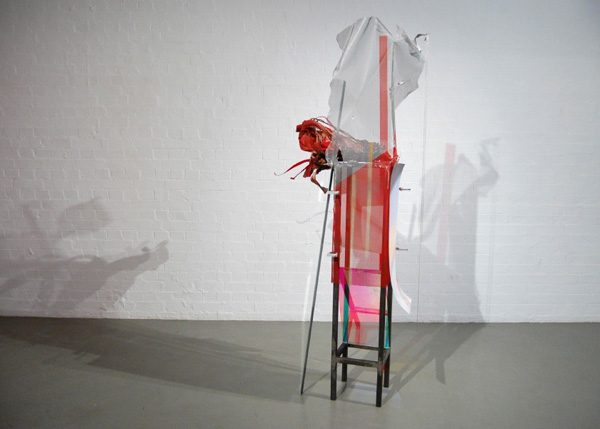 Samantha Donnelly is known for her experimental assemblage and collage works, which combine awkward and beautiful, often overtly feminised materials and images into telling combinations. Donnelly uses high colour and shiny textured surfaces: make-up, false nails and other feminine detritus amongst more robust applications of fabric, plaster, wood, sheet plastics and holographic papers. Donnelly comments on the territory of marketed, consumed and performed femininity. She also carefully attends to the evocations her work produces across the whole gallery space; individual works form lyrical pools of colour interspersing mass with line, the baroque and the modern, refinement with excess.In her new work Reception at Standpoint Gallery, Donnelly turns her gaze to corporate reception spaces, sites of welcome and of social / economic filtering. She reimagines the interconnected spaces at Standpoint as a series of ‘welcome areas’.

Aesthetica spoke to Samantha about her new exhibition, Reception.

A. Your new work Reception focuses on corporate spaces, sites of welcome and of social/economic filtering, can you explain your artistic concerns surrounding this?
SD: In 2010 Standpoint invited me to take part in a pilot project Standpoint Futures, a one-month professional development residency for artists based outside of London. I spent time in the gallery space back then and when I was invited to develop a solo exhibition one thing I was keen to do was work with the architecture to situate the work within. The space is unique – a long space which has a series of stages or phrases, all with different qualities of light including an old timber lift with cast iron shutters dissecting the space.

Much of my work is concerned with performance of the self and engagement of the spectator around the work, so I began thinking of a lobby or welcome space and how that could be played with. This resulted in the body of new work which plays out within the space as a series of objects and images guiding the spectator around and through the space, all presenting as helpful but offering a limited transference and a barbed, stilted engagement.

A. What influences have played a role in developing these concerns?
SD: This latest body of work is a progression of previous work which is an enquiry into how desire shapes and drives our contemporary lives fuelling the continuation of consumerism. The influences are many including my own experience as a receptionist and as a ‘service-user’ – both sides of the desk, both good and bad experiences from frustration to joy.

The work was in production for about a year on and off and developed in residencies I undertook in Berlin (where I made the ceramics) and in Rotterdam (where I worked on the resin). All of the photographic works were made in Rotterdam whilst playing with finessing the object(s) so they refer back to the process of making the work in an earlier form. This process and experience of travelling – and then transporting the work – influenced the decisions I made greatly.

A. Femininity and the aesthetic qualities of women play a large part in your practice, can you expand on this?
SD: I think previous projects have worked more with the idea of how desire is marketed to women and through women using ideas as the male / female gaze. The photographic prints in this show are a continuation of this work as there are layers of projections and collages reframed and photographed, creating a kaleidoscope of movement of the eye within the frame.

However the sculptural work in this show – although having symbolic objects such as gendered clothing – is far more gender balanced than previous works as I have used lots of roughly worked unfinished steel and rougher, hard-edged materials which are symbolically masculine. The formal manifestation also reflects a balance between the organic and the linear more than my work maybe has in the past. The use of slices of mirror and coloured Perspex within the work have the effect of reflecting the spectator into the work, where you suddenly become inserted or implied within the associations going on within the field, therefore the readership of gender is potentially more subjective.

A. How is this incorporated in Reception?
SD: One of the main materials used in each of the objects are identical faux-Hermes neck-scarves dipped in resin and moulded over plaster. The pattern on the scarves is of a leopard – you can make out its eyes in the print – and these items of clothing are entwined with the seams taken from slips and other under-garments. I was interested in the ides of the inside structure and the outside mass and how this might be revealed or conversely coloured over or edited to display a certain face or sense of self; many of the scarves are heavily spray painted into red like blood or beige like false-tan. These surfaces and lyrical elements are taut and frozen, displayed you might say, on roughly worked steel plinths with cage like expanded steel booths. These reflect the ideals of corporate values; of being straightforward but actually being far more complex, limiting and convoluted than the outward presentation might at first suggest.

A. Your work is predominantly sculptural, what attracts you to work with this form and what are you hoping to achieve through this?
SD: The main reason I make objects is that I am fascinated by the immediate engagement, the physicality of stuff on the body, followed by a continual unfolding, objects can offer the audience. This is from objects from Antiquity, through Modernity, to temporal transient objects and video / photography / drawings offered or posed as sculptural matter.

I trained in media arts which was a combination of film, photography, sound, installation and performance back in the 1990’s when all processes were still analogue. Then the digital revolution happened and suddenly processes of making happened on a lap-top, which had a different engagement and physicality to it. One of my interests is in having a physical relationship with stuff and so over the years I have been to night-school, worked in the studio and undertaken residency programmes to develop skills such as bronze casting and ceramics. My approach to working is coloured still through photography and my training but now I very much embrace the simplicity and speed of the digital. My process is two staged where I work in the studio to make with objects / materials and then document the day’s events via a still camera, after leaving the studio I re-visit the work in 2-dimensions on screen which gives me a critical distance.

SD: After a short break I will be back in the studio working on developing ideas for a solo show next year at Ceri Hand’s new permanent gallery in the West end opening in September 2013. 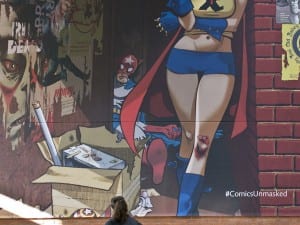 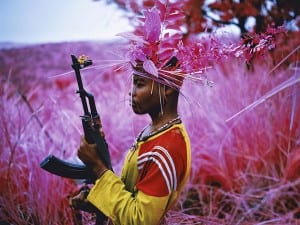